A once in a lifetime friendship 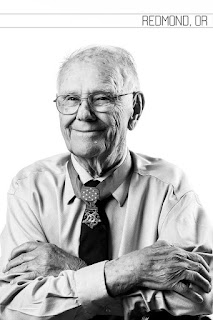 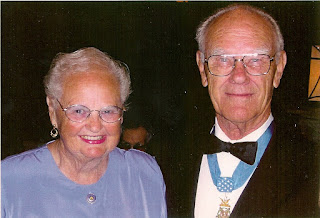 I fight to remember the first time I saw them.  My memory just sees them as that cute little old couple towards the back of the room.  The only couple in the room full of mainly men.  I do remember sitting with a cup of coffee and chatting with them.  They were...easy to talk with.

One of the guys took me to the side and said, "That guy got the Medal of Honor.".  "Oh, really?", I thought.  I remember looking at the average build kind man and could not vision him storming a pill box taking out a group of Germans single handed.  That 'John Wayne' vision was what I thought of that medal.

I think it made me step back a bit.  I probably skirted their table a bit...feeling somewhat unworthy, I guess.  But, they both always had a smile on their faces and sought me out with a bright hello.  'Love' seemed to radiate from them and soon I was back with my cup, chatting with them before one of the meetings.

They didn't live in a big house up on the hill.  They had a small mobile home in one of the local lots.  Humble digs for a humble couple. It was the early days of my coming back out as a veteran so their warmth and acceptance encouraged me.

He had a birthday and a local retired officer made a huge deal of it with a big cake.  Bob just shrugged and went along with the fan fare.  I could see that he appreciated the gesture but certainly did not feed off of it.  'Just another day', I believe he said.

The more that I got to know them, the more I loved being around them.  Honestly, I don't recall an angry word coming from either and that is how I wish to remember them.....Loving.

In those early days, it was a rarity when Bea was not by his side.  I can only remember a very few like the time that he wanted to honor another close friend of mine, Bob Shotwell with a rock from Normandy beach.  We sat quietly at one of the LaPine meetings, him not wanting his stature to be greater than the honor that he wanted to bestow.

The two Bob's had a few things in common beside the war.  In fact, both of them had started up departments at our local college, COCC.  Bob Shotwell starting the Journalism dept and Bob Maxwell the Automotive.

I recall a day that Bob called me up and asked to have a cup of coffee.  I never turned down that opportunity.  Bob and I sat in a booth at Jake's and he asked me if I had any ideas for fund raisers.  He was trying to raise money for Honor Flights where they were sending WW2 veterans to Washington DC.

We threw back and forth a few ideas, when I looked over at the table next to us to find another friend, Don Devore, who owns a business up on the Sandy river and makes our T shirts and sweatshirts at Jake's.  I invited Don over to the table and in the conversation, one of us came up with the idea of coats.  It was something that most could afford and that could be popular if well received.  Don agreed to make the coats at his cost to help in the fund raising.

In a matter of minutes, the three of us had designed a jacket.  On the front would be the person's name and his service.  On the back, we would have "Band of Brothers, Central Oregon.  We all agreed that the back would look better with a logo of sorts.  About that time, a veteran walked in and on the back of his vest, he had a patch.  In the center of the patch was an Eagle.  "What of that?", I asked.  We found a picture of the eagle online and with that, the logo of the Band of Brothers was created.  In fact, the jacket that wear on a normal basis was the prototype for the jacket that became a uniform and a way to bring all of the now various groups together. 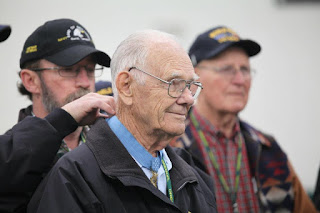 I was honored to put the medal around his neck three times.  Every time, it was an extreme honor.  The first time was just before I introduced him to the Oregon Ducks Football team.  Putting the medal around his neck was a far greater honor than talking to the Ducks on their knees in the middle of the field so you can imagine how I felt that day.  That day will always be a red letter day in my life.
We persuaded him to be the Grand Marshall for the Veteran day parade and Judy was able to ride them around in the back of her Model A.  My father rode up front and really enjoyed that parade.

Then, a few years back, he lost his partner.  I was in Portland at the time, watching a Lacrosse game that my grandson was playing in.  Friends kept me appraised of things as we all began to pray for Bea and him.  By the time that I got back to Bend, she was gone.  We had a huge service at Eastmont Church with a procession that led to the small cemetery close to Terrebonne.  Police from four different agencies blocked intersections so that we could get to the graveside together.  Our area had not seen anything like this.  A testament to how much the couple meant to all.

Bob began to falter in his health and many of us felt that he would probably follow close behind as we knew how much he loved Bea.  But God had other plans.
Bob went to live in a local home and because he was struggling a bit a couple of us guys decided we would stop daily to encourage him to eat his meals.  I chose breakfast and really enjoyed having coffee with him every morning.  It just started off my day right.  They had put a few tables together in the middle of the lunch room and made it the veteran table.  Even when Bob didn't really feel well, he always took the time to check with all on the table to make sure they were ok.  Once, I caught him with his hand under his head.  "Are you ok?", I asked.  He smiled and said, "Only way that I can hold it up".
He got shingles once and was unable to come down for a bit while he was contagious.  I would call and check up on him.  I could tell he was not feeling well one day and told him that I was sorry that he had to go through this.  He replied, "It might as well be me.  I have nothing better to do.".
And Bob continued to be the same giving Bob.  Most days, he welcomed whomever wanted to visit and was always so gracious.  He would give his visitor one of his coins and always listened and shared God's love in the way that Bob would.  He would give me a stash of his coins and asked me to give them to people that I ran across.  He said that you will know who to give them to. 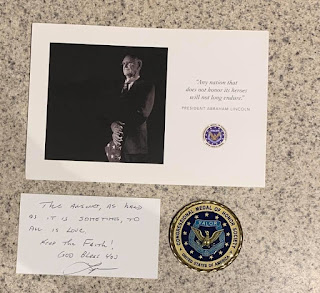 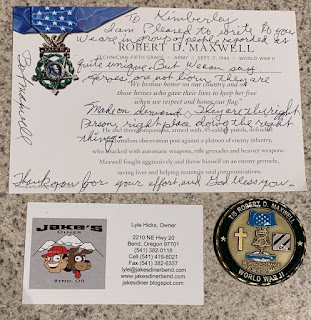 I met a lady from the other side of the country when I was trying to fix a problem with my cell phone.  Her name was Kimberly Munley.  I found that she was the person who stopped the shooter at Ft Hood so many years back.  I told her that you never know what hero you might be talking to and she asked me not to call her a hero.  But Bob did.  We sent her a message from Bob and one of his coins.  She cherishes it to this day.
I took my grandson to see him a few times.  He always enjoyed it and called the home, Bob's home.  He was a bit confused when my mother moved in.  "She lives in Bob's house?', he asked.
I took him in on a Thursday to see her and as we walked by his room, I could see he was praying with someone so we left him alone.  On the way back out, Bob's friend was gone and we stopped by.  Bob said that he wished that I could have met the man he was praying with.  He called him the best of the best.  I needed to know more about that since Bob was the best of the best to me.
I dropped my grandson off and went back.  "Tell me about the best of the best", I asked.  Bob shared that the man had been his pastor in Eugene at Santa Clara.  I asked if it was the Santa Clara Church of Christ and he said, 'yes".  I asked if he knew a Marion Glick there and he said, "Yes, she was a nice lady.".  Marion Glick was my grandmother and it was there that I came to know that he knew her.  That was our last conversation.

I left town the next day to go to Portland to an event and came back on Saturday.  On the way home, I was called and told that Bob had gone to hospice.  It was late when I arrived so I decided to go there first thing in the morning....but Bob passed away that evening.
When I heard I felt numb.  No more would I sit at his table.  No more would we talk over a cup of coffee.  No more smile.
On Sunday, I drove to the diner to help out.  I felt so empty as I drove I drove into the lot.  On the radio, there was a song playing called "Shangri-La".  I remember saying out loud, "That is where you are right now, my friend".  I looked down at the screen to see that the man playing the song was named....Robert Maxwell.  The tears started to flow as I grieved the loss of my old friend...and mentor.
I know that I will see him again one day.  But till then, I have my memories. 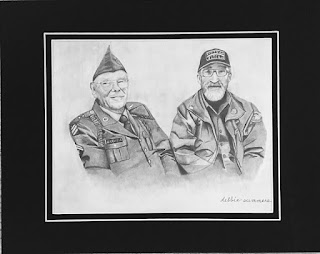 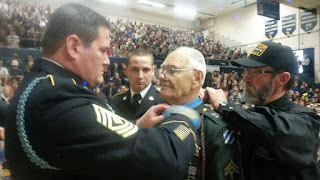 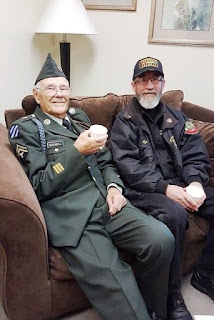 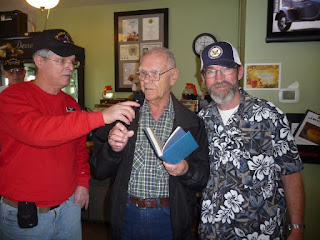 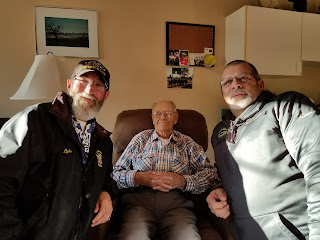 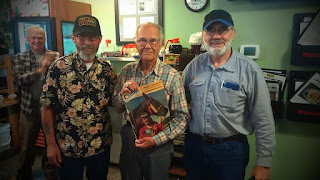 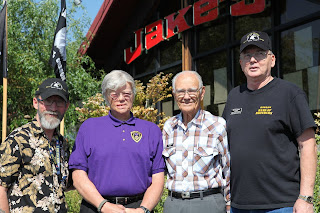 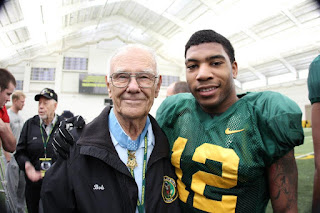 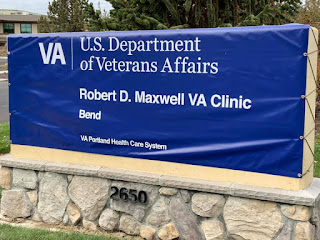