An old friend came to see me last week.  It reminded me of a story of my early days at Jake's  We discussed it and she asked me to write it down so here it is, Andy! 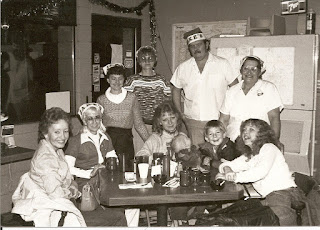 I began my management career at Jake's with the crew that was in place and pretty much doing what they wanted.  They were good, confident, and pretty much, unsupervised.  So, as I took the reins, there were, as you can imagine, some problems with the new guy who knew nothing about the restaurant game.  I had managed other things but not food.  So, I will admit there were was a large learning curve for me.

Two young women ran the floor.  Andy and Lynette.  They knew their customers and they knew their craft.  But, I was the new boy on the block who was now their boss.

I honestly don't remember the issue that came between us but both of them showed up at my office one morning because of it.  "We are giving you our two weeks notice.", they said.  I tried not to show it but my heart sank.  I knew very little and would have to hire and train new servers.  I tried hard not to show it when I said, "Ok, if that is what you want.".

I talked with Kim about it and told him that I wasn't sure how it was going to turn out.  "There are two types of race horses.", Kim told me.  "The very best are the thoroughbreds.  But they are much harder to manage.  These two are thoroughbreds." he stated.  "But, I can't just let them run the place.", I countered.  "No, you can't, but you also need to figure this out."

A week later, however, the problem began to resolve itself when Andy showed up at my door.  "Can I rescind my notice.", she asked.  With a sigh of relief, I said, "Sure".

An hour or so later, the problem was totally resolved when Lynnette walked in, with hands on her hips, and stated, "Ok, I give up.  You win!".

My first major problem at Jake's was resolved.  Lynette worked until we started the new and larger diner.  She said she knew that she would not be happy on a floor where she had to work with so many others.  Andy stayed on for many years and we have remained friends since.