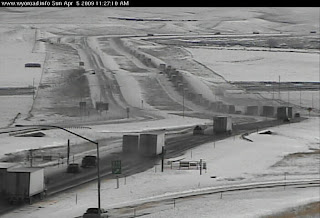 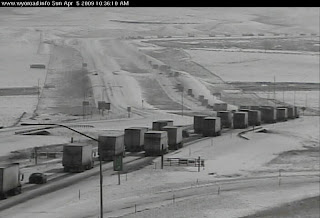 I was awoken early on Sunday by Casey who wanted me to see what the status on the Wyoming roads were. I checked the website only to see that the gates on the freeway were still closed tight. I suggested that he stay right where he was until I could see them open. No sense, sitting on the road in sub 10 degree temps in the rig waiting.

I got ready and went off to work. The girls were getting busy a little earlier and I jumped into the fray while keeping a side eye on the net and the gates.

Around nine, our time, I noticed that the gates were all of a sudden open and I called Casey to let him know that he could get on the road. A half hour later, I looked back at the web cams. One web cam showed the road going the other way towards him with lines of trucks as far as the eye could see. All of the truck traffic from the west coast had been built up since Friday night and was now heading east in mass. I called Casey to see if he was on the road and he said no. I suggested he hit the road as soon as possible fearing that he get caught up in something like that going the other way. An hour later, I checked the cams only to find that long line of trucks was still just that a long line of trucks as far as the eye could see for a whole hour!

The next few hours were spent busy in the diner and talking back and forth with Casey getting progress reports. On his call from Rock Springs, he informed me that they were going to try and make it all the way that day. I just asked him to be careful.

An old friend of mine, Jerry, stopped by to talk. Jerry used to do all of our stainless work in the old place before he retired. We have quite a few mutual friends in the business and he is considering writing a book on his experiences. I shared with him my blog showing him that we had yet one more thing in common. It was great talking with my old friend but the business of the day came first and I was soon called upon to help and Jerry left promising to return again in the future.

Frank stopped by to see if I would help him sing to an old friend, Ann, for her birthday that day. He had already written a song and we went out to the office to work on making it work. Judy joined us as we perfected his song written to the Marty Robbins song, El Paso. She then went in and ordered something for the both of us for lunch and Frank joined us as we finished off the song and then left with me promising to join him around five at his office for one last run at it after he had retyped the song.

Jayden gave me a call to let me know that he was bored. "Papa, could you come over and hang out with me this afternoon?", he asked. "Sure, I will.", I promised. I helped finish off the last rush of the day and called Carrie to let her know of my intentions. She told not to worry about coming over as her, Jay, and their neighbor, Carlos were out for a walk.

I drove home to take a short break and sat out back with Judy talking of what was soon to come with our new guests only hours away. I decided to go down to the hardware store to look for a garbage can for Casey to keep our fenced back yard clean from his dog, Hartford. I could not find what I wanted and realized that one of our old pickle buckets would work out just fine, so I drove to the diner just in time to help the crew finish with their clean up and close down. I busied myself with washing the windows in the back room as the girls were finishing off their last diners. I spied a couple that I had not seen in years and met them as they left out front. One of the greatest pleasures of running the diner is meeting up with old friends like that and this had been two times in one day so it kind of made it a red letter day. Casey coming home could only make it even better. We finished off the clean up and I went home just for a second to give Judy a kiss and I was off to Frank's office to prepare for our performance. We were to meet up with the party at Greg's Grill at Six.

Frank and I laughed as we put the finishing touches on the song and practised that along with a couple of others that I had put together in my head to work up to our finale. We were calling ourselves "Strictly Oldganic" (a spin off of Strictly Organic and a name we had come up with last fall on the golf course). Armed with our sunglasses and Mexican sombreros, we left for our engagement at Greg's.

We marched into the grill with our Hawaiian shirts and Mexican hats and began to turn eyes as we marched straight over to the waitstaff who must have been warned of our coming and shuffled us off to our waiting room. The room shrieked with laughter and Ann's surprise as we quickly broke into our act. We blew through our first two songs that introduced us and our intentions to a laughing and clapping crowd. We then prepared for our finish. Now the first two songs were in my head and Frank just followed along but the song that we had worked on was now typed out on a sheet that we held in front of us. My problem, that I now discovered was that my sunglasses are not bifocal. I must have looked a sight peering down at my words as I sang from underneath my dark glasses that sat on my nose. Finishing off the song which had snippets from her life, we received a rousing ovation and a hug and kiss from the birthday girl, Ann. Ann used to do our books at Jake's and her daughter, Kathy, who set this all up still does the same job for Frank. Kathy gave us both hugs also but the real treat was a hug from Ann's youngest granddaughter, Satori.

Our chore over, we laughed and joked with diners as we departed the restaurant. Frank told them that we would gladly work for tips but were not invited to stick around so we left and stopped by Carrie's house on the way back. Carrie was out on her BBQ cooking supper. We visited with Jay, Carlos, and Carrie's new dog, Lola who seemed somewhat happy to see us. Carrie was finishing off her supper and had cut a banana lengthwise and was BBQing it in it's skin. It looked quite interesting.

After dropping off Frank, I stopped by the China Doll for some supper. I dished out my food, cracked a beer and shortly after finishing dropped off for an hour or so on the couch attempting to watch a movie. Casey woke me up from Ontario. He wanted to know the distance and I brought it up on the computer. I agreed to leave the front door unlocked for him. A few minutes later, he called again to let me know that they were staying there instead and I helped him find a motel before finding my bed and some much needed sleep.
Posted by diner life at 3:17 AM

Do you ever stop, Lyle? You must spend 5 hours a day in your car - haha!

And a cell phone on my ear!

Such is my life. And other than being real tired right now, I love it all.