First off, I need to apologise to all of the people who read me for not posting in so long. You might take from that that I have not been up in the middle of the night but you would be wrong. The truth be know, I have been up and written many times but just have not felt that writers spark that takes an entry from being just informational to informative. Because of that I have written my blog entries only to delete them at the end of a long session of sitting in my 'man' room and listening to music as I am right now.

Allot of things have happened in the past few weeks and a couple of big events are in front of us also. I will try and capsulize those past events and touch on the ones coming up and am determined to just hit send at the end of this time of typing whether I like what was written or not.

Judy has taken on the role of entertainment director of sorts and has taken the crew on a few very fun adventures in the past weeks. With the change of weather, I see that coming to an end somewhat but I am sure that she will pull something out of that pretty sleeve of hers. 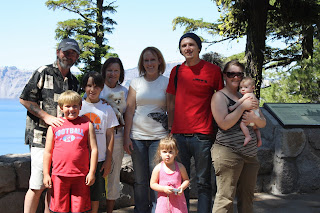 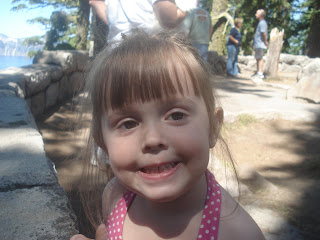 We took a group to Crater Lake and ended up with a young Chloe (Crystal's youngest) in our car. She entertained us during the trip with such dramatic statements as declaring that she had a wedgie to her informational statement that she knew where bees wax came from.....your ear. Chloe borrowed my camera during that adventure and Judy posted a collage of Chloe pictures that she took from her short perspective. 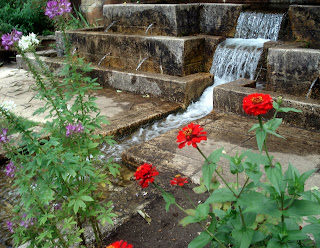 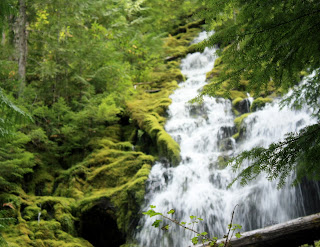 A week later, we took the biggest group of the year to Belknap springs on the McKenzie river and then stopping at Proxy falls on the way home. The secret garden at Belknap was a highlight of the trip as the group walked amongst its beauty of water and flowers. We found a small eating area in the corner of the group of gardens where we all had lunch before we walked back to the car and drove to the proxy falls trail head. We all walked into proxy and sat at the bottom looking at the splendor of it all while a couple of our younger crew members climbed to the top of the beautiful falls. 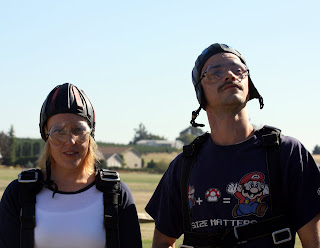 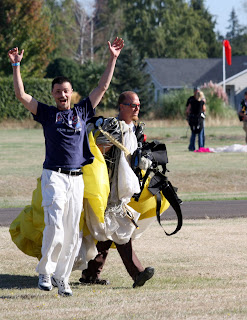 Judy's last adventure was one that I did not join in on as I had promised my grandson Jay that I would be at his soccer game and I stayed home to watch his team play. Judy took a van load of people over to Mollola so that two of our cooks could attempt something that many of us would love to do and yet probably would never attempt. The went up in and airplane and .....jumped out. Ted and Crystal went through the class needed and then boarded the plane. It was Crystal's first plane ride. No one faulted her when she did not jump. Just getting into that plane and lifting off of the ground was a new and exciting adventure for her. Ted screamed with glee as he drifted down towards the ground and then had his attached instructor behind him pull open the shoot. He said afterwards that it was intense and that he would probably not try it again. He is now planning his next jump while Crystal and Judy even toy with the idea of dropping out of the sky themselves.

As I wrote earlier, Jay is in soccer and I love watching his team play. Many of the team have been playing together for a few years now and are used to playing with each other. There skills have been honed along with that and they are somewhat unstoppable. I kind of wish I would have sponsored that team but I gave Jay the choice of only one sponsorship and he chose the Jake's Diner Chargers. The Chargers played the Prineville Cowboys to a 6 to 6 tie last Sunday. The Cowboys always field a pretty good team and this one was no different with some pretty big boys on it. I was pretty impressed with our team especially our defensive line that is anchored by Jay and a name that Bend will certainly hear of a lot in the future in Bend sports, David Prickett. David is a relentless hard worker who will not stop giving 100% until the other team has been stopped in that particular play. I watched David run a man down from the other side of the field. At the end of the first half, the Cowboys were only a foot away from the end zone with fourth down. I turned to a parent next to me and said, 'if they try coming down the middle, they will not be able to make it.'. Their linemen stood tall over ours but our foursome plus the linebackers behind them would have nothing of it. Their line surge was met by ours who drove them back a few yards. Jay, Dave, and the rest not only held their ground but drove those bigger boys back. That one play made my day.

On Sept 20, Judy and I along with Jim and his wife drove down to Sunriver to the Oregon Restaurant Association's award ceremony where we were given the Restaurant Neighbor Award. We are very proud of this award which was given to us for our community support. I was the first person to speak at the ceremony and wanted to insure that I gave credit to Jim and to Judy who is such a good business partner (along with being a pretty one also). I found it funny that all of the other recipients that spoke after me also gave credit to their wives. I am not saying it was because I did mine but I guess I would like to feel that way. It felt weird standing up on that stage with my Hawaiian shirt and ball cap and looking out over a sea of suits but I was determined to just be me.

Now that pretty much brings us up to date on our past. And now for the up and coming events.

On Monday and Tuesday, we will be hosting our third annual World Series of Holdem for Habitat. Two years ago, Habitat came to me with the need to raise a larger amount for a particular project so since the World Series of Poker was going on the TV, I set up this special event that our weekly events now work towards each year. Tuesday night is the big night. All of the winners of our weekly tourneys are automatically qualified along with the top five in points. We give points for every place on the final table each week. We have added one more automatic berth this year and that is what we called the 49er rule. If someone came and supported most all of the year, they deserve that berth also. The last chance to qualify is Monday when we run our final prequalify event. Every table is a final table with the highest non-qualifier on that table now qualifying. The funny thing there is that in both of our last two years main event, some of the highest positions have come from that group. I will be there on Tuesday night with my pink frog ready to win that trip to the coast. This year, we have quite a few neat prizes for all of the final table including a helicopter flight over Bend, golf from Missing Links in Redmond, Hair products from Kings Razor, gas from the Chevron station in front of us, and bowling from Lava Lanes.

Next Friday we have agreed to work with the Family Access Networks walk up the butte for FAN. We will be giving our profits from any of the after walk breakfasts from any of the walkers. We jumped on at the end of this one but I see it as an event that seems to be right up our alley and have somewhat verbally committed to partnering in the future with this very important group in our community.

A week later, on a Sunday evening we will be hosting a Spaghetti feed for the American Legion. The American Legion president, Richard Smith has been a tireless helper in every event that Jake's has ever held. He has told me never to ask him if he wants to help but to merely assign him a spot. On Thanksgiving, Richard sits for hours with pies all around him dishing up those delicious deserts to happy seniors. I am hosting this event as much for him as for the organization that he heads.

So...there you have it. We are now officially up to date. Once again,I apologize for my lack of posting in the past few weeks and will attempt to be diligent in the future
Posted by diner life at 3:33 AM

Thanks for the info on Proxy Falls, we were just at Belnap over Labor Day. Wish I would have known then... now we have another excuse to go up there :D
Also I was wondering if you have more info on the butte walk for FAN.
Thanks for your commitment to the community.