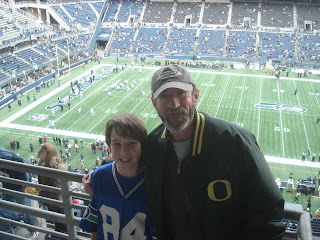 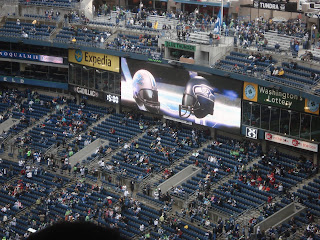 Casey's favorite team is the Detroit Lions. It has been since his youth and he has stuck with them. So, when he found that they were going to be playing in Seattle this year, we set up plans and bought tickets. I thought it through knowing the weather up there and made sure that our seats were on the bay side of the stadium so that any weather would be behind us and we secured seats up top on that side of the arena. We bought four so that Jayden and Casey's girlfriend, Jessica could go.

Saturday afternoon went by slow for two reasons, we had to wait for Jess to get off of work and the Ducks were losing down in San Fran but finally we hit the road around 5 or so. We made fairly good time and I watched the speed signs closely between zig zag and sandy as they fluctuate a bit there. I usually set my cruise on five miles above the limit, knowing that no police will stop for that. Coming into Sandy, I didn't notice the signs but slowed down knowing that the Sandy 25 was just around the corner. As I entered Sandy at my speed of 25 or so, I noticed the lights in my rear view mirror. I slowed and looked for a wide stretch to pull off at (for officer courtesy) and the policeman got angered at me, hitting his siren for effect. He informed me that I was driving 57 in a 40. I asked where and he told me of how there were two signs one informing of the other up and coming 40 mph and when I hit the 40 sign, I was going 57 (obviously decelerating from my 60, but oh well). I said something as he handed me the $170 ticket and he coldly informed me that he could double the price as it was in a safety zone. I thanked the kind sir and we got on our way.

We stopped at our friends house in Vancouver where Trin stays when working in Portland. Randy and Anisha Slocum are some of the most giving people that I know and since their kids were gone for the weekend, they too went out for the night leaving the house to us. If we had not shown up, Trin would have been home alone. We all situated ourselves for the night and I dropped off to sleep around 10. I heard a siren but thought it might have been a dream or something and lay there in my bed. Trin banged on the door and came inside looking out the back window overlooking the yard behind. I could then see the emergency lights and saw many of the locals mingling around a SUV that had been driven into the fence of the neighbors. A police car sitting next to it seemed to have forced it there.

I put on my clothes and went out to see what was up. As I approached the scene, an Asian lady was smoking a cigarette and walking my way so I asked her what was up. "A guy just jumped out of this car and ran down the road. I think the police have him.". Other police cars showed up and one large police officer walked up to us, grabbed the woman throwing down her cigarette and spinning her around to slap on the cuffs. She had been in the vehicle! I threw my arms up and backed away finding another neighbor to talk with. In all, around 9 police cars showed up. I was so happy that I was there because I know Trin well and she would have panicked over the situation leaving me helpless to help her out so far away.

The excitement over for the night, I got back to sleep and we headed out early the next morning. We arrived in Seattle around noon, just in time for the 1PM kick off. We mingled in the crowd outside the stadium eating dogs from the local stands in the street as a part of the whole football package.

We arrived in our seats about a half hour before the kick off. Although they were high up, we had a fantastic view of the whole field from the 50 yd line. 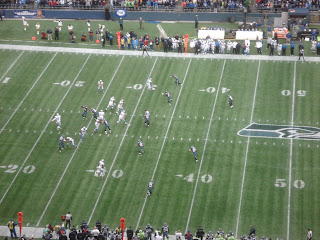 Others began moving in around us and a family of four came in two rows down. They were very colorful and informed everybody around them that they had come in from Iowa to see the game. The funny thing was their dress. The mother (who reminded me of Edith Bunker from All in the Family) was dressed normally, her husband was all decked out in Minnesota Viking gear, the son in Miami Dolphin gear, and his wife/girlfriend the only one in a gear of one of the teams as she sported Detroit Lions gear including an autographed Joey Harrington jersey (that should be worth a bit).

Edith began excitedly taking pictures of their game event. She had that big Edith smile on her face as she snapped the shots. But when the game started and the crowd roared around her, she turned sideways and held her hands over her ears not looking at the field at all. After that initial excitement, she sat down and preceded to put all of her stuff on the seat next to her. The problem was that seat was soon occupied. She seemed frazzled bringing all of her stuff back to her small space. Putting her coat on, taking it off, putting it on again and finally placing it on the seat behind her. She sat back down and seconds later threw her hands up in the air. She had lost something. She looked in a panic around her and then made the fellow who had taken the seat away from her stand up so she could look around him. She finally found it behind her on her seat. By the end of the first quarter, her seat was vacated and I spied her sitting in the isle way. She could not handle the closeness of us all, I guess. Her husband joined her at the end of the third quarter or so. 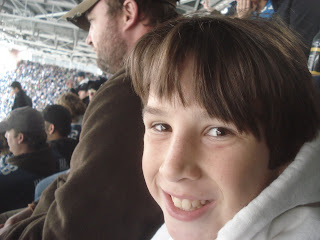 Behind me a crowd of 9 or 10 Canadians showed up. Mostly guys, there was one young girl in the bunch. They were all drinking beer and arguing over which Hockey team was better, Calgary or Edmonton. Through most of the game, they talked beer and hockey (ehh). Their heavy Canadian accents highlighted the yelling back and forth. The funniest remark that I heard was somewhere in the second half. "Hey, this is great. We should do this more often. Anyone know which team is winning?".

As they drank, the language got more and more loose. The "F" word started to get thrown around and by half time was a steady flow. I had had enough and I stood up, turned around, looking at all of them in the eye in my best Grandpa stern look and while pointing down at Jay, said, 'Do you think you could stop the swearing please.". They were all very apologetic and I heard many "sorry sir's". I thanked them and sat back down. During the second half, I heard them policing themselves. As one would slip up, the other would hit him and I am sure point back down at Jay. I got to rather like those guys who seemed clueless as to who was even playing the game down on the field.

After the game finished, we fought the crowds going out and got in our car, deciding to drive straight home as it was only 4:30. We made only one big stop in Portland for gas and supplies and arrived in Bend around 10:30 - 11.

As I drove down the freeway in Washington, I would fly past cars and then realize that the 70mph had been reduced to 60mph only to have those same cars fly by me minutes later when the 60 became 70 again. I do need to keep a closer eye on those types of signs, don't I?
Posted by diner life at 7:01 AM