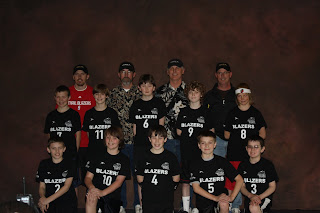 I have been sponsoring a couple of Jay's sports teams a year. I think it is a worthy marketing investment for any business for it accomplishes a few things. Your name is out there permanently on small shirts that are used for many years in some cases. I have seen young kids wearing shirts that were from teams that I have sponsored last year. You are supporting worthy parks and rec programs that help build strong minds and bodies. But, the most important aspect is that it gives you a connection with the kids and in my case, an additional way to connect with my grandson, who I am so incredibly proud of in so many ways.

I remember his eyes lighting up when I asked him if he would like me to coach one of his teams. I told him that it all counted on whether or not I could talk my friend (and his friend), Frank into helping out. I have watched Frank coach young basketball teams that his kids were on and knew that if I could talk him into it, that the kids would get so much out of the experience along with Frank. Frank agreed and we signed ourselves up to co-coach the Jake's Diner Blazers.

Jay was already on the Bend High developmental team and we soon received a list of boys that included 6 others on it. I remember looking down at that list and wondering how we could make it work. After all, on any given week, someone would either be sick or away and how could we play a full game, let alone just foot a team to play. I talked to one of the coaches of the Bend team who I had made friends with in football and we soon had two of the COBA kids on our team. A third boy showed up at our first practice and we had ourselves a complete team.

I was in awe of Frank's ability to coach and relate to these boys and realized early on that my ability to coach was extremely limited. First off, I love the game but never was able to play it well enough as a youth to make a team. It was a sport that one of my brothers excelled in but as the last of three young boys, I paled in their shadow so I stuck with my what I could do best which was running. I knew I could assist, however, having doing so with my daughters team a few years back where I learned that my spot on the end of the bench could affect young minds in many ways. While the head coach worked on their skills, I worked on their emotions and focus.

The following weeks, I entered the lives of ten boys in an experience that I will remember the rest of my life and a connection that I hope will last long into the future.

Yesterday was our last game. The team had members that many of our boys knew well including the son of the Bend High team and was coached by their head coach. We picked up a couple of other coaches ourselves along the way including Bend's co-coach and one of the our boy's dad, who I have known for a few years. Jay had asked me if I would coach one of the games so I decided that it would have to be this one.

I felt very inadequate compared to the other three men but knew that with their assistance, I could pull it off. I sat up last night working out a plan to include all of the boys in equal time as it was their last game and since the goal of this program is for them to play not necessarily win. But, especially this game, these boys wanted to win.

My plan and blend of boys seem to work well at first and we traded baskets back and forth with the Sixers. Our boys seemed to have added spark in them and played far and above their best game in many cases. It is an powerful feeling squatting down in the middle of a huddle of young boys and to have them actually listen to you as you speak. That feel is actually indescribable. 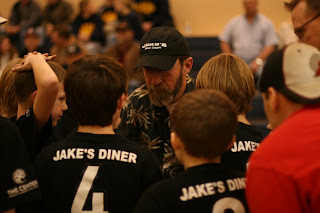 Now, there is no keeping score officially in these games but you know the parents have that one and our group of parents were an especially vocal group totally wrapped in the excitement of the game. The din that I heard behind me was as loud as any high school game that I remember.

After halftime, I set my only play. We had two plays that we worked on in practice that I had our two point guards shuffle at their own decision but I had a variation of one of them that was sticking in my mind. It was a play that Jay had cooked up in his ever thinking mind and had named "peanut" some reason or other. With the point guard bringing the ball down the floor, the four other boys would set themselves up straight across the front of the key. The guard would pass to one of the two outer boys and then use one of the inner boys as a block to cut towards the basket and hopefully catch a pass back from that same boy. I wondered if the guard ran in between the two boys in the middle if that would make him even more open from blocks on both of his sides. I quickly wrote up the play on my clipboard that Jay had given to me as a Christmas present and sent the boys back out on the floor.

As things would go in the case of young minds, their was a little confusion on the floor and the pass ended up going to one of the inner boys but the rest of the play worked to perfection and the return pass to the cutting guard found him open under the basket for an easy two points. We then went on a roll of baskets that put us safely out in front.

It became evident in the second half that the team was having fun when Jake, Coach Sam's son started playing a one on one dance with the coaches son from the other team. A glint in Jake's eye and a huge smile lent to a determined crouch and dribble from one hand to the other while the other boy positioned himself to try and stop Jake and the rest of the kids sort of cleared out to let them have their fun. The crowd loved the entertainment.

In the middle of the fourth quarter, the other team caught fire and scored a couple of baskets. Frank leaned over and said, "Good time for a time out". I looked at the clock and thought to myself that a whole new team was soon to hit the floor and ignored his request. Soon a couple more baskets put the other team in the lead. Our new team hit the floor and I hoped that it would be the change and was soon to see that it was. We scored two quick baskets including a very sweet tear drop from a driving Jay who cut right through them middle of the defense and prompted a quick time out from the other coach. 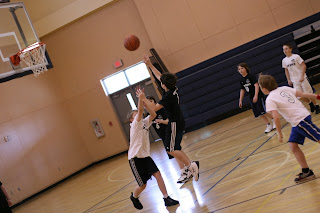 From there, the intensity seemed to blossom with the screams of a extremely excited parents and grandparents behind me, I all of a sudden hit a wall of sorts of realizing that I was very far out of my league. I leaned over to Frank and said, "I really don't know what to do here. If we need a time out, you talk". With two minutes left, the rest of our boys pleaded with me to put our best boys out on the floor. I looked out at how hard the ones on the floor were playing and just could not do it. As much as I wanted to win the game, the boys that were out there were giving it their all and it just didn't seem fair to take the time away from two of them just to try and win. It hit me that this was what it was all about....not winning but letting the boys feel the experience.

The other coach called a time out and I stared at a group of panting and hard working boys who were staring at me waiting for word on what they should do.....and I had nothing to say as I was in awe of them. They were playing their hearts out and I was overwhelmed by the whole thing. The few seconds of uncomfortable silence were broken with Frank encouraging them on and his voice broke my silence and I yelled out as the group threw their hands in the middle, "Just go out there and have fun!". 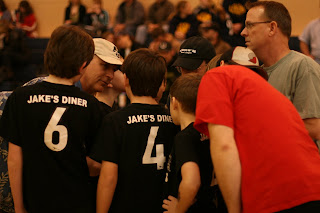 With seconds on the clock, one of our boys was driving to the basket and had his arm whacked hard right in front of our bench and more importantly, in front of the screaming parents. The ball flew out of bounds and the refs who had not seen it, sent it down the other way with the other team. The parents screamed with the insurrection and I admit that I too yelled out, "Foul!" with my now very hoarse voice. I raised a hand to try and settle down the angry mob behind me. The game soon finished with what I was told was a draw. We had tied the other team.

My coaching debut finished, I bagged up the balls and headed down quickly to the diner to insure that the food was ready for the final party for the team.

The whole experience has left me with a feel and permanent memory that I am sure I will experience over and over in my brain for the rest of my life. I know that I will always have stories of how I once coached my grandson's team. I wonder, however, how much those stories will change or become embellished along the way. All I know is that they will be there and this will be ranked up there with one of the most impacting experiences of my life.
Posted by diner life at 4:26 AM