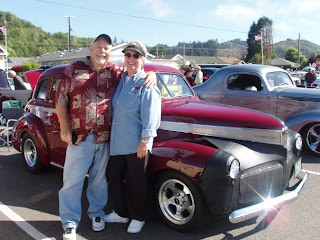 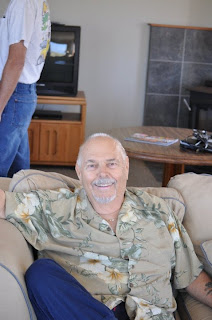 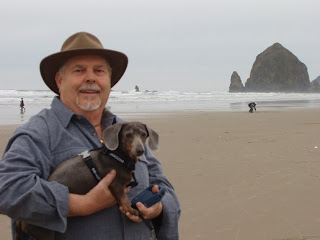 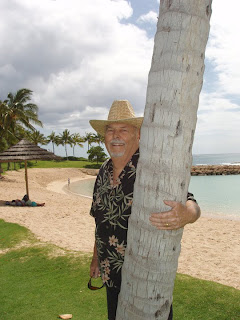 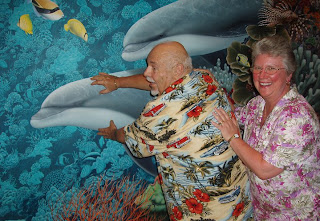 The first year that I was open in the new building, I was approached at Safeway by a man who introduced himself as Mike Schmidt. Mike was then the Chamber President. Mike said, "I love your restaurant.". This was the start of a good friendship. While I could write a story about Mike easily since he has left an imprint on me, he is lead in into this one as he brought into my life yet another person who I was to come to call friend, Louis Najera.
Mike's wife, Diane, once described him best. She said he was a lovable curmudgeon. I didn't know the name but after looking it up could see how this oxymoron could fit him like a glove. A curmudgeon is a crusty ill tempered old man. An example would be the person who said to you, "What? I can't hear you!". Then when you raised your voice would say, "You don't have to yell!". While that was the persona that he carried outside, inside beat a kind and caring heart. As long as your weren't stupid or something.
I remember him chiding me about my Hawaiian shirts. "I bet you they are not genuine Hawaiian!", he would comment. We would often share tags to prove our authenticity. While I knew it was a joke, it did lead to me checking the tags more when I purchased my shirts at Goodwill which further lead to me buying more authentic Hawaiian so that I could chide him with, "you want to check my tag?". Gayle would laugh and say, "Please, don't egg him on!".
Lou and Gayle along with Mike and Diane became weekly customers who I loved to come back and talk to when they arrived in the diner.
I purchased a small Halloween butler with a bald head and a scowl on his face to decorate the front and to have fun with in various events. Lou came in one day and placed his hat on the butlers head. "Thanks for the new hat rack.", Lou chided. I smiled as the butler had reminded me of him so much and so the new ornament for Jake's became lovingly called "Lou". While the real Lou would grumble that he didn't look anything like him, I knew that he enjoyed the sentiment behind it.
The name stuck and my crew began calling the butler, Lou and referring him that way to our customers. So much so that in 2009, when I placed him in the back of my Model A in the Christmas parade, I heard one small voice in the crowd yell out, "Look, there is Lou hanging out the back!".
Mike and Diane moved to California and I didn't see Lou as often as before but I always enjoyed his banter and would come out whenever I knew he was at the diner. I even drove back in a time or two when I was called to inform me that he was there.
I knew that Lou was getting sick before I was told so. And soon, I was told that he was in the hospital. I went in to see him only to find him chiding the nurses as he did all others in his life. They saw through him also and joined in on his banter. I don't know if it was his idea or one of the nurses but he wore two gowns. One to cover the front and one to block the gap in the back. I laughed when he showed it to me with a grin. It was the perfect solution.
In one of his more serious times, Lou thanked me for visiting him in the hospital. I could tell that it meant allot to him. We actually doubled up on the nurse that morning and Gayle joked that maybe I should leave so the nurse could get some relief and get on with her day.
Lou loved old cars and had a beautiful old Maroon Studebaker that he had restored. He would often bring it in when he came in to dine with the Linechasers (a local auto club that he and Gayle belonged to).
When he learned of my cancer we had one of our more serious talks and although he never said the actual cancer that he had.....the name was not important. Lou was relating to me that he knew the fear that I had inside of me stemming from the word itself. I don't remember the words but left that conversation knowing that I was his friend and that he cared.
The last time that I saw Lou, he had oxygen and had not been able to eat well. He said they were coming in to have some 'real' food and hoped that my cooks would be good enough to make his that way. While the banter was normal, I could tell that he did not feel that well and I worried about how much longer that I might know him.
I was contacted last evening by Mike and Diane that he had passed on. His service will be next Thursday at New Hope Church. Nothing will keep me from that service so that I can more officially say good bye to my friend, Lou. And, BTW, I will be wearing one of my authentic Hawaiian shirts......just check the tag!
Posted by diner life at 2:15 AM

Great BLOG and sounds like a GREAT FRIEND Lyle! You are blessed!

I am truly sorry. He sounds like a lot of fun. My thoughts with you and Diane.

I just want to add that you have written a few of these posts this past year and although I know they are hard you are very poignant in describing your friends. I always walk away feeling as tho' I knew them and a bit sad that I didn't.

Lyle, Enjoyed reading this. You have a talent for writing among many other abilities. Thanks and may God continue to bless you with good friends and restored health., Sharon M.

Our customere base at Jake's is more elderly so that will bring me to more of this. I count my blessings for every one that touches my life like Lou.

Wow Lyle...you ROCK. Nice photos,good memories - he will be missed.

Thanks Lyle - Lou really loved you and everyone at Jake's. He was a special guy, once you got to know him! He will be missed greatly by friends, family and Mocha. :)

Thanks Gayle. I loved the picture of him and Mocha at the beach. Just had to put it with this.