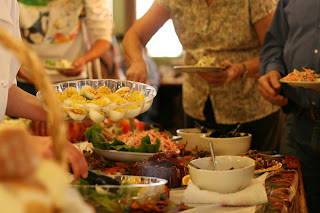 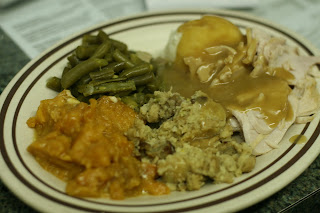 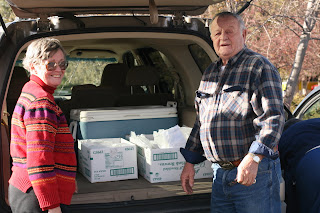 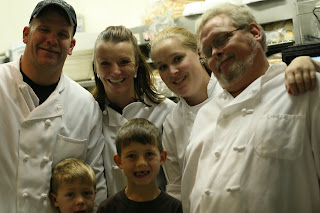 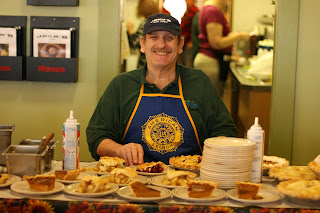 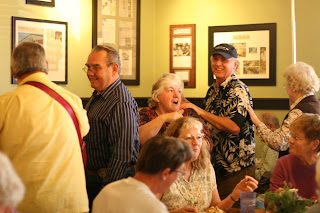 The T stands for Thanksgiving.....or Turkey. Which ever way you call it, it is by far our largest outreach event of the year.

It all started with a conversation with Jimmy, our kitchen manager. He had done a similar type of event in his restaurant in California. He saw a need and wanted to help fill it. The need was seniors who no longer had their family around them and were now alone on this special family holiday.

He did an 'at cost' meal and ran his restaurant for the day with just his family. His family members would also deliver to ones who could not get out. I loved one of his stories of delivering to a man and then watching a bit of football with him as the man enjoyed his meal.

I decided that we would attempt to do the same thing up here the first year that we were open in our new building. That was 2005 and the event was pretty successful with around 300 or so attending.


Every year, the event seem to grow more as more seniors found out about it. Last year, we served over 450. The problem was that was just too many. We had traffic jams in between hours when seniors waited for open chairs while other seniors did not want to give them up because they were having too much fun.

The day, while productive, was exhausting. As usual, I sat at my desk the next day and wrote out things to try and make the next year less stressful and yet still handle the need. I had just wrote down the words, 'reduce the numbers', when I looked up at my computer screen and saw an email from the Central Oregon Council on Aging (COCOA). The director was asking if I would be interested in working together with her on an event in the future.

A light went off in my head as I typed my response. I told her, "Sure, what about next Thanksgiving.". With only a few back and forth messages, we had laid the foundation for this years event. She was fairly sure that she could get the Bend Senior Center for the day as it was usually closed that day and she had volunteered her delivery unit (Meals on Wheels) to make our deliveries better (Last year, I had three different delivery tandems going out with their personal vehicles and delivering out of the back of pick up trucks.).

Through the year, we conversed back and forth a few times and in September, we helped them out with a Veteran event set at 9-11 and held at the Elks lodge. From there, we began to focus on this up and coming event. We had already received an OK from Bend Senior Center but now they had also agreed to jump on board with the event and be Co-Partners with us.

We had already been receiving phone calls back in September from excited seniors who wanted to get their names on the reservation list. So, early in October, we started putting together the final polishes on our evolved event. We decided to attempt to turn the center into a sort of 'mini' resort for the day. The main floor would house the meal with sittings for 160 and reservations for 80 per hour. That way, if seniors wanted to linger a little, we could still easily set others coming in.

We also decided to change the serving to a buffet style. The hors d'oeuvre table had already been that way but now, we would do the main line in the same way. I began calling the entertainers from years past and asking them if they were interested in coming back. Jimmy looked over the kitchen and began his preparations. Everything just seemed to fall into place.

COCOA and us combined our volunteers and began to put them into their prospective places and last minute preparations were made. Jerry Bugge, the husband of Mary (one of our waitresses) loaned us his enclosed trailer so Jimmy could began loading it with stuff days before the event that we would be needed for the service. One extra entertainer, (Steve Neff, a singer songwriter whose family had lived in Gilchrist when I was growing up) made one more than we needed for the main floor but agreed to come into the entry way and entertain there.

So, it will look something like this: The entry way will be filled with couches and chairs with coffee and cakes for seniors to sit around and be 'family' for one another during the day. They are free to stay as long as they wish. A cashier will be present there and collect the money for the meal stamping the hands that will go into the main floor at there prescribed times. A TV will be in the pool room that has two pool tables. I call that the 'man' room where seniors can either watch the football games or take turns playing pool. Coffee and snacks will be available there also.

The main floor will have an entertainment stage where some bands will play while other entertainers will opt to just walk amongst the crowd. A table for salads and hors d'oeurves will be on one side while a buffet line serving turkey, ham, and all the trimmings will be on the other side. Yet another station will have drinks while a forth will house desert featuring our buddy, Richard Smith who each year cuts and serves the pie and ice cream.

And, I am happy to say that Frank will be there. Frank Patka has become an 'asked for' part of the event. I have had seniors who called in for reservations ask me, "Will Frank be there?". He has become well known for forming conga lines through the main floor or catching olives that were juggled from another volunteer (a feat captured by the television station a couple years back). Frank thought he might be out of town but his business has kept him close by and has agreed to join us.

Sysco foods, Food Services of America, Eberhard Dairy, Franz Bakery, Farmers Coffee, and Childers Meats have all agreed to help us out allowing us to lower the price from previous years to an easier $7.50 per person and others have donated money to pay for seniors who can not afford that. All tips and left over donations will be given to COCOA and thus rounding out the event to make it an event for seniors that will end up benefiting them in other ways also.

I know there will be glitches....there always are but this years event just feels so right. As if it were meant to be. Maybe it is.
Posted by diner life at 4:28 AM

I bet you are going to be surprised at how great this is going to be. Besides I don't think anyone minds the little glitches - it is simply a day to give thanks and enjoy friends and family.