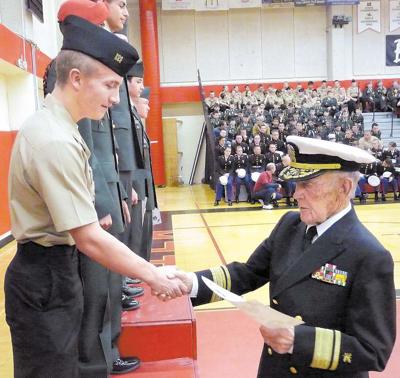 I remember seeing him the first time.  He was not very big in stature but there was something about his presence that caught your attention.  He just seemed....confident.

We averaged around 100 men and women every week in our meetings.  While most were enlisted, we had our officers.  But, he was our first Admiral.  Admiral John C. Shepard.  And, he just wanted to be one of the guys.

I don't know how many times he had been there but after one of the meetings was over, he approached and introduced himself to me.  I do realize that his title held quite a bit to me but there was something about him that words cannot describe that held my attention even more.

After he had introduced himself, he stuck out his hand to shake.  "You are doing a good job here.", he said, "Keep it up.".  My head dropped a bit as I tried to grasp the minute.  A steel grip brought me to the present.  I looked into eyes that grabbed and captured you.  "Did you hear what I said?", he asked.  "Yes sir.", I answered.  He smiled, turned and left the meeting.

He was not there that many times before we lost him.  His service was set for the Catholic church.  In his short time with us, he was greatly admired (no pun intended) and many showed up.

I made sure that my dress was ship shape that day.  I got my hair cut, made sure my ribbons were straight, and my shoes were shined.  It reminded me of getting ready for inspection back when I was in.

As a Navy man myself, I was asked to be one of his pallbearers.  Another first in my life and a great honor of it's own.  And, if I do say so, we looked pretty good for a bunch of old sailors as we attempted to keep in step, rolling his casket up the isle.

After the service, we formed again and wheeled him outside.  When we got to the hearse, we lifted him up and rolled him in the back.

At that moment, I felt a steel grip on my right hand and heard the words, "You are doing a good job here.  Keep it up.".

Tears streamed down my cheeks as I watched his last ship depart.

This all happened ten years back but it seems just like yesterday and its memory seems to be burned in my conscience.  One that I will cherish the rest of my life and become one of my life's many stories.