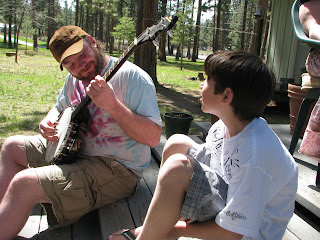 The one person that has left the most in my life is my son, Casey. The free spirit in my family, he has moved to more places and returned than either of the two daughters. Now, he along with his girlfriend, Jessica, are bound for Alaska for the summer.

Shortly out of high school, Casey had a desire to go somewhere and experience some place different. We helped him get a job in Cannon Beach and drove over with him to see him get started. I still recall leaving him there standing next to his car as he watched us drive away. Judy looked out the back window grasping for that last look at him as the tears streamed down her face. We all openly sobbed for miles as we drove the road towards Portland. An emptiness seemed to envelope our lives that lasted for days. This was different than just seeing him off to camp.

Towards the end of the year, Casey returned and lived in Bend for a short time before announcing that he was going to join the Navy. That separation seemed to be the hardest for me. Maybe because that was when I really cut the strings of home when I joined. I struggled the morning of his leaving to find something to occupy my mind. I ended up watching the movie, Rudy. I thought I was doing quite well until the part of the movie where the fans are all cheering for Rudy and Rudy's dad stands and joins in with the chant. Unaware of just how much it was affecting me, I actually heard the sob and felt the water dripping off of my chin before I realized that I was sitting there, crying like a baby. When Casey was ready to leave, I walked him out to his car and watched it drive down the road. Standing there in the middle of the road, I watched to see that last glimpse just as Judy had done when we had left him on the coast. With knees shaking, I struggled to find a place on my property where no one would see me in my grief. Finding the spot, I dropped on my knees and fell into a fetal position as my body wretched in open sobs of grief. I wondered if I would ever see my son again.

Then, before I knew it, he had returned home again. And we had his presence for a while longer. Then, it was off to Wyoming. He spent a winter there in one resort and then a summer in another. Judy and I attempted to stay in close contact and relished the various conversations. When Judy would answer the phone and hear that distinctive, "Hey", her eyes would always light up.

Casey stayed this last time for a couple of years. He worked with us at the diner and eventually began to serve as our first male server. Our customers and fellow employees came to know him and he was respected and loved by just about all. His kindness and great personality overcame his sometimes somewhat shabby appearance as he let his hair and beard grow.

Judy and I took him and Jessica up to Portland yesterday. We drove to his favorite haunt up there, the Edgefield in Troutdale. For anyone who has not seen it, I highly recommend for you to check it out. There is so much there to see with the buildings, grounds, and gardens.

Leaving him at Trinity's apartment, I watched Judy searching for that last look again as we drove off. It was easier this time but will never be easy. We know we will see him again in a couple of months. By the time we reached Mt Hood the tears and red eyes had cleared but the drive back was pretty much in silence as I believe we were both going over memories in our minds of a skinny little boy with big ears who had grown up in front of our eyes to a broad shouldered good strong man. We struggled to fill the emptiness left by his leaving with those memories.

And so, my sleep tonight is interrupted with thoughts of him still. So much so that I needed to write some of them down so that I could get back to much needed sleep. Casey, if you read this, I know that there are things in this life that we may never agree upon but know this. I am extremely proud of the man that you have become. A man who is strong and can be counted on. One who respects and is respected. A man of character, strength, and kindness. Traits that any man would desire to see in his son. I love you dearly, buddy, and look forward to the next time that I will once again see you face to face.

Thank you for sharing your tender moments, Lyle. I remember leaving home, and my dad crying as I got on the train bound for the west. I didn't realize what that meant to him, me leaving. Here I was so excited for my adventure, and my dad was openly crying, which I had never seen before.

Now that my own son is away at college, I feel all of that, too. I love when he comes home and I ache when he leaves.

You made me cry, and I don't even know Casey.

Thanks Girls. A guy who says he doesnt cry....lies.

And Kina, I ran across a bag in my cooler that said "For Whitey" on the outside with a cinnamon roll in it. Poor guy!

Hi, This is Jayden. I think I am the only one who didn't ball. But, I still loved it. It was great!

You will when you get older, Jayden!