Crystal, Duke, and other things

Imagine growing up in the Pacific Northwest and never seeing the ocean. Imagine how you would react to such majesty and splendor. Myself, I can not remember the first time that I saw it. I only know that each and every time I see it now, I am at awe of its Beauty and Power. It is not just the visual but the sound and smell. You must experience it to know what I mean.

Crystal, one of our cooks, had grown up here and never experienced that. So, Judy and I decided it was time to see if we could help. Judy, Trinity, Andrea (one of our wait staff), and Crystal took a day trip on Thursday and showed Crystal one of Judy and my favorite places. I wish I could have seen her face when she first layed eyes on it but could only listen to Judy's stories of Crystals reactions. They say that a picture says a thousand words and I think this one says that Crystal had a good time. 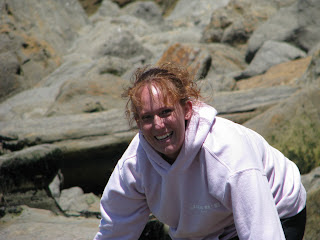 I think she is already planning her trip back.

I don't know if any of you saw the story on the man who was hit by a truck crossing the street by Costco. That man, Duke, was riding over to the Forum after leaving Jake's. He rides all over picking up cans where ever he can. I have really come to enjoy his presence and his smile. "Hiya Jake!", he would yell out as he rode by. I even set up a special place behind the building that only he and I knew of to put my cans so that no one else would take them. I always wanted to get to know him better but I just didn't. I didn't even know that he was married. I am hoping that he makes it through every thing OK and that I get the chance to get to know him better. I am praying for you, Duke.

I put out a PSA on the fourth of July BBQ last Monday. Only the Bulletin called me back but it never made it to the Friday GO magazine where some people get their info on places to go and see. I guess I am wondering out loud if one can do to much and then since it is already been news in the past, some media don't see the point in getting the word out. If the media does not pick it up, I wonder just how well it will go. This is the fourth year that we have had the event. The first year was a bust while the second a great success thanks to the various media that picked it up. Last year, it coincided with our Wednesday night cruise in and that alone helped with its success. This year, it is on a Friday and i guess it will all depend on two things. Whether I can get the word out and just how many other events will be going on that evening.

This was the first give back to the community event that I set up after the move to the east side. My reasons were numerous. I wanted to give back to the community that kept me alive, I am a vet and wanted to help out other vets, but the most important reason was that I wanted to honor one particular vet. A man who does things quietly and does not seek recognition. Ron Mercinheimer (I hope I spelt that right) or Dry Ron as he is known at Jake's. Without Ron, there would be no Jake's. And without him, both COVO and VVA would be much different. I hope to write a whole story on him one day but I just wanted it known that this first event, this special veteran event on the Fourth of July is my personal public "Thank You" to Ron.

I will be sending out another PSA on Monday and I hope that the media picks it up but rest assured, I will be doing it regardless of whether they do or not.