Fourth of July at Jakes 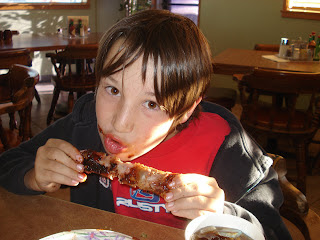 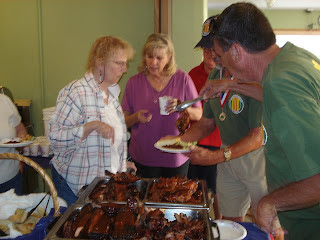 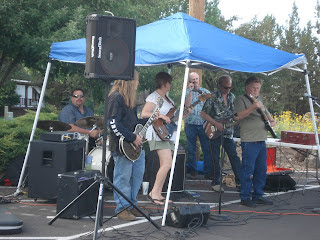 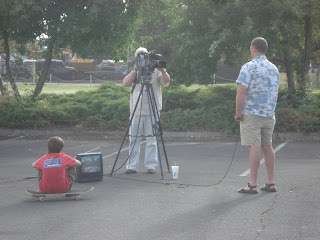 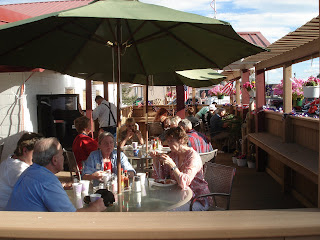 First off, I want to thank all of you who helped get the message out on this event.

The day started off with a bang rather early when I realized that we had not scheduled enough waitstaff. I quickly called around and brought in Judy and Ricci (one of our evening girls). One of the bussers wasn't feeling well and we sent her home thinking that the rush could not be that long.....we were wrong. Group after group showed up and the numbers seemed to overwhelm us from time to time and then we would seem to climb back out. Being short on help, it was important that we all back each other up and the crew really pulled together as a team. Needless to say by the end of the rush, we were all pretty beat up.

Somewhere in the middle of it all, Z21 news called and asked how I felt about Christian Boris, their weatherman doing the weather from our diner. I was very excited and told Judy. But Judy was far to busy to be happy about it. I knew that would change as soon as she was able to collect herself.

After the rush, I drove home quickly to tape the news so that I would not miss it. I set up to tape the five o'clock, 6 o'clock, and 11 o'clock. Then I woke up 30 minutes or so later. I was so bushed that just fell asleep with the remote in my hand. I quickly jumped back into the car and began helping to get ready for the BBQ. Everything seemed to run smoothly as we setup, decorated, put out flags and signs, and Jimmy got the BBQ ready.

Between 4 and 5, Z21 showed up with their broadcast van. I had never met Christian before and was quite happy to see him show up in attire that I would and was wearing. Shorts and a Hawaiian shirt. He was quite a bit taller than I had previously expected. I brought him in to introduce him to Judy. "Isn't he taller than he seems on TV?", I asked her. "He is on TV?", she returned. As you can probably guess, we don't watch much news on TV. Christian handled it with a smile.

The vets showed up and I began telling them what I needed of them and getting them to set up their organization. My buddy, Richard Smith, showed up to man the front of the line. Richard checks the stamps for all of our events. As a matter of fact, Richard is involved in just about every special event that Jake's puts on. A vet himself, a former Sea Bee, and a former circus performer, Richard is just plain a great guy.

Carrie and Jay showed up and Jay quickly took to Christian. He sat out on the curb at first watching his weather casts. Shortly, he was sitting on his skateboard, watching the monitor that Christian watched. Before long, Christian was talking with him between shots, quizzing him on Geography. Christian quickly found out just how good Jayden was at the subject. It was so much fun watching them interact and I was so thankful for Christian's attention to Jay.

Next the band showed up. I was told that the drummer would be the man who sometimes drums for Merl Hagard so I was very surprised to find out that I knew him. I am old friends with his father. After he drove up, he told me that his dad sent his greetings. The whole night just seemed to be looking up.

The BBQ started off with a bang and we quickly ran out of room on the deck and back room area. We did our best to direct the diners to our front room area and were quite pleased to see customers inviting other customers to sit with them. This only added to the fun of the event. I checked with Jimmy to find that the BBQ was going just as well for him. He commented that he was almost leery of how easy the night was pulling together.

With the band playing, the people eating, Christian doing his broadcasts, and local cruisers pulling into the lot, I was really in my element and was enjoying going from one area to the next just looking for a problem to solve. As I walked by the band, Richard started belting out one of his original songs about "Shaky Jake". "You know shaky Jake.", he sang, "He is the guy with the bright Orange hat on. I realized that he was singing about me and the crowd seemed to love it. I gave him a smile and a wave and kept going on my rounds.

Only minor hitches such as the lighting the BBQ after changing out the bottle and handling excess water on the floor marred the perfect night. Our crew seemed to work well along side the Vets who had volunteered.

The night seemed to fly by and before I knew it, Z21 had left and the band was breaking down. We began to break down the BBQ and take down the decorations while customers got themselves favorite spots in the parking lot. I instructed Gene, one of our guys, to put out pickle barrels with water in them. Last year, even though I had asked for no fireworks on my lot, it quickly got out of hand so I wanted the water to put those old fireworks in to keep them safe.

I quickly noticed that although their was fireworks outside of the lot, all within the lot area were just enjoying conversations and calmly waiting. I later found out that our customers were policing our lot for us. Richard saw one lighting some and challenged the guy. "Lyle lets us watch for free here. All he asked is that we don't light off fireworks. If you want to let them off, why don't you go to one of those places that charge you to watch.". I was overwhelmed with how much they cared.

Just before 10 with the diner closed and almost secure, I ducked out and drove over to my house to watch the fireworks with my family. Carrie had our tripod out, ready to get those shots of the pirotechs coming off of the butte. We watched the fireworks together and then Judy and I drove over to Ron Mercenheimer's (the man who I started the BBQ in honor of) as his girlfriend, Debra was having a birthday party. On the way down Eagle road, we encountered skateboarders wearing dark clothes and skating down the road in the dark. It was kind of unnerving trying to see them with lights coming down the road the other way blinding you even more.

Around Midnight, Judy and I arrived home and I lost no time getting right to sleep knowing that I would be getting up early to witness Kent's big flight. I do remember feeling very content as my head touched the pillow and I quickly lost consciousness.

I am very thankful for my crew, for the Vets who volunteered, for the band who played so well, for all who got the word out, for the pleasure of meeting Christian and his cameraman, and for the honor of being chosen to be the event that they chose to broadcast from.
Posted by diner life at 10:53 PM

After the rush, I drove home quickly to tape the news so that I would not miss it. I set up to tape the five o'clock, 6 o'clock, and 11 o'clock. Then I woke up 30 minutes or so later. I was so bushed that just fell asleep with the remote in my hand.

Yesterday, I passed out on the sofa with dryer sheets in my hand while waiting for the wash to finish with our kitchen towels.

Reading your comment about falling asleep with the remote in your hand absolutely cracked me up!

Sounds like you had a stellar 4th of July. Nice job!

Hey did you guys see Kent when he flew overhead. He landed in Cambridge, Idaho which is up between Weiser and Tamarack.

Thank you Lyle. We had a nice time coming to your event:)