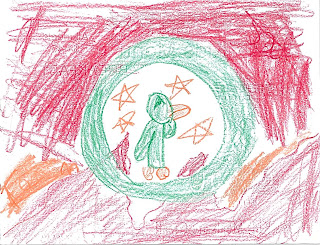 Last evening a young man came in with his parents to eat. I watched as the waitress gave them their menus and took note that she had not given him crayons for his kids meal menu. He was wearing an Oregon Duck sweatshirt so I walked up to the table and said, "I know you want crayons.". He looked at me with a look of question and I said, "Do you know how I knew? Because you and I have a bond.". Now, he was wondering what this bespectacled bearded old grandpa was talking about.

I showed him my cell phone holder with the big Oregon "O" on it. "Just like your shirt, huh?", I stated. Then he got excited. "We have a bond with my Mom too.", he said. And then he asked his mom if he could see her keys. He proudly showed me her Oregon Ducks house key so I showed him mine. "Wow", he stated, "My mom and me and you." And pointing over to the man who I assumed was his dad, he said. "But he doesn't have our bond.". I leaned over and said, "That is OK. We let Beaver fans in here too.".

When I arrived this morning, this picture was waiting for me. I knew who had made it. My new little Duck fan friend.
Posted by diner life at 5:59 PM