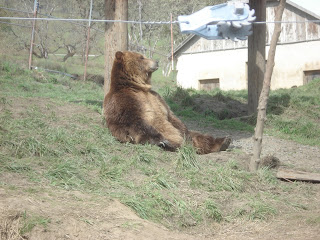 It could not have come at a better time. I spent allot of Thursday laying down. I felt like I had hit that wall that we all hit from time to time. My own diagnosis was working to much....spending to many hours trying to make sure that things were as they should be, especially in these present day economic times. I constantly remind myself that my location is pretty much the worst location in town so it is of the up most importance that we do not let our guard down on anything. To survive, you must be a destination not just a brightly lit building on the side of the road (of which we are neither).

So, early on Friday morning, Judy, Trin, Jayden, and I jumped in Trin's car and headed south. Our destination was the Wild Animal Park down past Roseburg. We drove down to the Crater Lake junction and took the road around Diamond Lake. The road was a very pretty drive but extremely windy and Jay had to roll down his window a couple of times as he started to feel it in the back seat. We took our little dog, Mia, for her first drive and she seemed to really enjoy it resting on Judy's lap for most of the trip.

We arrived at Winston just after Eleven and stopped at the local Subway for a quick bite before going into the park. A line of cars seemed to follow us into the parking lot and Judy quickly jumped out and went into the store, putting our group at the head of the line. A small field across from the store brought relief for Mia and I had to go through quite a crowd just to get into the door. Judy already had our sandwiches going and being the restaurateur that I am, I was putting the numbers together as I watched the employee make my foot long. I know that the promotion is to get numbers into the store and to keep the piece of the fast food pie but they were not panning out in my mind. Lets see, six ounces of chicken breast, a foot long special bun, olives, banana peppers, tomatoes, lettuce, and a very expensive dressing for the condiment. I had the food cost pushing half of the price and then taking around five minutes to make at $12 an hour after you take in the payroll plus the taxes and work comp. Now, you add in the wrap, bag, drink cups (we drank water), and an average of the costs to keep the building going (Lease, utilities, upkeep, maintanance, and disposal) and I was sure that they were paying me to just take that food away. Anyway, I guess that was their problem, I was suppose to be taking a break.

We drove into the park and saw the signs that said, "Absolutely, no pets in the park.". We reluctantly took Mia to the kennels at the front of the area. A sign told us that we needed to purchase a lock at the park entrance. I carried Mia to what looked like a ticket booth at the entrance to their mini zoo. No one was there but many stares came my way as I dared to bring a pet into the park against the regulations. We walked down to the entrance where the cars went in and managed to get the attention of one of the people there who sold us a lock. If you ever end up going to the park with your pet, bring your own lock, it is much cheaper.

We then drove into the park on what ended up being the perfect day. Probably the warmest and driest of the week, many of the spring breakers seemed to have the same idea as us and we found ourselves in a long line of cars that slowly crawled through the park all wanting to get the best vantage point to see the various zoo type animals all roaming free within their prospective environments. The funny thing was once you got to that perfect point to see the animals they had moved or you felt the pressure from the cars behind you to get their turn to get that just right perfect spot. One difference that we noted from previous visits was that you can now go through the entire park with your windows rolled down. I noticed many kids sitting on the window sills of their cars or standing up in the open tops. The lions and tigers are now behind fences and the Grizzly bears are behind an electric fence. The electric fence works the best for picture taking but I could not get the visions of Jurrasic Park out of my mind and wonder what would happen if you were feet away from one of those huge beasts when the power went out in the park.

We came upon the Elephant car wash and watched as a rather large elephant sprayed a van with water and than ran a sponge across the side of it. It wasn't what they showed on the news where they had elephants on both side of the news rig. There was just one elephant and he was on the opposite side of the car so the various moving rigs were jockeying to get the best spot to either take pictures or video. With the entrance cost over $15 a person, we had decided that we didn't want to spend the additional twenty to get our car sprayed by the big behemoth.

After our first run through the park, we stopped and went inside the mini zoo. It was very interesting and I noted that one could come to the park and actually go into their zoo for free. I wondered how many locals did that from time to time. Judy spent most of her time taking pictures of the pink flamingos and she let Trin and Jay ride on a camel before we left and went back to our car for the second time through the park. Judy seemed to be a little on the rushed side and I could only take that to mean that she was worried about her little dog who was locked up in that large box with all of those bigger barking dogs that were locked up in their big boxes.

We decided to go through the park a little faster this time as we knew that places that we wanted to go. The park had a speed limit of ten miles per hour and we got a few stares as we passed others up in their lines as they waited to get to that just perfect spot to take that just right picture. The lions, bears, elephants, and tigers were our destinations but we still had to wait from time to time as other cars in front of us stopped in the middle of the road or waited in line to go through various fences. We stopped for a passing emu who seemed to take an interest in our car. Judy had her window down an inch or so and the emu went into attack mode. As Judy videoed the bird, I hit the down button on her window raising a shriek from her and laughs from the back seat.

Arriving back at the entrance, Judy and the kids jumped out of the car and went quickly over to the cage holding the animal that Judy enjoyed the most, Mia. Mia, in turn, seemed very happy to see her and we began our journey back to Bend. We took the freeway up to Eugene, stopping in Rice Hill for a snack along the way. Rice Hill used to be a major destination truck stop like Jake's back in the day and is now a large corporate Pilot stop. As I looked around a little, Trin asked me if I missed the old truck stop days. Yes, I miss some of my old trucker friends but am happy where I am at.

We took the Willamette pass coming back as it is more scenic and made one more stop in Oakridge before the last long ride. All in all, we spent two and a half hours in the park much of that time in the car and seven and a half hours riding to and from the park. We arrived back in Bend, happy to be out of the car but refreshed from a day away.
Posted by diner life at 4:38 AM

Hi Lyle, Glad you had a good time at the park, I tried to tell Summer to tell you could couldn't take Mia through the park, sorry!! Yes all the locals know the mini zoo is free :) I used to take my kids there once a month when they were little, we only lived maybe 10 miles away. The end of April is the best time to go if you like the baby animals, Christmas is amazing! we try to go every year at Christmas they have a night time show and lights it's pretty neat..