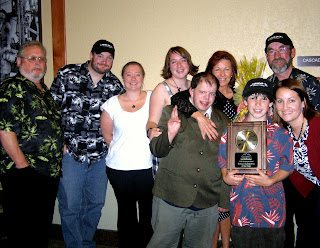 I spent most of yesterday just trying to keep my mind busy.

The day seemed to take care of that for me leaving me not really much time for contemplation. I drove out and purchased Hawaiian shirts for Casey and Jim. My good friend, Mike Schmidt, who was sitting at our table and I had come up with a sort of alternate dress for the guys at our table. I am not very good at ties and was not sure what to wear when Mike stated that I always had a ball cap on so why don't we all wear black Jake's hats. I said if we do that, we should also wear Hawaiian shirts. So, our dress code was set. I did worry a little that this change from the norm in a sort of formal type setting might lose us some votes but decided that it might be more right to just be me.

I ate lunch around 2 or so and then Jim and I delivered the evening meal to the Volunteers of Medicine. Upon returning, Jim had one more buffet to prepare for another group that was meeting at the diner that evening. I left around 4 to try and just rest a little before going out. That didn't happen as the Bulletin called to ask for some pictures to use for our race night event and I ended up going back down to the diner which probably was best as I needed to just keep going.

We all met up in the entrance around 6:15 and got seated around 6:30. I looked around at a sea of tables with most men in shirt and tie. I was happy that we were situated right next to CORIL and found a nice surprise with Eric Bernarbo there. Eric has worked at the diner on Thursday mornings for the last eight or nine years. He loves to walk amongst the customers and talk with them as he buses and sets tables. Also with CORIL was Rachel Sedoris and her father. We save our trimmings from the steaks for her dogs and have her picture up on our wall.

The event started with videos of all of the three groups: Organization of the year, Small business of the year, and Large business of the year. We were very impressed with the video of Home Care IV and Judy and I talked openly that we both felt that their chances were the best at winning. I must admit that at first my nerves were getting a little to me and I was kind of hoping not to win just so I would not have to go on stage.


The program started and it was set to the TV show, American Idol. Carrie and Jayden watch this show each week and both of them seemed to really enjoy the enactments of the various celebrities especially the woman who did Paula Abdul.

CORIL won the organization of the year and we all jumped up and clapped. Watching Jim Lee as he walked up to the stage and seeing Eric and another girl up their with him and my mind kind of changed. I began to want this award. I felt that I could go through with it all. Especially with our close relationship with them. But, both Judy and I felt that Homecare had a very good chance and Judy leaned over as our category began and said, "Well, at least we had a good dinner and time with our family and friends".

Our singer did a rendition of the Bee Gees song, "Staying Alive" with the words changed to "Eating at Jake's ". I felt it so fitting as the Bee Gees came from the same area of Australia as Judy. As a matter of fact, her sister, Gaye, once dated the original drummer from the popular band.

The announcement came and I heard chants from tables around me, "Jakes Jakes Jakes". It felt very good just to hear that but when they called our name, the feeling was one of probably a cross between elation and shock. Judy started to cry with happiness and I hugged her as we walked to the stage. To our surprise, Eric ran up to join us. It was all quite perfect except my first words of acceptance......."Uh, Wow!".

I had thought of what I might say if I was to have won but knew that the night was going by faster than I had figured so I just went to a straight up thank you. I went to acknowledge the people at my table and all of a sudden my brain started to scramble with names of my own kids. I kind of stuttered and just said how thankful that I was that my entire family was there with us. I stared through the lights at the table and collected my thoughts as I acknowledged the rest of the people started with Jimmy and his wife Char, Mike Schmidt, and Vivian Gulley who had joined us. There were others that I wanted to thank that had been so instrumental but I turned to Judy and told her that I was losing some of the names. She gave me a hug and I was able to come up with the ones that were the most important. I had intended on thanking God first and foremost but the thought at least came to my mind so I was able to make that needed statement of faith in time before stepping down.

Eric wanted to say something so we gave him the microphone and in typical Eric form he told them that he loved his boss meaning both Judy and I. I was proud of Judy for at least leaning forward and saying "Thank you". I knew just how hard that was for her and how if it was not for Jakes, she would have never done anything like this. Her time as business owner has really helped bring her out of her shell.

My mind was swimming as we exited the stage and were taken out to the hall on the side for pictures and an interview with KBND. Eric joined my family there and when I was interviewed asked if he could speak also. Eric said, "I work at Jake's. I come to work at 8:30, 9 oclock. I start work at 10 and when I see my boss, I say, "Hi Boss, how are you.". And he says, "Great Eric, how are you.". That was all that Eric had to say as he grinned at the newsman.

Pepsi won the large business award along with a distinguished businessman award going to one of the founders who has passed away with cancer. Then, our friend, Taffy Gleason, from the Bend Community Center won Citizen of the Year.

We ran into Taffy and a companion as we both were leaving. Her friend came up and shook my hand and said, "Congratulations, good job.". "Thanks", I returned. Then he said, "By good job, I met staying true to yourself." And he pointed to the way I was dressed and I thanked him once more feeling almost as good at the acknowledgement as in the award itself.

All in all, it was one crazy wild night and I slept real well for a change afterwards. It was an award from our peers that I will not likely forget the rest of my days.
Posted by diner life at 7:35 AM

How exciting - and well-deserved - Lyle!! That's so incredible, congratulations!!

Congratulations, Lyle! :o) You do a great job, and your commitment to the community shows.

and, Kina, the feeling is very much mutual. I know Baker City must love you guys.