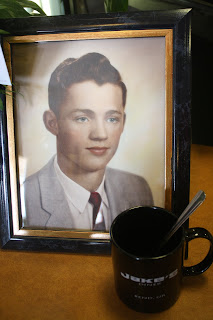 I awoke in the morning with a sort of revelation in my head. Earlier on in the week, I had been called and informed of the passing of my friend, Gene. I was asked if they could use the back room for his service. Then, on Thursday, I was shown where that was put in the paper. I realized that the back room was not going to be able to handle a group the size that I expected. We would need to turn over the front room to them.

Lots of thoughts began to flow through my mind as I processed all of the problems involved in doing such a thing. I also weighed the pros and cons with the pros far outweighing the cons. After all, the main room was where Gene usually went. The day was suppose to be warm leaving the deck as a good option and if we used the back room, no one would be able to go out there anyway.

I hit the ground running as soon as I arrived at work. How to set up the room. Who to get to transfer the regular customers to the back room as they all arrived. Gerome from the funeral home called and I was happy to hear his voice knowing that the service would go off well under his guidance and care.

By 10, I was going strong with things happening all around me, needing my attention. It was one of those moments when everything seemed to be happening at the same time. I knew that I needed to just relax and go into my zone, handling the problems as they came in front of me. Sort of using the multi directional thinking that I had taught myself years ago to handle what others might call multi-tasking.

Lunch came soon and I sat down at the counter with a friend. It was just like I would do with Gene from time to time and it made me pause a bit in the experience to take more time to take in the moment. This man next to me was very close just like Gene was and I realize that one day, it may be him going away also. I tried to focus on the moment but soon realized that his hearing aid was not allowing him to hear me very well, so I just moved back a bit knowing that just sitting there eating with him was a form of communication of it's own.

At 1, we began turning over the floor to the coming service, moving new customers into the back room, and cleaning off the coffee counter for a place to set up the food for the event. I moved the lectern behind the counter where the Band of Brothers usually set up and plugged in the amplifier and microphone. Gerome was to show up around 1:30 to make sure that his part was ready to go.

I was out running an errand, when the diner called me. Gerome was there but there was a problem. He had been in an accident and needed to just drop off his stuff and head to the hospital. I quickly handled my errand and returned to the diner. The priest was at the door greeting people who had arrived for the service and I took him to the side for a second to discuss the plans. He told me that he would open the time with a small talk and then he was suppose to turn over the mic to Gene's friend, Harry. There was a problem, however, in that Harry had just called and was home sick. I quickly agreed to take the mic and say a few words about my old friend and then turn it over to anyone who wished to say something about Gene. I realized that without Gerome and without Harry, I was pretty much on my own now. I was going to be officiating the service. There was no time to prepare and no time to stress, it was just happening.
I remembered the story that I had written a few days ago about him and quickly printed off a copy intending to use it as a sort of notes as my mind was so preoccupied that I really wasn't sure what I was going to say. I soon realized that just reading the story would probably be the best thing to do so I folded it up and placed it in my back pocket.

2 PM came and people were still coming in the door so we waited until we felt most had arrived. I looked over the floor and was glad that we had made the decision to move to the main floor. A quick assessment showed me a count of over 60 friends and family. I noticed many of his counter buddies sitting around the floor with other employees who had been very fond of Gene.

Around 2:15, I told the priest that we should get started and turned on the mic for him. The acoustics on our main floor are not the best and when the floor is full, the din of conversation noise can make it hard for a speaker to get the rooms attention. I also noticed that the plants in the middle of the floor, kept some from seeing the speaker. I moved the plants as the priest struggled to get their undivided attention.

He did a great job, comforting the family and speaking of his own knowledge of Gene. After a prayer, he turned the mic over to me and invited others to follow me with their thoughts and remembrances of the man we were honoring. 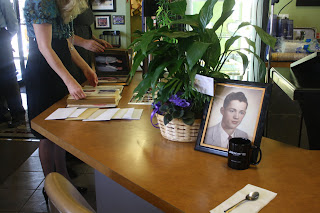 I introduced myself and showed them our memorial for Gene that we had set up. We had taken all of the chairs away from the counter except one. We had then placed a setting for Gene. Behind the setting, we placed a picture of him. To me, it was if Gene were right there with us. 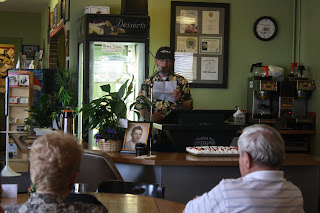 I then read the story. I wasn't sure just how it would be taken but small laughter and nodding of heads soon made me realize that what I was saying was being regarded OK. After the reading, I turned the mic over to others who might want to say a remembrance or something. I noticed a friend, Ken, looking like he wanted to say something but just not sure. I encouraged him but did not want to embarrass him so I stepped back and waited.

The silence was deafening. I turned to the priest and whispered to him of the awkwardness of the lack of any noise. He said that sometimes people want to say something but they just don't feel comfortable. So, I went back to the mic and asked once more if there were any thoughts that someone might want to say. I also told them that I understood if they did not feel comfortable, that we could just contemplate of our times with him. 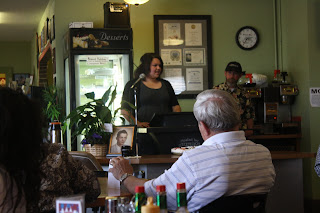 All it took was one. Then it was if the flood gates had opened. I tried to keep in my head who had raised their hands and his friends and family, one after another began to unfold a story of it's own. The most touching was his grand daughter who actually came up and used the mic. She struggled with emotions but her words were well placed. Story after story were spoken and I realized that many of them were being spoken to me. I was musing on that thought, realizing that by speaking to me, they were relieving their fears of speaking to the crowd. As I listened, Judy whispered in my ear that someone had arrived with Gene's ashes. I didn't know what to do, so I had her tell the priest knowing that I needed to keep my focus on listening so that the person speaking was kept comfortable. 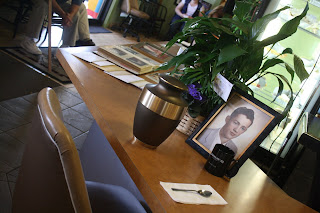 Out of the corner of my eye, I noticed that he had placed the urn at the memorial that we had set up for Gene at the counter. The thought of that hit me hard at first as it was as if Gene was right there with us. I looked around the room and noticed that it was affecting others in the same way with tears beginning to flow on some of their faces.

As I listened to memory after memory, I was reminded of a message that I had gotten earlier in the day from an old friend. This friend had recently lost her sister to cancer. She told me of the profound and extreme gift of being able to love and experience her sister through her sisters children and I realized that I was sharing that experience right here, right now by seeing my old friend in so many ways through these various thoughts and memories of his family and friends.

I think we all enjoyed the many thoughts and the ones who were able to speak were given a sort of release in being able to verbalize their memories. The space between the stories widened a bit and I realized they were coming to an end. I remembered back to a service that I had been to once, where the preacher truncated the thoughts to keep it on his time table and I did not want that to happen here. We were going to speak until all who wanted to had spoken. 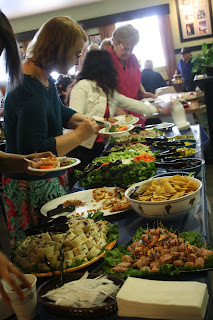 When I was sure that all had had their chance, I thanked them all for coming and invited them to enjoy the food and each others company encouraging them to keep sharing amongst themselves. Today and the moment was to be about Gene. 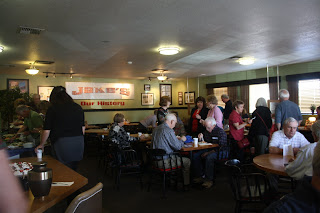 Judy had taken pictures of the event using one of the waitresses cameras so right after it ended and while people were eating, I went back to the office and downloaded them onto my computer. I tried to burn a disc of them but for some reason, my computer would not finalize the disc. Worried that Ronnie, his wife would be leaving soon, I quickly put them on a thumb drive and presented them to her. She was quite surprised not realizing that Judy had documented the event as she had. Ronnie asked me for a copy of my story and I pulled the one out of my pocket that I had used telling her that I could make her another copy if she wanted.

4PM was closing in and we began to convert the floor back over as people would be arriving for supper soon. I felt good that the event had gone well.

I remember talking to the priest right afterwards. We discussed how it had gone and I told him that I appreciated his casual dress for the occasion as it was just as I knew Gene would want it. We talked of the ministry that Jake's has and I told him how much that was evident to me in that we had this service today and a wedding on Monday. "Oh, you mean Red and Vivian?". I was surprised that he knew of it but one of his places to visit is where Red is living.

Afterwards, I was talking with some of the guys who had taken their daily coffee club into the back room. We were remembering days past in Bend and at Jake's. One of them brought up the memory of another old friend from way back, named Ernie Beaver. I was taken back in time as I remembered that we had his remembrance at the diner right after it opened. Like Gene, this had been his place to go. I told the guys that although we had quite a few of those over the years, this had been the first time that we had actually had a service here.

And come Monday, we will have our first wedding.
Posted by diner life at 2:21 AM