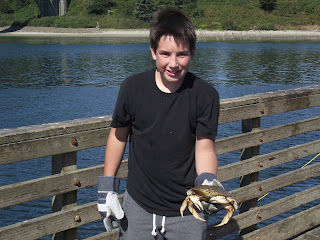 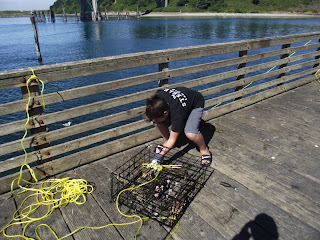 He was so excited as we set ourselves up to cast out our first trap. I let him do all of the work, reaching in and placing the bait inside the inner box and I helped him zip tie up the side of the trap. One problem became immediately apparent as to how I was going to cut the tie when we brought them back up. I also realized that we did not pick up a measure to insure that we had legal catches.

I left Jay on the pier and drove back to the store, getting the small plastic size chart and a pair of wire cutters to cut the zip ties. I arrived back at our spot just in time to raise the first pot. An excited young man had already talked to a couple of other crabbers and informed me that we had our traps on the wrong side of the pier. The tide was beginning to go out and we needed to change sides or chance getting the trap caught on the pier below as the tide drew it under. 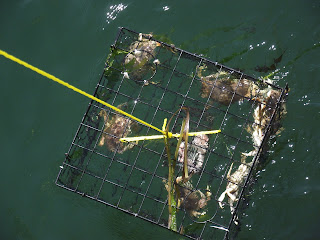 Jay started giggling as we the first trap broke through the water below loaded with crabs. Our first catch. I had Jay hold it at the water line as I took a picture of it. He struggled getting it out of the water so I took the line and helped him raise the first basket and lowered it to the pier. The first thing that I noticed was the clicking noises that the captured crabs made.
I cut the zip tie and let Jay check out the captured crabs. We could only keep the crabs that were 5 1/2 inches and that were male. We had studied the pictures and this became pretty easy. Jay drug female after female out of the pot. As he carried one over to the edge, it's claw grabbed his finger through the glove. "Ouch, this hurts, Papa!". He managed to shake it off and it tumbled into the water. "I bet it did", I returned. He had just learned his first lesson on how to carry a crab. 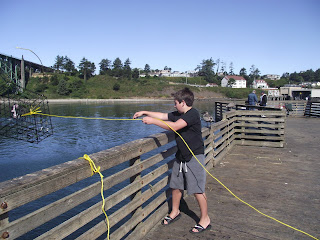 We zip tied the trap and moved it over to the other side of the pier. Jay threw it in as I snapped his picture. Then we hoisted up our second trap. This one too was loaded with the clicking crustaceans and Jay laughed as he realized that we had caught our first legal male crab. After a picture, Jay placed it in the bucket and we reset the trap and cast it out also. 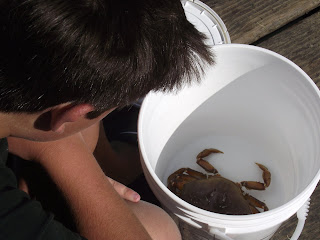 I moved our things over the to the new side of the pier and then noticed Jay. He was sitting in his chair with the bucket in front of him just gazing down at his new prized possession. He had caught his first crab. It was as if he was bonding with it. I quickly grabbed my camera and snapped a couple of shots. "Are you going to name it?", I asked. In previous adventures, he had named fish that we had caught so I thought it appropriate to ask. "Nope.....I am going to eat it.", he answered.
With each hoist of the trap, we became more seasoned pros at this sport. "This is the easiest fishing that I have ever done.", he announced.
Around 12:30, we called it a day. I wanted to have the time to get the crabs cooked and iced down for the trip back home. I had intended on getting home by five or six as some of my buddies wanted to get together and play some fun poker.
We drove down to the small crab store that we were told about just south of town. Leaving the bucket next to the crab cooker, we went into the little restaurant behind and enquired on what we needed to do. We found that they would cook the crab for $5 and clean each one for us for 50 cents more. We paid for the service and ordered up some lunch. Funny, neither of us wanted fish and we both ended up ordering up some corn dogs instead. "We have the best fish in town", the server smiled as she must have been laughing inside over these two guys who were crabbing but did not really like crab.
Around 2 or so, we carried our catch out of the store and iced it up for the way home. The lady in the store had been gracious and showed us how to clean our crab for future reference.
A tired but excited grandson talked all the way over the pass but it became evident that I was going to be late for the poker. We stopped in Sisters for a bite to eat at the new Hawaiian shop behind the market that my friend, Stan, who owns the building told me about and then headed the car home arriving around 7.
I dropped a happy young man off with his mom and headed home with one of the crabs for Judy's supper. We had caught three keepers and Jay kept the two larger or his mom and friends.
After arriving home, the day just seem to hit me. I was so exhausted from the day that my stomach was off, so I took a shower and just crawled into bed....totally tired but happy. I had won a battle, enjoyed a day with my grandson who I love so much, and had done something that I had never done before in my life. Sleep took me seconds after my head hit he pillow.
Posted by diner life at 1:20 AM

You have such a great guy in Jay. I am so proud of the young man he is becoming. Good Job mom and Papa.
Kathy