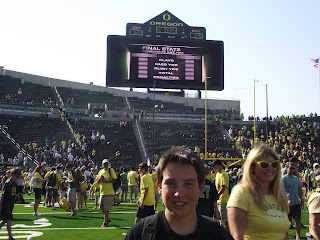 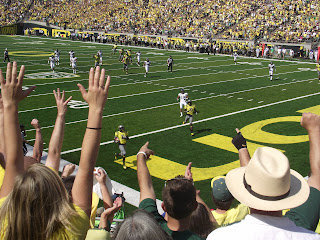 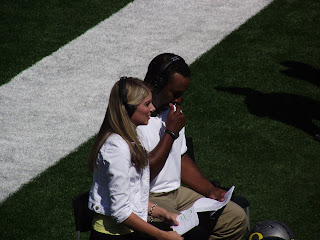 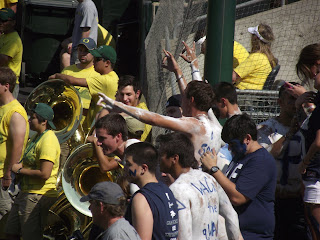 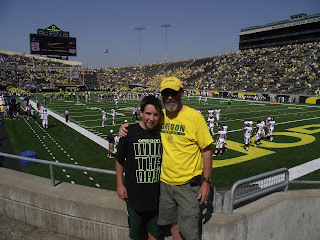 Every year, Jay and I go to a Duck game. It is my birthday present to him. I always let him pick the game and then I go out looking for the best seat for the price that I can get. This year, he chose Nevada.

After searching around, I managed to get two seats on the south east corner of the field, 8 rows up.

We arose around 6AM and drove to Jake's for breakfast. We then drove to our friend, Sam's house to follow him over to the game. Sam has season tickets and always tailgates prior to the game. Jay had told me how much fun he had last year going with Sam and asked if we could tailgate also. Sam had changed his spot this year and was with the Boy Scout group across from the stadium and I had found that we could also purchase parking there.

We followed Sam in and were stopped at the gate to pay for our parking. They agreed to let us park next to Sam so we followed him in. We were stopped three times along the way and had to persuade each one to let us continue on. The last one was adamant that we were not to park there. 'This area is for season ticket holders only.", he stated. Finally, he gave in with a "It will be your problem if you are caught.". We drove in and parked next to Sam in the middle of a field. All around us was shade but we were right out in the hot sun. Jay and I got out our chairs but our next problem became very obvious. Jay was struggling with the dry grass and his asthma. Fortunately, Sam's wife, Nancy had a bottle of pills and loaned us a couple to help him deal with his sneezing and breathing problems. While they didn't totally stop his symptoms, they made him able to deal with them.

We sat and talked as the boys threw the ball around. Sam and Nancy cooked up some breakfast sandwiches and we ate while we waited for the start of the game. The shade looked so inviting that a couple of us retreated to it while we waited and watched the boys as they set up a pick up game with some local kids. The only problem that I had was the language coming from the college group next to us. Both sexes were flying the F word as if it were a common word.

Soon, it was time for us to start our trek in so we locked up the car and walked out to the road. We were in a totally different area of the field than we normally sit so we walked around the outside of the field to find the closest entry. Jay was wearing our ice chest back pack but we had forgotten to pack in the snacks that I had packed for us. At least, we had water. I checked my wallet and realized that I only had $7 and checked the price of a hot dog...$4.50. I hoped that I would be able to use my card but knew that I would be OK as I had eaten just before going in.

We found our seats and realized that the people in front of us had purchased the in stadium seats that are put in place before each game. These took some of our leg room away which was a bit frustrating as the people never came to the game. We tried taking off the seats but found they were zip tied on so we just settled in and made ourselves comfortable.

The Nevada team was warming up in front of us and some of their die hard fans walked by us to yell at their team. We also watched the Fox Sports team as they did their pregame interviews just a few feet away from us. The stadium began to fill and the atmosphere became electric as the people began to ready for the first home game of the year.
As the game began, Autzen began to rock as only Autzen can. An excited grandson held up his hands in an O and yelled as the first kick off began. You can watch the games on TV but there is just nothing like the atmosphere of a live game. It wasn't long before Oregon had the game well in hand. The crowd yelled as they scored in mass. One of their new freshmen scored right in front of us which gave me my good shot of the year.
Jay asked for a dog mid way through the second quarter so we walked back and were disappointed to find that no food booths inside the stadium accept cards. Since a young man can not go to a game without a dog, I had enough for his and that was the important part.
The second half brought much more room around us as many left at half time not interested in the blow out that was ensuing. But, we had paid the price and it was our only game so we stayed there soaking in all of the ambiance and getting our money's worth.
After the game, we followed others out on to the field to round out the experience. We attempted to walk out where the team walks as it was a much easier way to get to our car but were stopped by security and told that we needed to find another way out. That meant up the long stair case to the top and back down the ramps on the other side. A task but also giving me my allotment of exercise for the day.
As we walked back to the car, a group of college girls ran by us giggling. We followed the girls into the parking lot and I cringed as one of them began spouting that F word again. I mentioned to Jay how much that bothered me. One of them must have heard as she turned around and apologised. "She is just drunk." came the explanation. It did give me pause to talk respect with Jay however. I can only hope that some of my words will stick in his head when he gets that age.
We had brought some smoked beef in gravy with us along with buns and Cole slaw so Sam quickly heated up the pot and we all sat around eating sandwiches and waiting for the traffic lines to dissipate.
Soon, we could see the traffic started to get lighter so Jay and I took our leave and headed out. We stopped at the mall and the Duck store to get the rest of Jay's birthday present and picked ourselves up a smoothie for the ride home.
We had noticed the fires on the way over so I decided to take the McKensie pass to see if we might be able to see them better. Sure enough, at the top in the lava flow, we could see the billow of one of the fires and actually see flames of another. We arrived there just as dusk and Jay and I walked around enjoying the dusk vision of things and the utter quietness of the spot.
Arriving back at the house a very tired grandpa and an equally tired grandson called it an early night. Another great adventure and more quality time. Jay recons that our next great adventure needs to be deep sea fishing......I am not sure that I am ready for that one just yet.
Posted by diner life at 9:14 PM

I bet the wild fires helped put perspective on all the little hiccups you had - almost not being able to park, college kids not behaving, seats that kept you hemmed in, not remembering snacks or enough money, and not being able to walk out with the team. It all really seems minor in the big picture, doesn't it?

I imagine those that are losing their land and homes to those horrific fires or the men & women fighting them, would gladly have taken your place that day and not remembered a whit about how they were possibly inconvenienced.

I am glad in the overall scheme of things you seemed to have a good time. You have a pretty neat grandson.

I had a great time.....and I know how much I am blest. Thanks for bringing the perspective in line.

Lyle, we switched parking and are now out of the "pasture" - it was great as always to hang out with you & Jay and hope to do it again soon - this time without the hay fever!