A day at Autzen

As with most events, I struggle with the night before.  So, this time I took a pill.  And even with that, I was up at midnight with all of my last minute thoughts.  What if this happens....and what if that.  Around 3 or so I put a post up on facebook and then went back to bed...hoping for an hour or so of needed rest.  I was to be at Jake's at 630.

I awoke and looked at the clock that said 635.  Jumping out of bed and into the shower, I still made it there by 7.  I kept telling myself that this was their day and we wanted it to be special.  I tried to make it a point to see every one of them and press that point.

The cooks popped me out a plate of my usual (scrambled eggs, avocado, and sausage with corn tortillas) and I went to pour some coffee and was reminded of my nerves as my hand shook while pouring it.  I went off into the back room to be by myself and try to collect them. 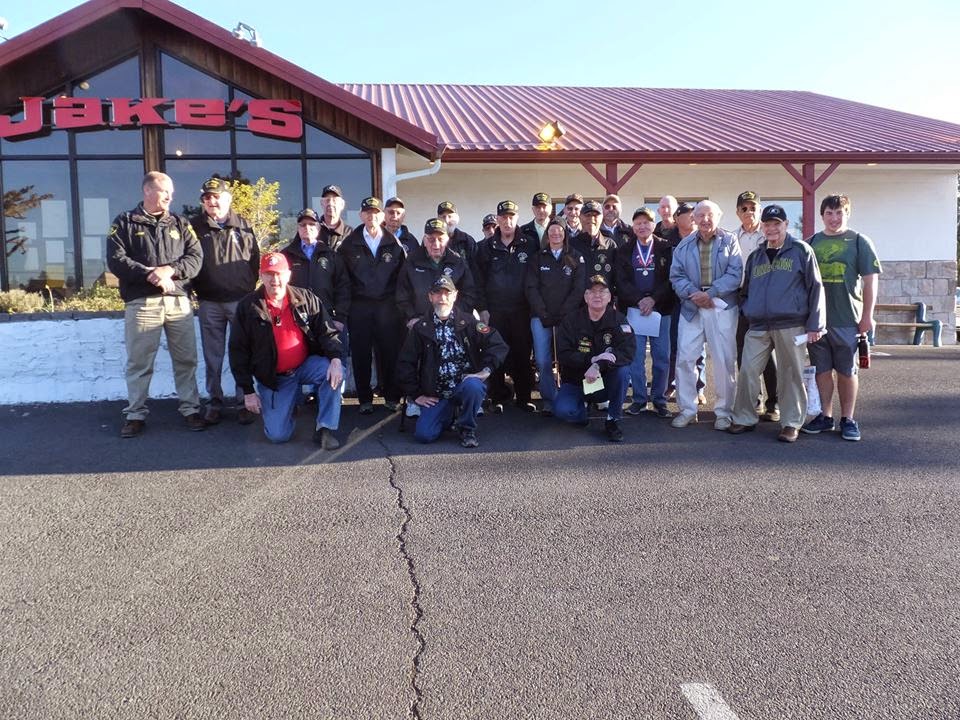 Zin, who knows me well, sought me out and gave me a hug telling me all would be well.  And...I knew it would.  I asked him to get everyone out front for a picture before we were to leave.  The guys all lined up in front of the diner for a last minute picture opportunity for wives and children of the guys before they went off on their great adventure.

The two Deschutes County Sheriff vans were soon loaded with guys in their 90's like a bunch of excited kids heading out on a class outing.  My good friend, Neil Mackey, drove the point with Lt Deron McMaster following and I behind them both in my Jeep. 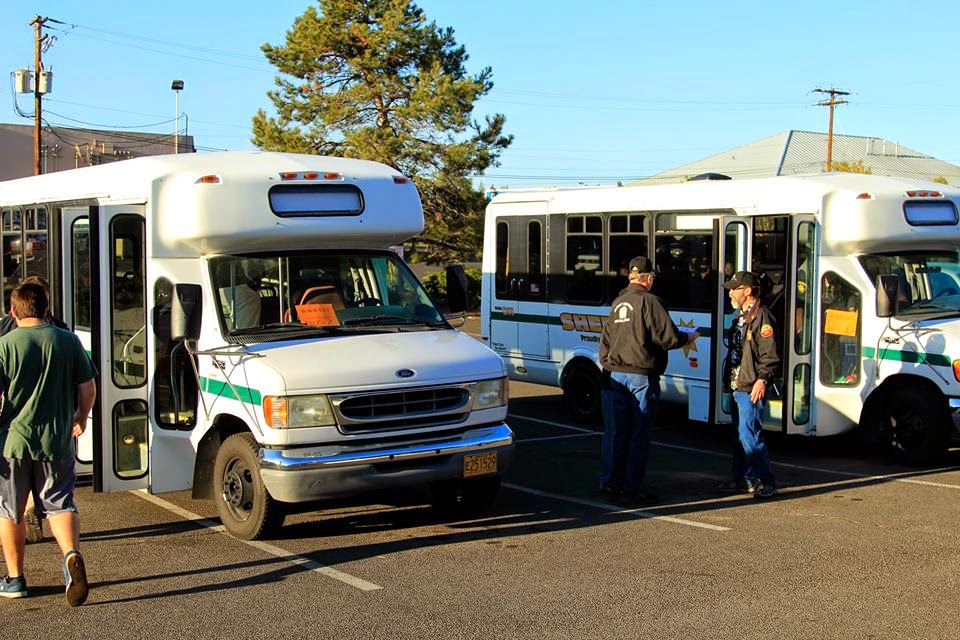 As we arrived at Belknap springs for their rest stop, I realized how far we were behind schedule.  I kicked myself for not getting going at 7 instead of 730.  So, I tried to encourage them to make haste and get back on the bus quickly.  I figured our 20 minute stop was probably a record for 20 some 90 yr olds getting off a bus, relieving themselves in a place with only one bathroom, and loading back up.  I also asked Neil to pick up the pace if he would.

We pulled into Autzen at 1020 and the Ducks had a cart ready to take some of the guys down to the field.  Most of the excited guys did not want to wait for the cart to return and made their own way down to the field.

A girl from "Goducks.com" asked me for some interviews so I looked around for some that had not been interviewed in previous trips and lined her up with three.  While they spoke, I caught up with Kyle Wiest (Oregon's football director) on the sidelines.  Marcus Mariota had been there the day before but he had not seen him that morning.  One of the guys who had been to Iraq had left me with a coin for him that he had gotten in Baghdad.   On one side was the symbol for Iraqi Freedom and the other the Oregon Ducks.  We talked of the kids and he told me that the coach had used the story of one of the vets that I had sent him to prep the team for today's event. 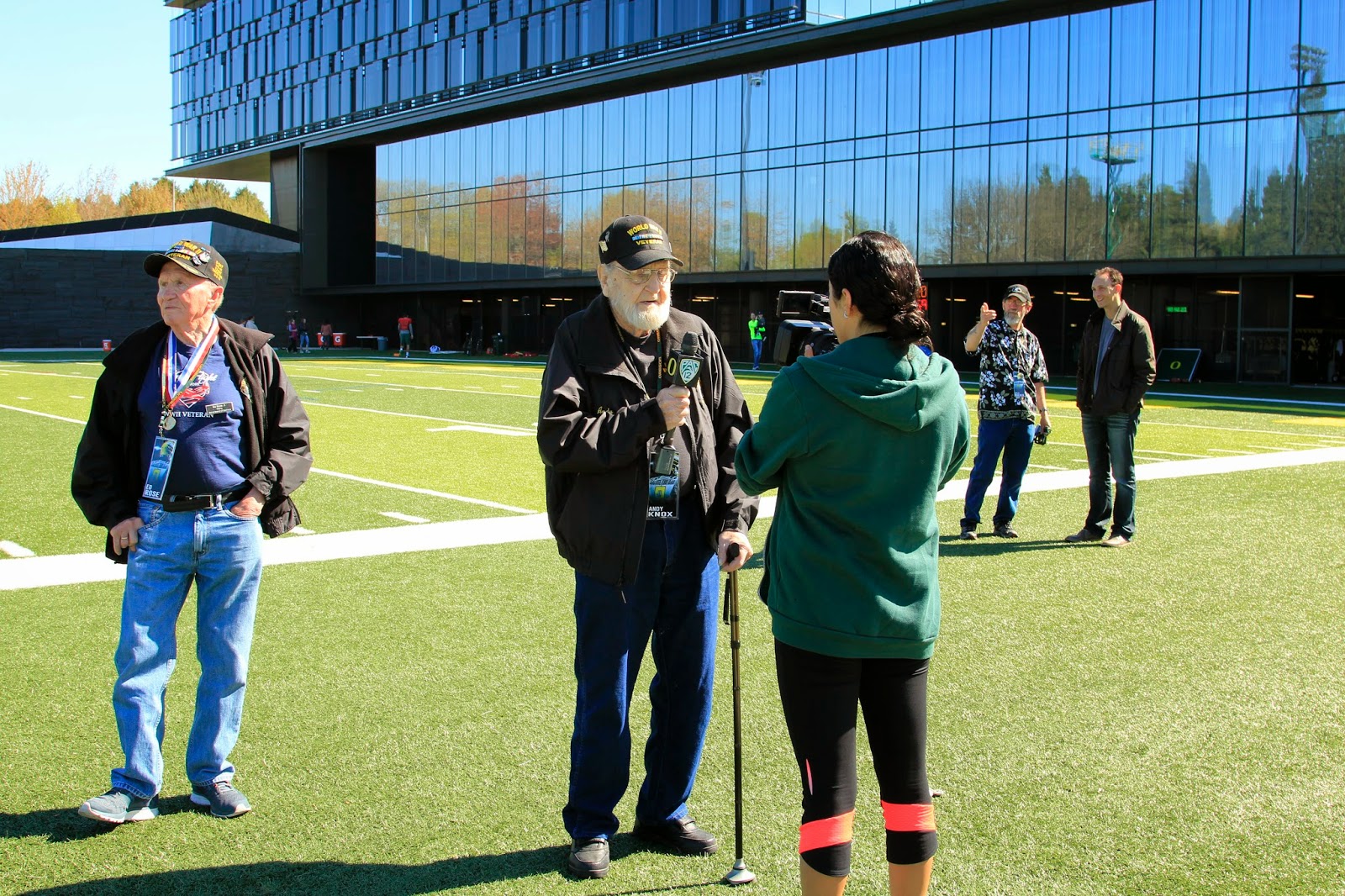 Before the third man was finished interviewing, the end of practice arrived and the coach was bringing the men in a huddle.  I rushed over to hurry the interview while Kyle jogged over to the huddle.  Collecting all the guys, I headed them over to the side of the huddle.  As I got the last man there, I managed to hear the coaches introducing the recruits that were there checking out the school.  One of them was a transfer from Notre Dame. 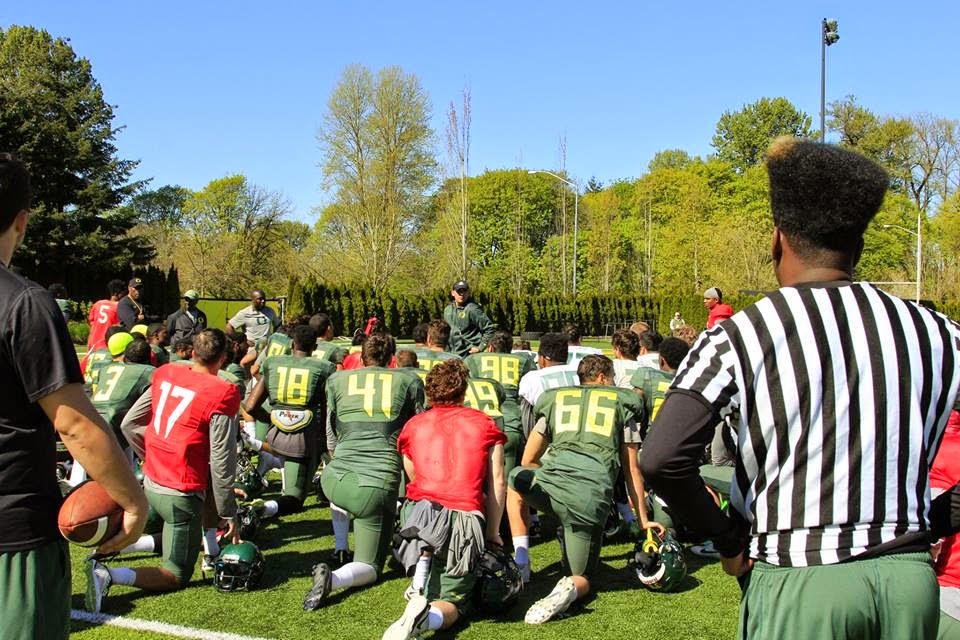 The coach called the guys around us and soon we were surrounded by trees.  I looked next to me and Thomas Tyner was standing there.  I shook his hand and told him that his jersey was on the wall of our diner.  I kicked myself later for not giving him one of my cards hoping that one day he might stop in so we could take a picture in front of it. 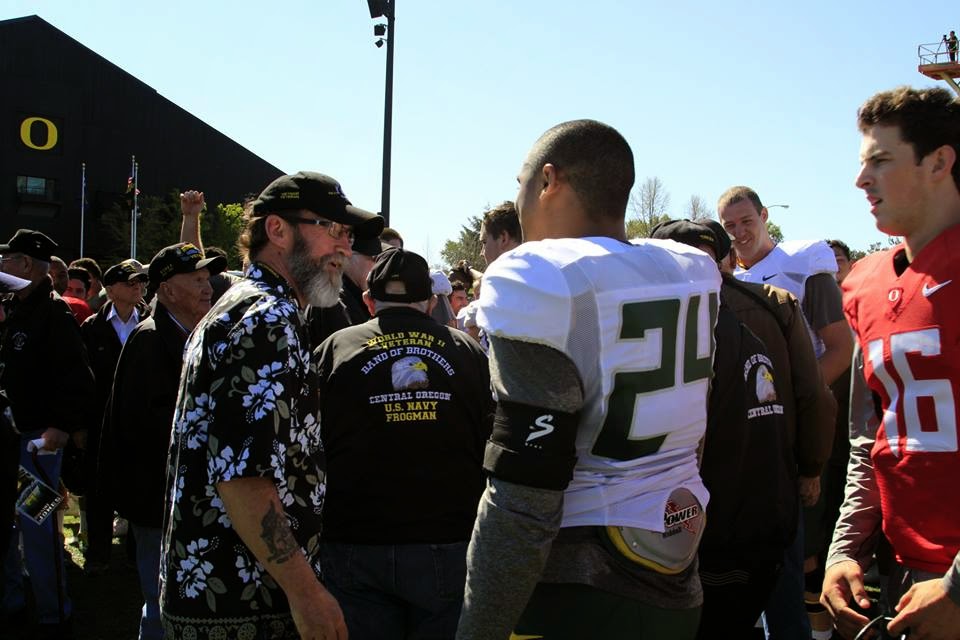 We were in the middle of the scrum of players and old vets and I noticed one of them coaching Am Denfield to call down the practice.  I grabbed my camera quickly to capture the moment as Am is our only Beaver fan in the group. 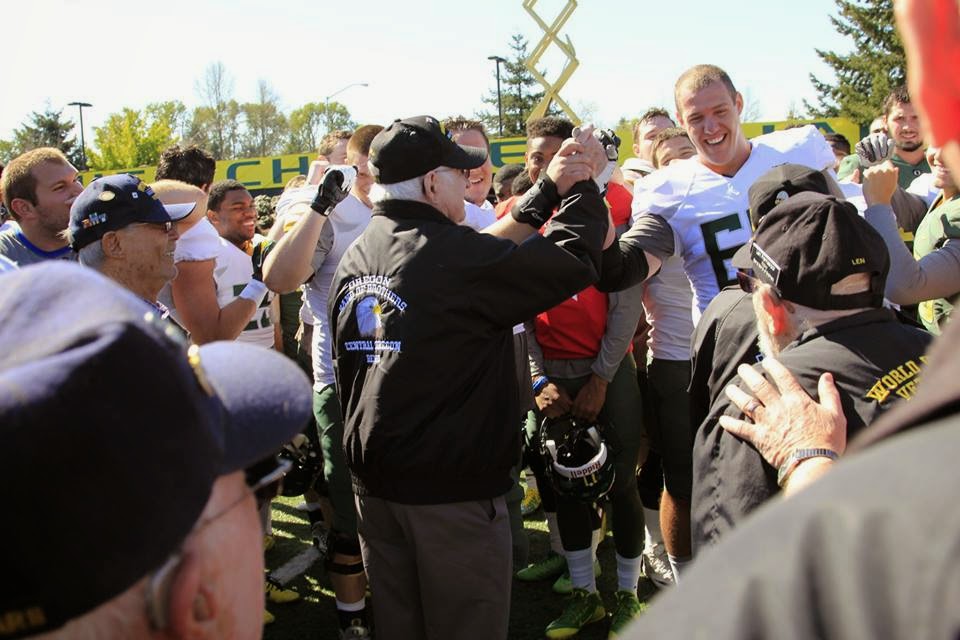 As the practice broke up, I looked around and saw huddles of what looked like special team talks and thought them that until I saw Carrie's photo captures later.  The players were surrounding individual men and thanking them for their service.

One group of mainly linebackers were surrounding a Marine named Harvard Lewis who had survived three different landings in the Pacific.  Harvard walks stooped over with a cane.  The guys all hand their hands on his shoulders and were honoring him.  Harvard had to reach in his pocket to wipe the tears that were welling in his eyes.  Soon one of the team (I believe it was Tyree Robinson) produced a jersey and presented Harvard with it. 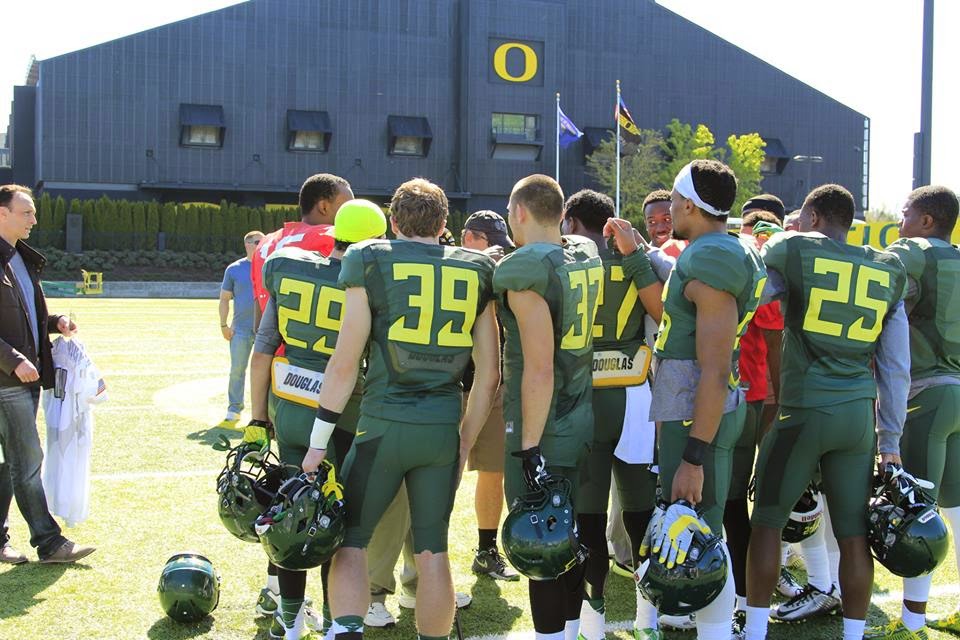 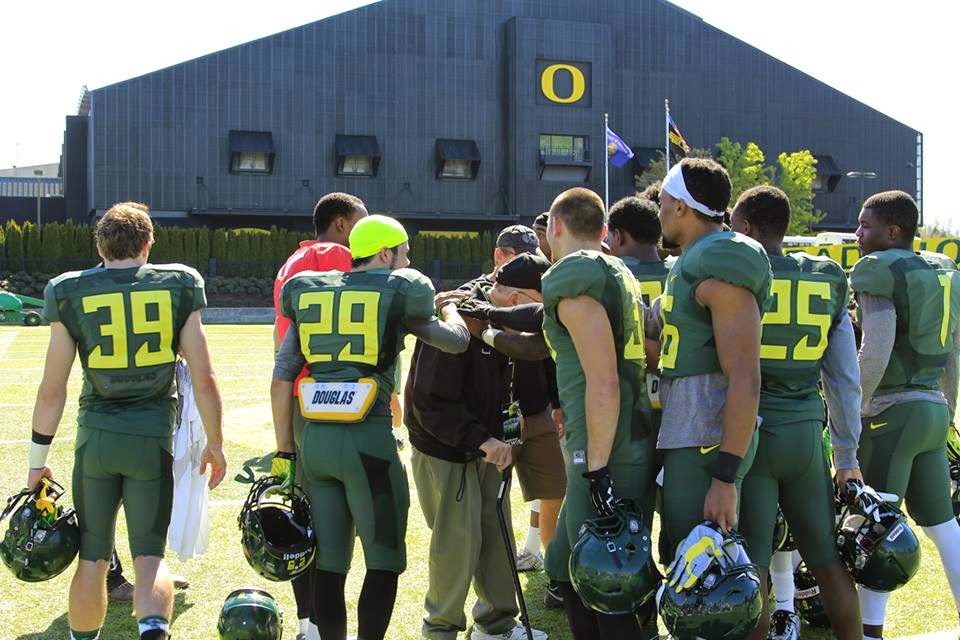 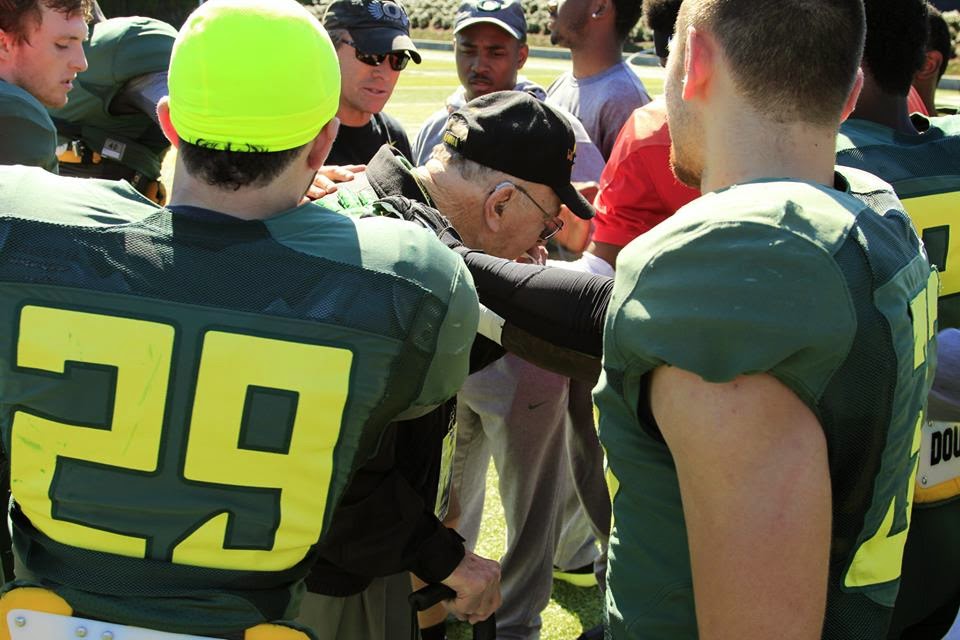 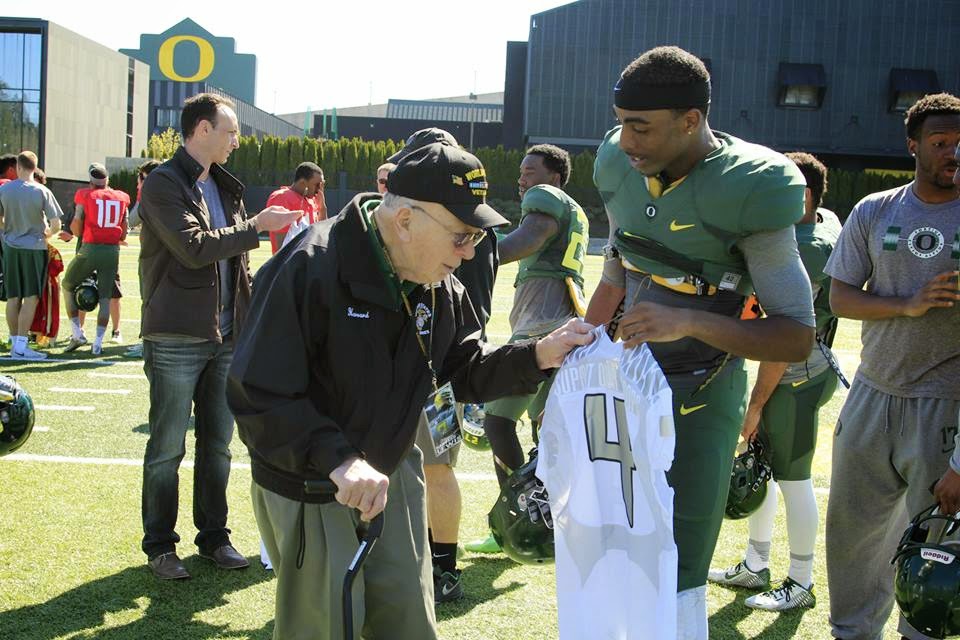 I noticed other teammates doing the same.  Kyle handed a jersey to one of the players and I thought I recognized him.  I asked Kyle who that was and he said Charles Nelson.  Charles was one of their highlight freshmen from the previous year.  As Charles gave his jersey away, I asked him for a picture with him and his honoree. 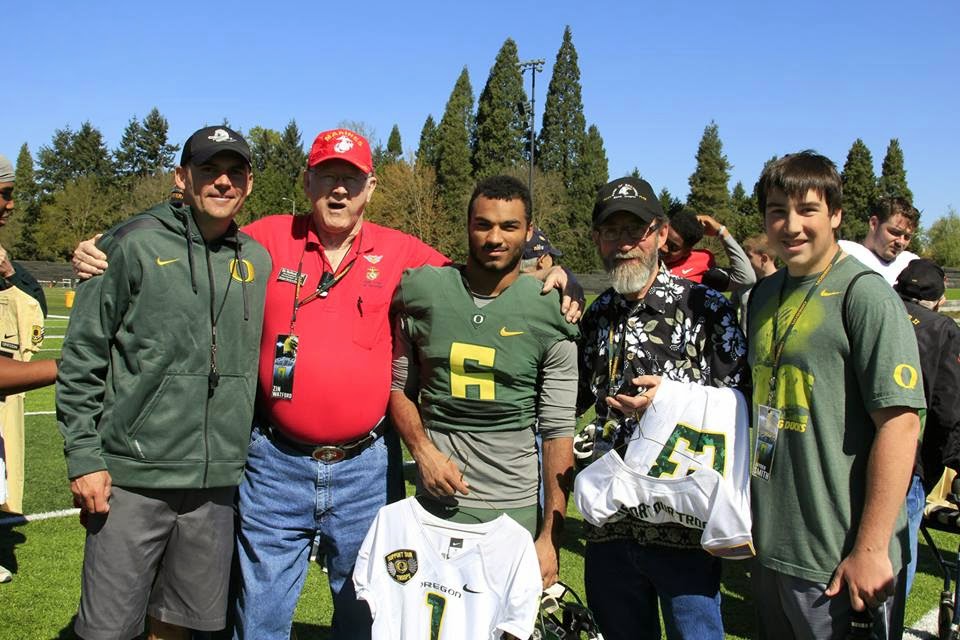 I looked over to see Carrie taking a picture of Jay with another player and came in behind and photo bombed him with Bryon Marshall. 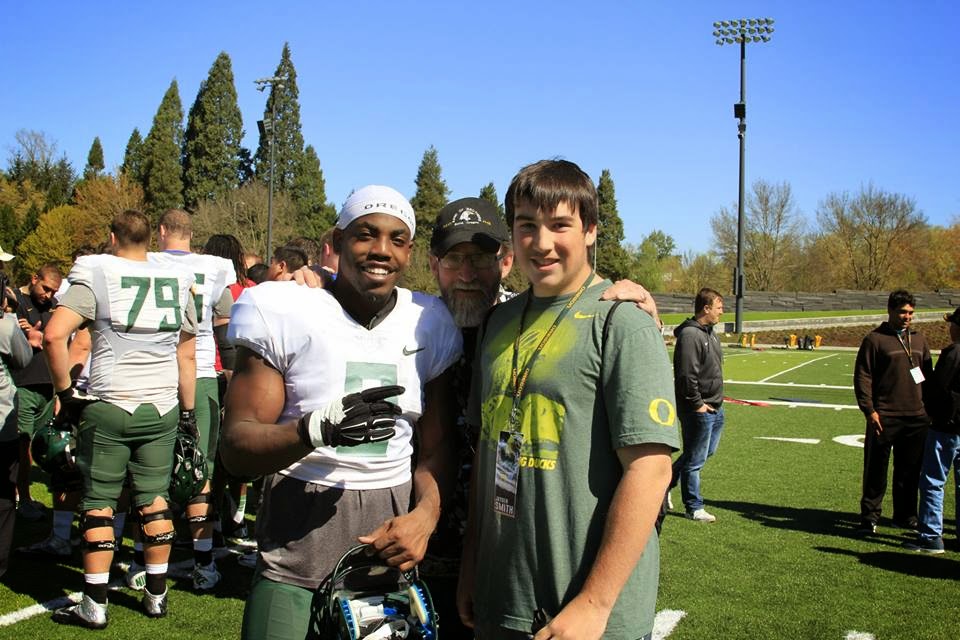 I watched as the guys beamed with their jerseys and the opportunity to spend time with the team that had made it to the national championship and their coaches.  I caught up with my friend, Joe Sharpe who was talking to the Defensive coordinator and asked for a picture with them.  When I turned around, I noticed the two offensive and defensive line anchors, Tyler Johnstone and DeForest Buckner.  Things were happening so fast that all you could do was swim in the moment. 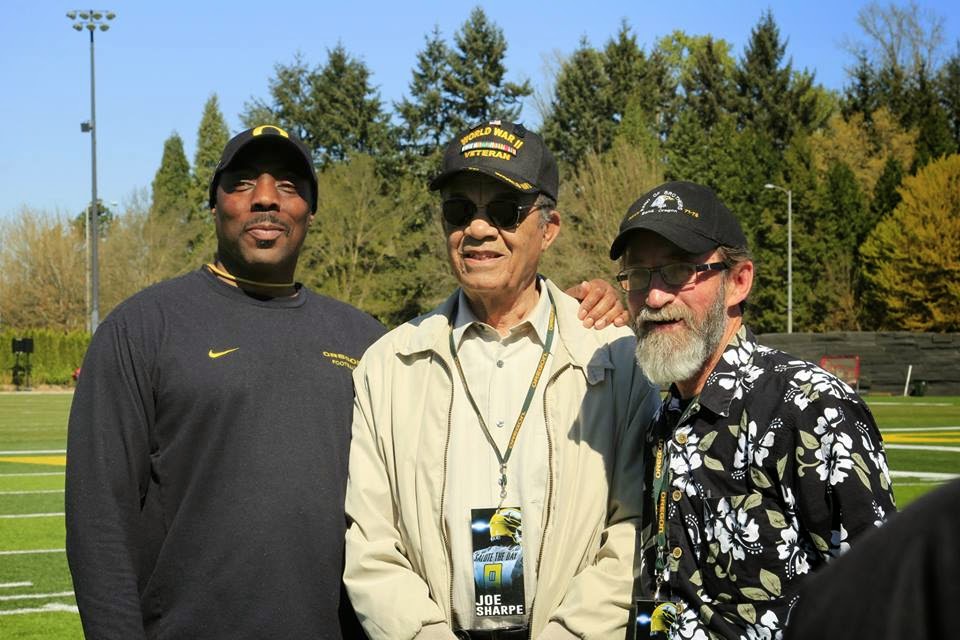 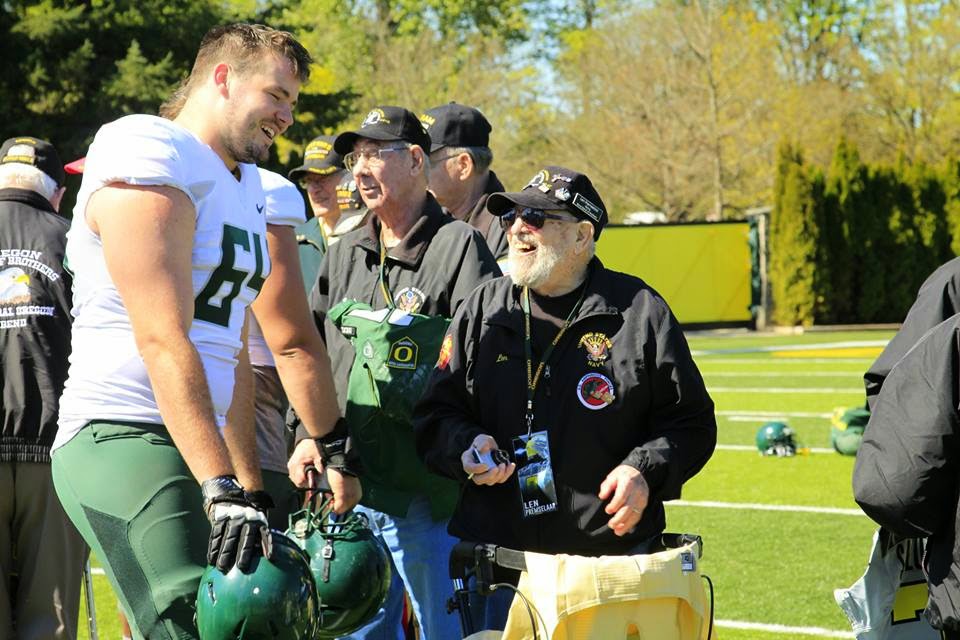 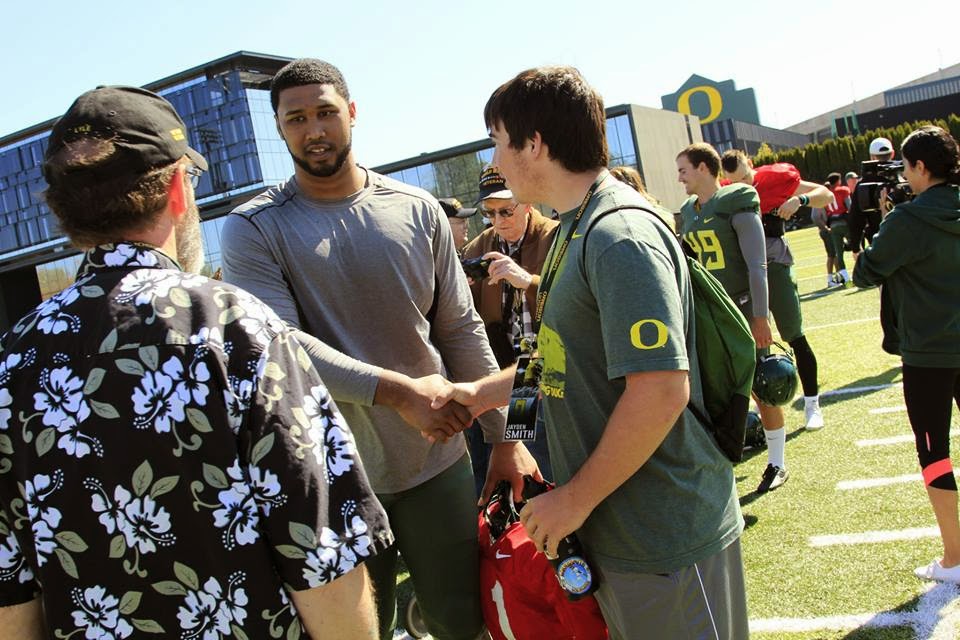 As the team broke up, we took the time to take pictures of some of the guys with their new treasures and some of the players that stayed behind.   And of course, one of their favorite things to do....tell the coach how he should do his job..... 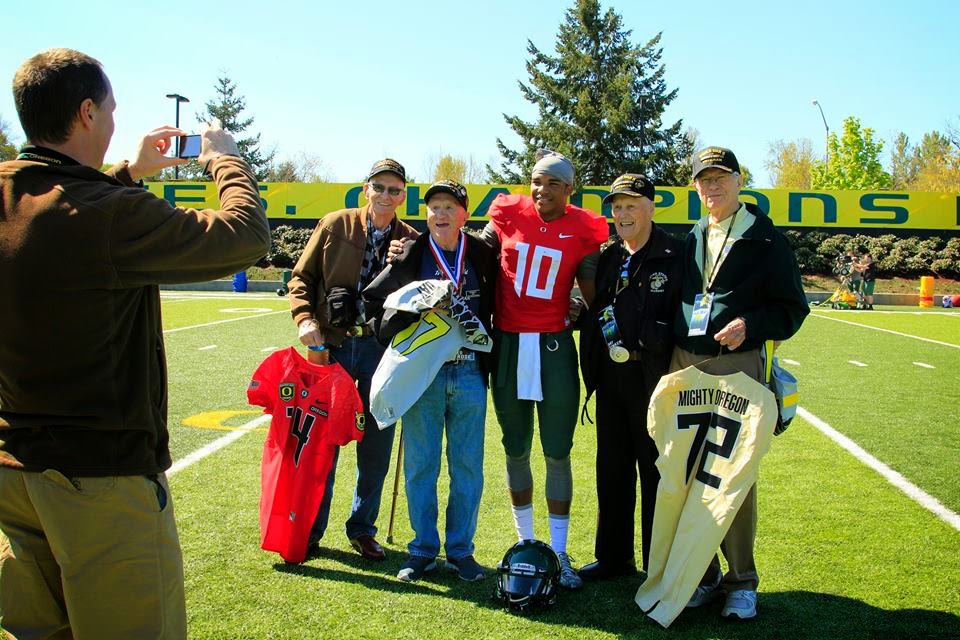 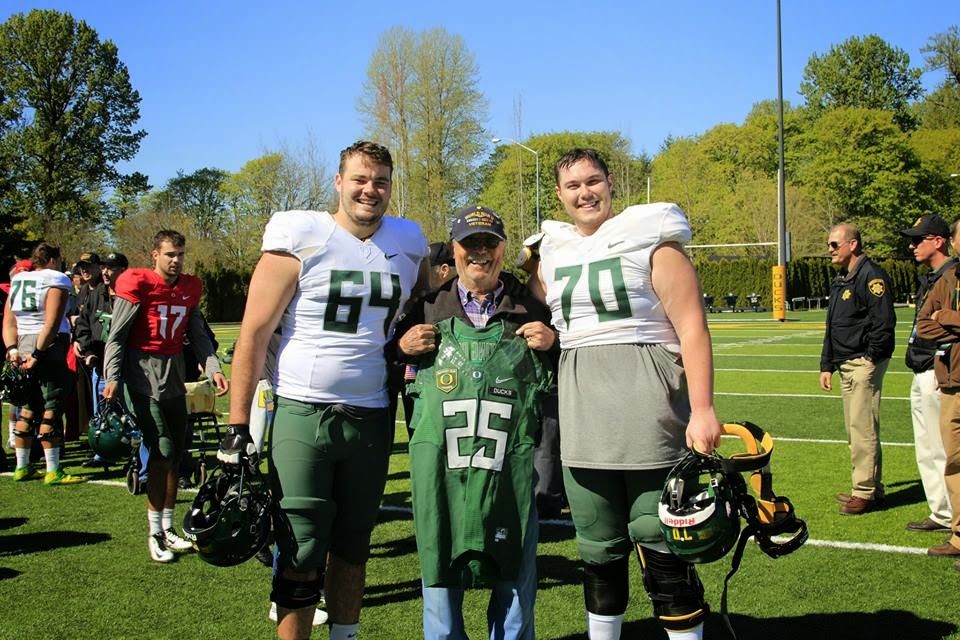 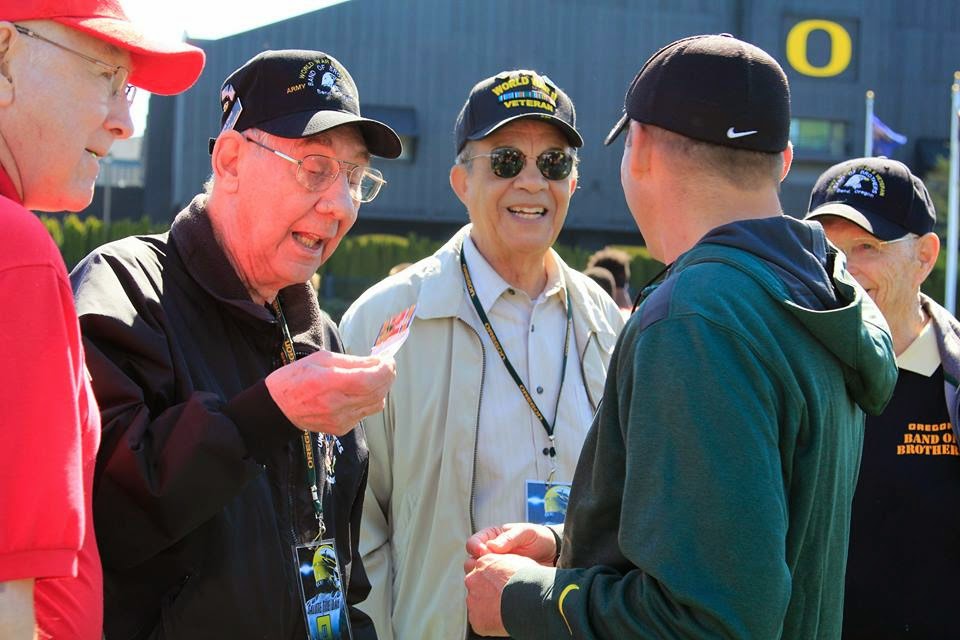 After breaking up, we took a tour of their facility, giving the guys breaks along the way in the auditorium and the players lounge complete with couches made from football leather. 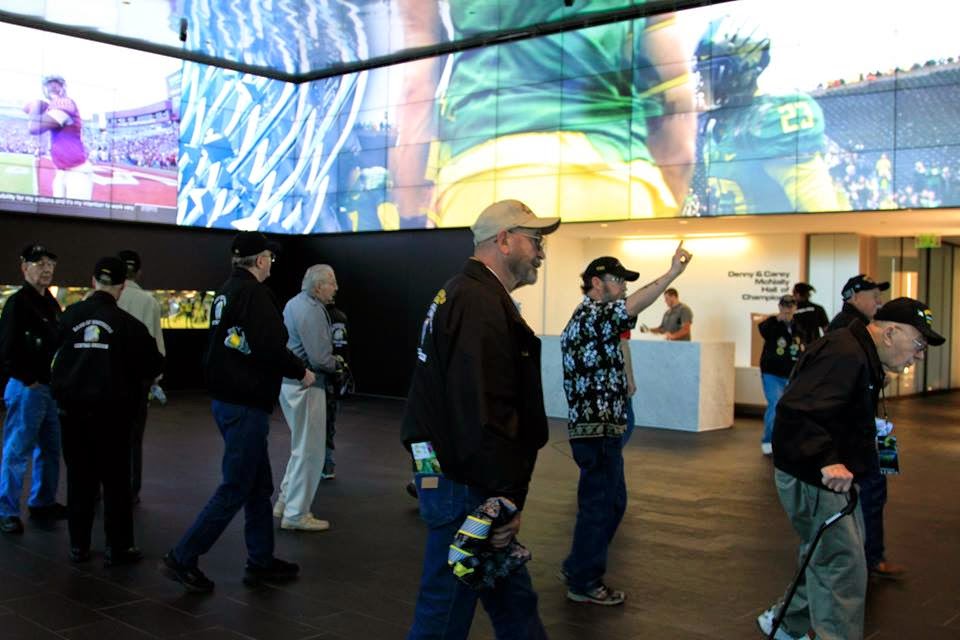 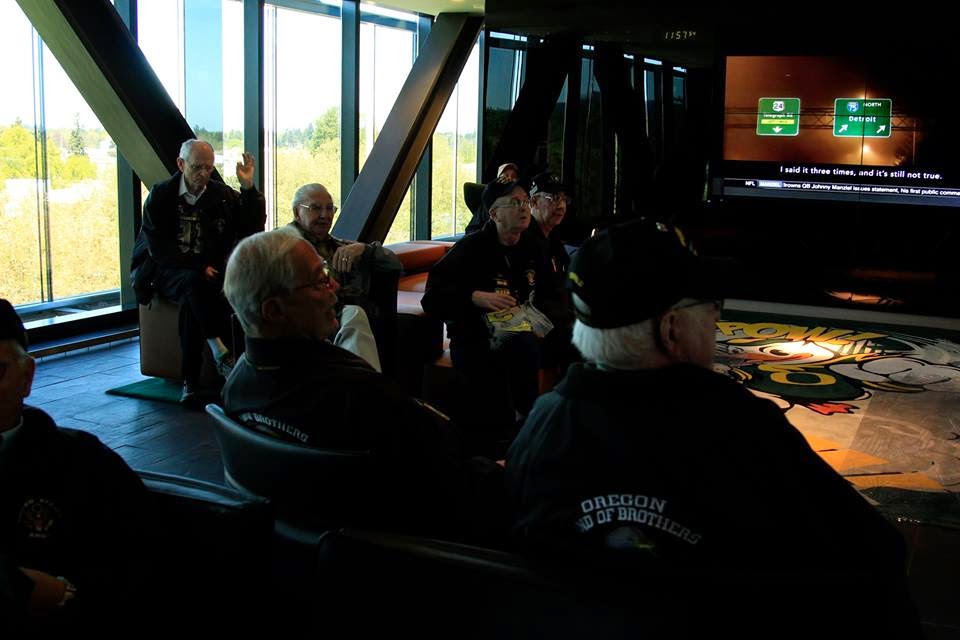 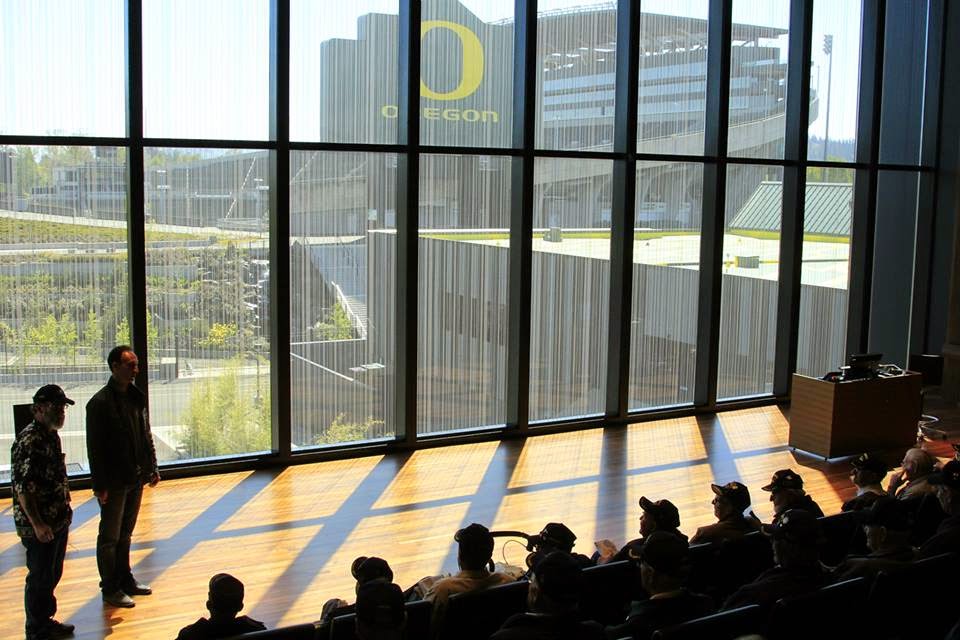 For one last stop, we took them over to Autzen for a photo opportunity on the field. 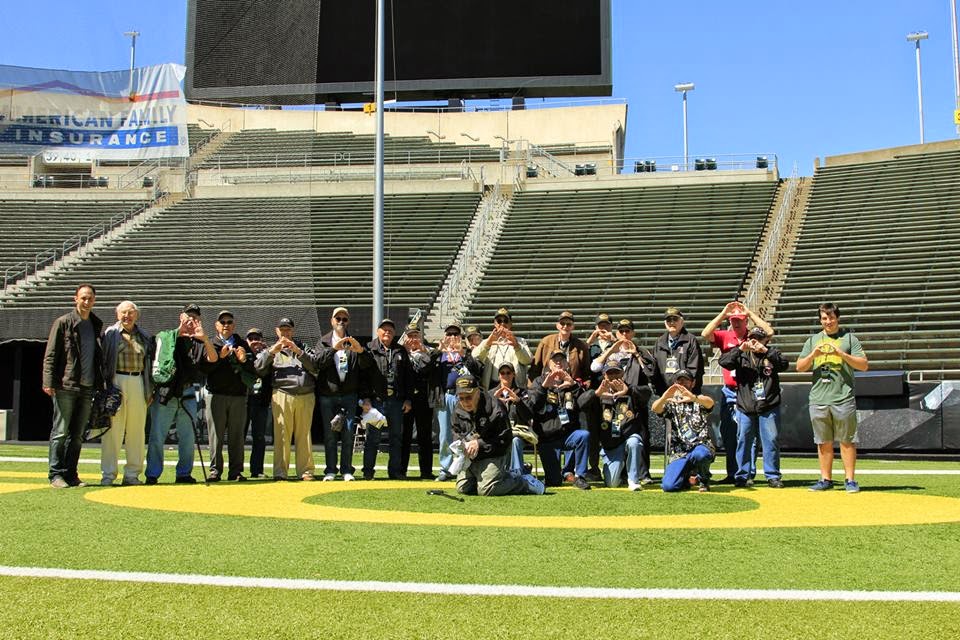 Loading up the buses, Kyle ran inside to get a poster board card that the team had signed for Bob Maxwell who had recently lost his wife.   Once again, the team that we all love was doing something special to encourage. 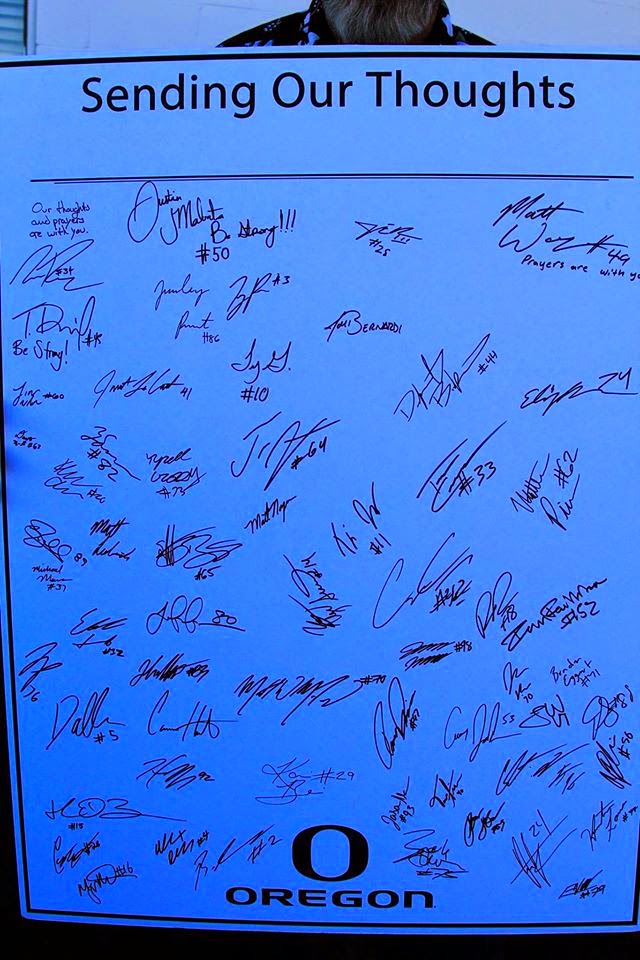 We parted with a "See you next year" and headed out to our lunch stop at the Subway in Springfield.  The Subway there is owned by a man who also owns the "Human Bean" coffee shops in Bend.  He had the guys through in no time and left us with two boxes of cookies for the trip back. 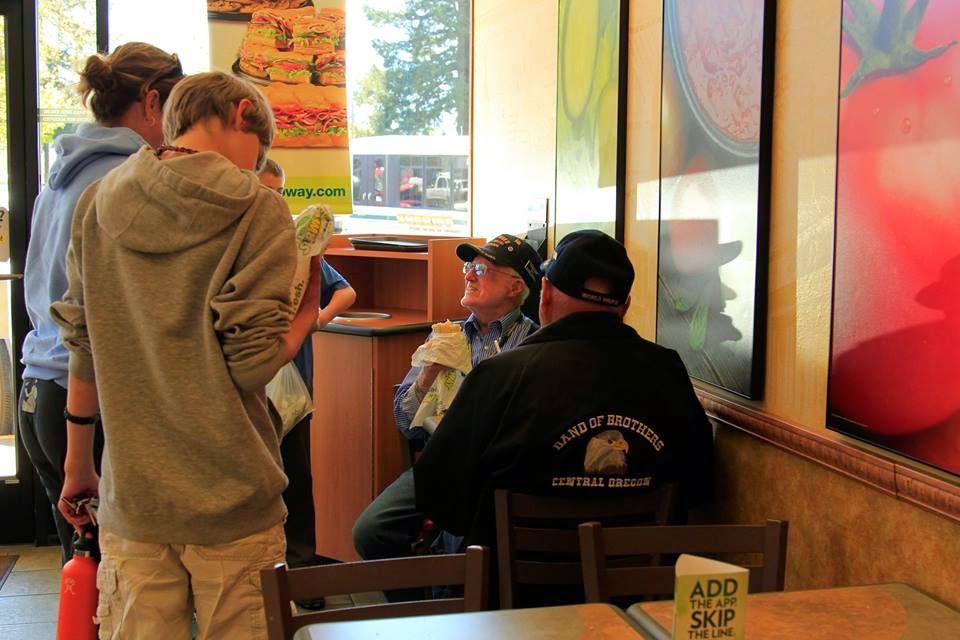 Arriving in Bend around 4 or so, the tired vets were picked up by family members and taken home.

But my day was not finished.  Jay had a Lacrosse game at 6.  Carrie drove him to the game and then we stopped for a quick sandwich which we ate in the stands as the game started.

Jay played great that evening and his team won handily.  On Saturday, they played one of the good teams from Portland that had beat them in the past.  The other team went up quickly 3-0 before Summit took control.  Jay scored the first two goals and assisted the next two ending up with 3 goals and 5 assists.  Summit came from behind to win 13-7.

One of the parents commented on Jay's play.