The evacuation of South Vietnam 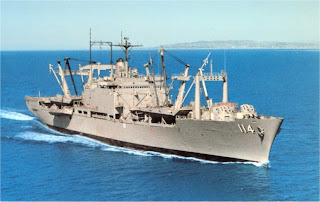 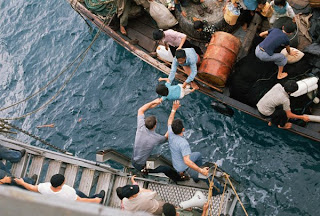 A while back, the man who bought my old house found some papers in the attic including a letter that I had written to my family at the end of the Vietnam war. It included something that I had written that showed my thoughts at the time. After showing this to a few friends, many of them suggested that I rewrite it in my blog so here goes. I will not edit anything which becomes more evident towards the end of the article when many errors were made.

One Man's Look at the Evacuation of South Vietnam

Being on the only naval combat ship to actually transport South Vietnamese refugees to safe haven, I had the chance to experience and participate in one of the greatest humanitarian efforts in recent years, one of which I really don't believe the people of the US actually realised the tragedy of.

I will try to relate to you my actual feelings of what I saw aboard my ship (The USS Durham LKA-114) and also information of what happened on other ships involved.

The first day was April, 3rd, 1975. The ship was maneuvering off the coast of Phan Rang, RVN, expecting refugees but not actually knowing how we would receive them since we could not send our boats into the city.
A small boat approached the ship about 1 PM and we were given permission from our flagship to commence receiving evacuees. We took aboard 21 persons off of the first craft, a very small number compared to what was soon to come.

The ship maneuvered to a little over a mile from the coast and anchored. Very soon more and more boats began ferrying people from the war torn city and fights broke out between them to see who would get to the Durham's brow and safety first.

Fellow shipmates formed a human chain carrying small children and personal belonging from the boats to the top of the ladder where the people were given a quick security check by US Marine military police. Sailors and Marines then helped them with their belongings as they were taken to a food distribution center for rice, bread, and tea then on to one of the cargo holds where they and their families could rest. US Navy hospital corpsmen then inspected the people and worked around the clock treating evacuees who needed their attention.

Meanwhile back at the brow, the receiving of evacuees continued in what to me created a very heart touching and desperate picture. Two of the evacuees fell into the choppy seas trying to jump to the safety of the ship and were rescued by sailors who jumped into the sea after them.

By the end of the first day, the total came to 1400 refugees, including one small baby that was born on the way to the ship.

The ship then returned to the open sea promising to return for more in the morning.

That night, sailors that were not on watch worked through the night, giving up there much needed sleep in order to make the people as comfortable as possible. The language gap was bridged by the love and concern that the sailors put out to the people. Many sailors gave up their own blankets, sheets, pillows, and coats in order to make the refugees as comfortable as possible. Blowers were rigged up to cool off the heat and many men used paper plates to fan small children so they could get to sleep while other men made milk runs to the ships galley for milk for the babies.

At this time, my heart really went out to these people. I could see the mortar shelling of the beaches and the smoke from the fires in the city. I could also see the anguish, pained, and terrified looks on the faces of the refugees.

Early the morning of the 4th, my ship returned and anchored one again off of Phan Rang. Immediately, the scene was the same as before and the men of the Durham began another day of little or no rest.

Even a steady monsoon downpour did not stop the growing numbers of refugees waiting to be brought aboard. Reports from the refugees were that there were still thousands on the beach waiting to be brought aboard and that many people were being shot trying to escape the Viet Cong. Reports were that in a northern harbor, a communist tank had even parked itself in front of one of the piers that the refugees loaded on threatening to kill anyone trying to leave.

On the ship, the men of the Durham worked in the pouring rain keeping families together and finding more room for the increasing numbers. Extra makeshift toilets were built along the sides of the ship. In order to maintain order, Marine guards were placed on holds and refugees were not allowed out unguarded. Many men immediately volunteered themselves as escorts to escort the people to places where they could relieve themselves and where they could clean up.

At the end of the day, the official total came to 3586 refugees, most of them women and children. The second night the men that could, worked again through the night aiding the people which could not easily be accomplished since there were 2000 more refugees than the day before. Feeding went on around the clock.

That evening the ship got underway heading south. In the morning, we arrived at Vung Tao where we mad ready to transfer our guests to the US merchant ship Transcolorado. Once again the men of the Durham helped the people get all there possessions together and make ready for the transfer. Feeding was still trying to be accomplished and was turning into a real task. When food was brought to the people, they rushed and fought to get it first. Order was maintained when they were told they would have to line up for the their food or get none at all.

Once again, Sailors formed human chains on both Durham's browns to aid the people onto the Durham's boats and even more men formed yet another chain on the brow of the Transcolorado.
On the evening of the 5th, the transfer of the refugees was completed and the Marines and Sailors of the Durham took a much needed rest.

On other ships, the job was not quite as easy as on ours. Two ships, one merchant and the other a Navy ship ran by civilians were hijacked by South Vietnamese military, when they found the ships were taking them to Phuc Quac island, a small island in the Gulf of Thailand that had been designated by the Saigon government as the place to take refugees since everywhere else was too crowded. Many of these military people were deserters who left their posts when the Communist offensive got to close to them.

In order to keep the refugees from starving to death, the US Navy rushed food to the people. They also set up Marine detachments on some of the ships to keep order. But this did not stop the treachery of the South Vietnamese military. When the Marines backs were turned, they stole food from the people. Some of them even cut a hole in the fresh water hose line bring water to the place where it was being distributed and sold the water at black market prices. Quite a few people got so desperate that they began ripping boards off from different places on the ship and using them as rafts to swim to shore. Twenty or thirty of these people were shot in cold blood by the South Vietnamese gunboats stationed in the area.

By the time this article is finished, their government might have already fallen. At first, I thought that it was our fault that these people are in this plight, but after seeing what I saw, I realized it was no one faults but their own. How can you help someone that doesn't want to help themselves.

A friend of mine talked with one of the soldiers on our ship and asked him why they weren't fighting back. His return was that the US did not give them enough fuel and ammunition. I don't know about the fuel, but we confiscated enough ammunition, rifles, and grenades from the soldiers who boarded the ship (some that we found later to be deserters) to supply a considerable larger group of soldiers than that which boarded us.

Now, I am not writing this to make any comments on the right or wrong way to handle this situation in Vietnam. My only purpose is to let people know what one man saw.
Posted by diner life at 8:49 AM

Your article impresses me very much by your effort in saving people lives and many years to come.

The second part of the article is true too, but, there are many factors that we need to present as well.

I am maintaining this site www.pulaubidong.org and would like to "copy" and "present" your first part of the article to the 1975 section.

May I have your permission?

Yes, Lamvi, I would give you that permission. I also understand your reasons regarding the second part of the article.

Two things. The first part is first hand and much of the second part was from reports. It also has the feelings of a man (me) in his early 20's struggling with what was going on around me.

Many things have happened since that time and I struggled with posting the article in it's fullness but decided that it was best that I did.

Thank you for sharing. I was a Plankowner on the USS Durham LKA 114, serving as a member of the ships company from 12/68 to 12/70. I was a Coxswain in Boat Group 3rd Division.

We will be having our 3rd Durham Reunion in San Diego in 2012. The first was in Durham NC over the 40th anniversary of her commissioning in May 2009, the second was in St. Louis MO in 2010.

There were many members of the ships company from your time aboard in attendance including the US Marine Officer attached to the ship who shared many pictures and stories on this same subject.

I hope you will be able to join us and make the Durham's 3rd reunion next year.

The Durham also had a company of Marines aboard for security, Alpha Co. 1st BN 4th Marines, commanded by Capt. Ernie Brown. I was a Navy LT dental offcer and was the dentist for 1-4. I was technically in charge of a detachment of corpsmen from the Battalion Aid Sration. We assisted the ship's doctor, LT Hans Sachse, in taking care of the 3500 refugees, basically cleaning up minor wounds. HM-1 Hraba basically ran the after battle dressing station of DURHAM. I will never forget eating dinner with clean white tablecloths - a fabulous tex-mex meal, then descending into that mob of refugees. A great, friendly ship.
Dr. Griffin T. Murphey, Fort Worth, TEXAS