Golfing with Frank and Ron.....and Bill 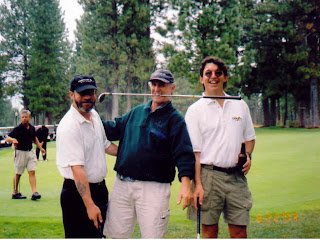 A few weeks back, I wrote about my experience at an Alice Cooper concert. That experience was talked about the next morning on air at the Twins by my old friend, Ron Alvarez. It got me thinking of a previous adventure that we had shared a few years back.

Let me preface this with how Ron and I first met and how important that meeting was to the development of Jake's Diner.

When Jake's first opened, I told Jake that we could not fill it with truckers alone. We just had too many seats. He gave me a budget to work with and I began developing a marketing plan for the diner. One of the arms of that plan was radio. I wanted an ad that was different. I was looking for something that would stand out and that would stick in the listeners mind. So, I listened to the ads that were presently out. The one that I was most impressed with was the 'Doctor Al and Doctor Bob' commercial for Bend Heating. I looked for the developer of that ad and was directed to Ron who was then working for the new KNLR radio.

I went to KNLR to meet with Ron and we discovered that we went to the same church. Ron was doing the soup kitchen for the church at the time so in order for us to talk and work on the development of our ads, he asked me if I would like to run the kitchen with him. Ron would run the kitchen part and I would run the floor.

My youngest daughter, Trinity, was around five or so and quite a talker. She had asked if she could work with me so she began joining me at the kitchen. Ron and I were standing in the kitchen talking when Trinity came barging in rambling on about something that had just happened out on the floor. Ron and I looked at one another and I think we might have had the same thought at the same time. "What do you think?", I asked him. "Bring her in to the studio and lets see.", he returned. By this time, Ron had moved on to the newly formed KQAK.

This began the sequence of ads that ran for years and became one of the foundations for the development of the diner. Ron played the voice of the old man and Trinity was the talkative and sometimes annoying little girl. Those ads lasted for quite a few years until Trin's voice began to change and they no longer had the same effect. And as the ads developed so did my relationship with Ron. To this day, Ron produces every radio ad that I have.

That being said, a few years back, I tried to get Ron to join me in the yearly Combined Communications golf tourney. Ron had never golfed before but was willing to try anything once. The tourney that year was postponed because of a storm and so the radio station allowed us to golf on our own later on in the season. So, Ron met me and my buddy, Frank Patka out at Widgy Creek one October afternoon for Ron's first and last golfing experience.

We started off and soon realized that since it was Ron's first time and also because Frank and I are not the best golfers, we needed to do a best ball type of round. We actually kept up pretty well until I believe the 10th hole. As we putted, the ball dropped behind the green and I told the guys that it was time that we pulled over and let the group behind us hit through.

We sat in our carts at the beginning of the short 11th hole and waited. Two carts soon arrived. The second cart had a very tall black man sitting in it. "That is Bill Russell.", I whispered over to Frank and Ron in the other cart. "No, we think that it is Danny Glover.", came the answer. We argued back and forth as the other group began to set up to drive. Bill is a lefty so he had his back to us as he began his preparation. Just as he was beginning his back swing, Frank belted out, "Excuse me, are you Bill Russell?". Bill dropped his club and turned. "Yes.", was the reply and we watched in awe, almost dumb struck as he made his drive. He actually muffed his first hit quite possibly from our interruption so his partner gave him a mulligan and his next was much better. We all got to shake his hand and wish him well and I secretly kicked myself for having not brought my camera that day (the shot here was from the tourney that was cancelled).

As we made our shots and went down to the green, Ron found a marker close to where Bill's ball had hit. "I have Bill Russell's ball marker.", he announced. On the next hole, I found a tee sitting in front of a fresh divot that only a lefty could have made. "I have Bill Russell's tee.", I announced. Not to be left out, Frank reached down and picked something up off of the grass. "Wasn't Bill chewing gum?", he asked.

Just as the Alice Cooper experience, the next morning the story became fodder for Ron's popular morning show. To the best of my knowledge, Ron has never swung a club since but has quite a story to go along with his only experience.
Posted by diner life at 3:31 AM

When I cite a perfect radio campaign, I always use the "Dr. Al and Dr. Bob (Boob)" spots. You could listen to those over and over and still chuckle. Only the old-timers know what I'm talking about. Yeah, that Alvarez is pure genius.