World Series of Holdem for Habitat 2008 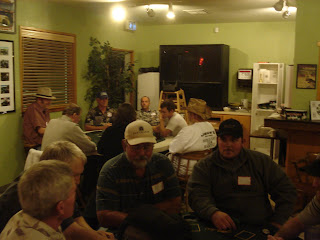 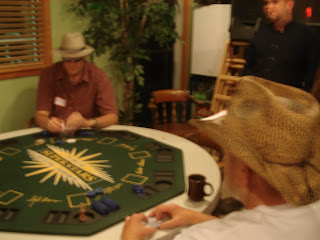 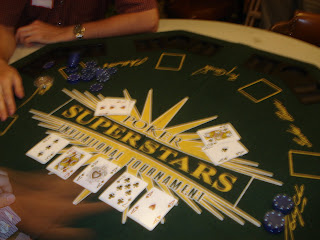 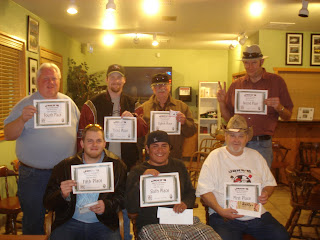 Last night was the big night of the year for our Holdem for Habitat here at Jake's. We call it the World Series of Holdem for Habitat. There were three ways to qualify for this big tourney. 1. Be a winner of one of our weekly tournaments (held every Monday night), 2. Be in the top five in points for those same tournaments (you get points if you make the final tables), or 3. qualify on the "last ditch qualify night" on the day before the event.

I have been sick before the event so I wasn't able to put as much into it as I had hoped for but with the help of friends, set up in the afternoon to make ready for the event. Thanks to the help of various businesses around us including Printer Resources, Shell Stop & Go, Lava Lanes, Regal Cinemas, and Kings Razor, we had plenty of final table prizes. My trip to the coast has garnered the main prize of two nights at the Sandcastle Motel, a Marine Discovery Tour, and meals at the Chinook Winds Casino. All together, we figured that we had nearly $1000 worth of prizes.

With Frank and Richard's help, we were ready to go and around 5:30, the combatants came rolling in. Richard took control of the prizes while Frank and I spread out the players on the tables. Shortly after 6:30 and a couple of announcements, we all sat down and began.

An hour later, I was done. I was the victim of a slow play. A slow play is when someone bluffs that they don't have a hand, stays with your bets, and in the end takes you out with their better hand. Slow plays can backfire but this one did not and my chip stack was gone. A hand later, so was I.

I spent the rest of the night sorting out tables and waiting for the final one and the presenting of the prizes for it. Chris, the Monkey man, showed up in a rather cool fedora with shades ready to make his move. Last year, Chris had been third and as the final table approached, he was one of the two players that I felt had the best chance of winning. Bob Head was at the final table also with quite a stack of chips but for some reason I felt his chances were slimmer mainly because he had won so many times (13 in the last two years). You see, skill is a smaller part of this game with luck being the greatest component.

The final two ended up being Bob and Chris. I was behind Bob and saw his Ace Queen. In my mind, I was screaming to Chris to not call but evidently he is not a mind reader and he did. The dealer slowly put out the flop. First a 3 doubling up Chris, then a queen giving him two pairs, and finally another ace giving them both two pairs with Bobs higher. The up and down of it all was causing yells and "wows" from all around the room and I wondered how Chris was enjoying the roller coaster of it all. Finally, on the river, Bob was secured with another ace, giving him a full house.

The game ended another successful year of Holdem for Habitat at Jake's. Next week we start a whole new series. We are nearly over $14,000 raised and should hit that on Monday. Thank you to all who competed and helped and for anyone interested in a "fun" hand of poker, join us any Monday night at 6:30.

Last year, Chris said that I should have used a flash for my pics so this year I did. Next year, however, I think I need to get a new camera.
Posted by diner life at 6:09 PM

Dang Lyle, if only I had tried reading your mind instead of Bob's. I know he likes to play junk hands, so I thought he might have been pushing with nothing, so it was a rather risky all-in call.

I loved the drama with how Kevin turned over one card at a time with the flop, truly a great roller-coaster ride to the finish. That's how these things should always end.

I know it's not just about the prizes, but last year the final table got to pick the prizes they wanted, down from the top. I'm not griping, It's just I needed another printer like I need high-heel shoes. ;)

Yep, maybe a time to upgrade the camera. I actually thought about bringing my photo gear to shoot the event, but I knew I'd be playing instead of taking photos. Hmmmm.. based on your tourney's you seem to do more photos than playing, so UPGRADE! ;)

Thanks again for the great event.

Sorry about the prize thing, Chris. I turned a few things over those last few days as I wasn't well and I felt real bad when I found out that you had won another printer.

Come see me and I will make it up to you with a few meals.

And you would have to rub it in about not winning for a while. Hey, Moneymaker and Ramer were knocked out on the first day of the World Series this year so I dont feel too bad. I cant wait to play Bill again, however, as I think I can take him next time.

I think my camera has been in my pocket too much. Most of the pics were totally unusable. The only one that was even fair was the one of all of the winners.

Anyways, Congrats Chris. Cya back at the tables.