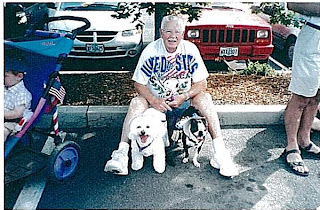 I said goodbye to an old friend today.

The first time that I met Mike Dolan, he was having coffee with a bunch of guys from his neighborhood in the back room of the diner. I was wearing my Deschutes Rocks coat from the local boxing club that we support. Mike told me then that he used to box. As a matter of fact, he once boxed Jack Dempsey.

I came to really enjoy talking to Mike. I found him to be a very strong but very caring man. I didn't find out till later that he was the one that started the local Veterans day parade by walking down the middle of Wall St with a flag in his hand.

He fast became one of Judy's favorites with the chant of "Judy, Judy, Judy" when she would come into the room. The guys would all throw in a dollar into the tip bucket each week. Mike threw in two. One of the guys chided him for it and he said that it was his decision and non of the other guys business. Mike did things the way Mike felt that they should be done not necessarily the status quo.

I remember the last Veterans day parade that Mike was in. He was riding in his cart and before the parade stopped by to say Hi. I introduced him to my father who was riding in my car. Since they were both WWII Navy, they talked for quite a long time. Dad came away very impressed and with immediate admiration for Mike.

During Mike's sickness, Judy and I often wondered how he was doing but were always told that we should not bother Dottie (Mike's wife) as it was hard enough on her as it was.

When Mike passed away, we immediately got our heads together and Rabbine Harpell worked hard to get a banner made and the parade was officially called the Mike Dolan Commemorative Veterans Day Parade. The banner was awesome and when they showed it to me, I called over Judy to see. The tears welled in her eyes as she saw the banner with her old friend on it.

The funeral was today. Judy and I drove over and walked in to the graveyard service. Great words were said by Jack Sherman, Mike Ward, and Mike Dolan's two brothers. Then, Jack and seven other vets gave Mike a twenty one gun salute and then came the hardest part....Taps. I can't remember a funeral that drained me as much as this one.

Judy and I went back to the diner afterwards but neither of us felt up to working so we took the afternoon off. After supper, we talked again about the day, the funeral, and our old friend.

Goodbye Mike. Along with many others, we will miss you.
Posted by diner life at 8:59 PM

I'm sorry for your loss.

Thank you for sharing a very poignant part of your life.

Thanks Kina. Unfortunately, Part two is Saturday. The Marine's service is then. The logger is in hospice and I am not sure of the Truck driver's status.

Thank you for your beautiful post regarding my grandfather's funeral. I welled up with tears once again at our family's huge loss. We were so pleased with the overwhelming support that day. It's comforting to know how well-loved and respected he was in this community. I appreciate your kind words.

Thanks Lisa. He is one of those guys that I will never forget. I know that you will all be there for Dottie in this very hard time of her life.