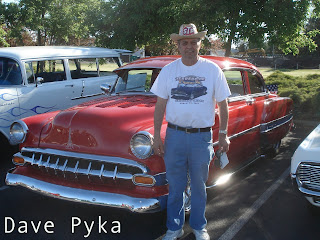 Three days later and I said goodbye to another friend, Dave Pyka.

Dave was one of the Band of Brothers who meet at the diner on Mondays. At first, Dave thought that I had been a Marine like him. When I informed him that I was Navy, he said, "I'm sorry!".

Dave then asked me where my Navy cap was and I told him that I didn't have one but always intended to get one. Dave said, "Don't, I will buy you one.". I really thought he was joking but next week, there he was with a Navy cap waiting for me.

He asked me to try it on and it fit real well. Then he said, "Look up.". When I did, I noticed something under the bill. Taking it off, I found a Marine Corp sticker under the bill. "Now, every time you look up, you will see the Marines!", Dave announced laughing.

I placed the hat in my office so that I could wear it when the brothers came in for lunch and the sticker feel off and down on my desk. Somehow, it got lost or stuck on something else.

So, when I found out that Dave had passed on, I went down to the military store and walked up to the counter and asked for a Marine sticker. The man got me one down and I told him that I was going to put it under the bill of my cap. He looked up and said, "Is it a Navy cap?". I said yes and told him Dave's story. "I sold him that cap and sticker!", he announced, "That guy was quite a character.". "Yes, he was.", I agreed.

I have placed that sticker back under my bill where it belongs. It will always remain there even if I have to stitch it in.

And when I look up, I will always see a Marine and my friend, Dave Pyka.

On a lighter side, Dave's great granddaughter, Rachele, was in my grandson, Jayden's pre school class years ago. It was right about the time that Cold Stone Creamery came to town and I took Jay over to get some ice cream. Jay got his and found us a seat. When I arrived with my ice cream, I found Rachele sitting next to Jay and watching him eat. Rachele's mom told her that it was time to go so Rachele said, "Good bye Jayden!" and kissed him on the cheek. Jay just sat there eating his ice cream. "Wow, who was that?", I asked him. Without looking up from his treat, he said, "My girlfriend.", and then kept on eating.
Posted by diner life at 12:37 PM

Lyle,
I am so sorry to hear about Dave. Dave was the sweetest guy, he always gave me my Monday hug as he called it :) he would say now get over here and get your Monday hug young lady :) he will be missed.

I used to work at Hughe's Aircraft
in Fullerton with Dave and some other great friends I lost contact with them after retiring.
I was so sorry about Dave passing on. What was the nature of his passing? Was it illness? I would like to inform the other mutual friends.
Rae

Dave had cancer. His smile and great personality stayed on all the way and still remains with alot of people here.