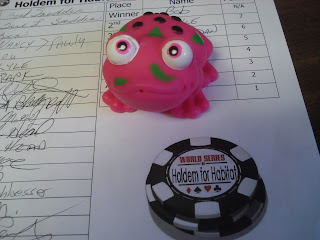 Second place again for the second week in a row. We started with three full tables of dedicated players. It is a bit overwhelming to think of it but last week, we went over the $18,000 mark and I don't see any letting up in the near future.

The pink frog has been my good luck charm for the last two weeks. Three weeks ago, I started playing with it and I was the first one out. A couple that have joined us recently, John and Mindy joked about my frog so I told them it was coming back strong the next week. So that is what brought me to using it again for the last two weeks.

A kiss of the frog seems to be a kiss of death. Everyone who has attempted this feat for the last two weeks has been taken out by me. Frank decided to defy the odds tonight and boldly gave the pink frog a kiss. A few hands later and I took him out, giving me a healthy stack of chips for the final table.

Choosing your marker wisely, I realize, does not guarantee you a win but it is does make the game a bit more fun. I look around the table and see silver coins, dogs, bears, pirates, and many other odd and unusual markers. I actually have quite a few that I enjoy using and Jayden, my grandson is always looking for more for me.

Each week, we inch closer and closer to our big game of the year. The World Series of Holdem for Habitat which is to on the first Monday and Tuesday of October. We have yet to secure the prizes but I am sure we will be able to get what we have had the last two years, a trip to the Oregon Coast.

You still have a chance to qualify in the next few weeks or one last time on the first night of the big event where every table is a final table and the highest place player who has not qualified will then qualify for Tuesday night and the Main event. You can join us any Monday night at 6:30 PM in the back room at Jake's.
Posted by diner life at 10:26 PM

I fear no frog! Looks like I have another month or so to figure our my Phil Helmulth-esque entrance for this years World Series of Jakes. ;)

I might need to sneak in before then as well. I need my all-in fix.

Sneak in before, my friend, but remember

When I kissed the frog, I diluted it's power, and that's why I won my first hand......however, I should have slobbered on it before the first hand on the final table against you....it regained it's strength. Next time, watch out froggie, you are going to be served at Jakes as Frank's Delight -- Frog Leg's Guac Style.