A hike along the river 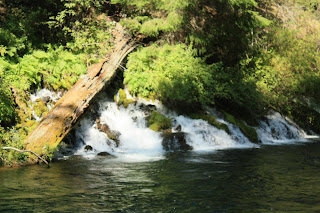 We got a bit of a late start this morning but got away with nine of us in all. We drove out to a small campground along the Metolius for the start and realized the heat before we even took a foot down the trail. I positioned my self in the middle because there were young people in both the front and rear groups and with the river as rapid as it was, I wanted to be in the right spot in case of any emergency.
But, as we walked the dynamics of the group changed as the river did itself. The views along the river were quite stunning and with the clear cold water, you could see the bottom of the river most of the way.
Judy, Chris, and Cindy all had nice cameras with them and were stopping quite often to take pictures of the beauty of the river. Knowing that the hike was fairly long (2.8 miles), I decided that my best place to be was up front keeping the pace going along the way. The two boys, Jayden and Darien stayed up with me with Andrea, Cindy, Crystal and her young daughter, Chloe in the middle. Judy and Chris kept up the rear as they stopped for pics quite often.
I enjoyed the banter of the two boys as they imagined all sorts of animals around us. "Papa, I think I saw a rattler in the bushes back there. The bush moved and made a strange sound.". They both spoke with much knowledge of different snakes, lizards, squirrels,and a variety of bugs. As we approached the fish hatchery, they both could not hold on any longer and ran off into the outlining trees for a bit of relief. As Jay came back to the path, he announced that their was a lot of poison Ivy around. He showed Darien how to tell if the plant was poison ivy or not. Of course, I don't really believe their was any such plant there but I was not about to dispute these bright young minds. 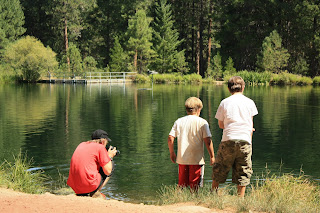 We arrived at the hatchery and found a nice shaded table to eat our lunch together right next to the pond with all of the big fish in it and I enjoyed Chloe's eyes as she spied the large trout in the pond. We all ate our meals and I thoroughly enjoyed my peanut butter and jelly sandwich along with some jerky and trail mix. The kids finished early and took some quarters over to get fish food to feed the fish.
We decided that it would be smarter if Cindy and I hiked back to get the cars and Judy decided to join us in our hike. So, we said our goodbyes to the group and headed off back down the trail I decided to keep a brisk pace so that we would not be out all day and soon left the two girls way behind. It gave me the ability to take some nice breaks in the shade along the way. On one stop, Judy decided to cool herself off with the cold river. The spot where you step down was loaded with bees. Now, normally, she would be jumping around with bees around like that, but she just stood there ignoring the bees who in turn ignored her. She splashed the cold water on the neck, face, hands, and legs and then stepped back onto the path and off we went again.
The closer we got to the cars, the more my stitches began to ache. I was very happy when I saw the cars coming into view.
We got to the cars and Judy rode with Cindy in her air conditioned car while I put the top down on Judy's convertible. As I drove past the store at Camp Sherman, I thought it a good idea to stop there on the way out for ice cream. The girls had the same exact thought and when we arrived back at the hatchery, were asking the rest how they felt about that. 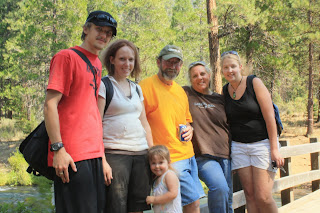 After a few brief stops for photos, we all jumped into the cars and headed back to the store. Making our purchases, we all walked over to the river where years ago, I would take my lunch breaks after delivering candy to that same store for the then Sherfy candy company. I remember feeding the fish the bread from my sandwiches and how fun it was to see them fight over it. Nowadays they have proper fish food as they do at the hatchery and there are no where near as many fish as their used to be. I believe they liked the bread better. 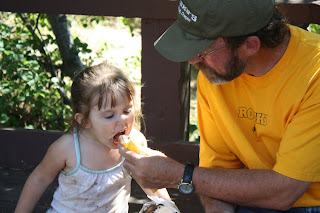 I noticed Chloe who was eating her ice cream sandwich or at least the part that was not running down the front of her shirt, watching me eat my chocolate chip cookie ice cream sandwich. I asked her if she wanted a bite and ended up sharing the rest of mine with this incredibly cute little girl. We all enjoyed her banter throughout the day and sharing my ice cream with her just made my day complete.

Upon arrival back and heading home, there were no arguments in our house as to who got the shower first. I would just have to wait my turn. But, oh, that shower felt so good. After washing off all of the grim, I went back to the diner to insure that steak night was going as planned. I had the cook make me up a turkey wrap for dinner. I have really come to enjoy the turkey, lettuce, tomato, and avocado wrapped up in a flour tortilla and dipped in Cholula Ranch dressing. But upon getting home, I realized that Jay was still there and was planning on spending the night. So the wrap went in the fridge for tomorrow and we went off for pizza.

Now, much later, Judy has gone off to bed, Jay is playing some video games and I am enjoying a couple of scoops of Peach Ice Cream. Normally I don't buy Peach but as I stared at it the other day at Safeway, a young woman and her small bright eyed daughter told me that it was a very good choice so I got it. It has come to be a very special end of the night treat for me.
Posted by diner life at 10:49 PM