The Model A has arrived! 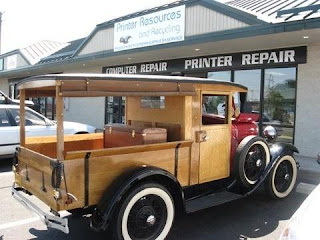 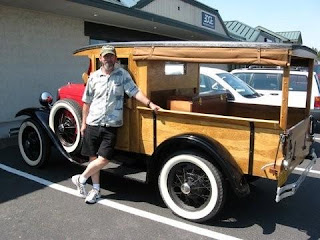 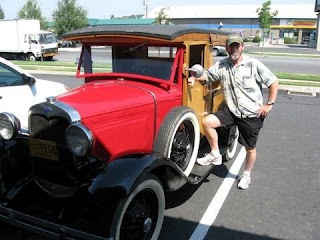 This week has gone by rather fast and now we find ourselves up to a weekend yet again. I don't know about anyone else, but I sure enjoyed the coolness of the day yesterday. It was a very welcome change.
On Wednesday, Judy called me up and asked me to come down quickly as they needed my help. I got dressed as quickly as possible and drove quickly to the diner. The lot did not seem to be that full and I walked into the back door just as Judy was putting up her tickets for the High Desert A's. She told me that the guys in the back wanted to see me. I went back to say my hellos with Speedy and Kip walking across the floor looking rather excited. I don't recall what anyone said but I knew exactly what it all meant. I looked at Speedy and said, "Did you guys bring it this morning.". "Yes", he smiled back. I looked out the window as Judy began to bring the food back and there it was sitting in the line with all of the other rigs.
Now, I am not an excitable man but I was elated. I wanted to go out right then and there and look at it but two things needed to happen first. I needed to help Judy deliver the food and I did not want to go out without Marv who I was buying the car from. It was a very hard twenty minutes or so, but I ate with the guys and we all went outside together.
After talking with Marv for a second, he handed me the keys and told me to take it for a ride. After a couple of pictures, I hoped in with Speedy. "Are you nervous?", he asked. "Yup, I am.", I answered honestly. After showing me the needed dials and things to turn, he instructed me to turn on the key. I did but it did not start....until he instructed me to push the button on the floor of which started the buggy right up. I loved the sound of the engine and had to try out the horn which did not disappoint me at all with its throaty aaoogaa. "Out of the way, boys, we have a first time driver.", yelled Speedy. I must have looked like a schoolkid as I gave the truck some gas and started off across the lot. The first thing I noticed was the stiffness of the steering. It kind of takes two arms when you are going slow. With Jayden in the back, we started around the corner. I went to turn on the turn signals and Speedy laughed. "Those aren't signals, that is the spark in the engine.". I remembered that from his original showing and I put my hand out the window to show my turn. As I raised my hand for a right turn, a lady going the other way thought I was waving at her and waved back. "You better get used to that.", said Speedy, "People will be waving to you allot in this rig.".
Pulling back into the lot, I had made my maiden voyage. I figured that Marv was just showing it to me as it was their ride for the morning but when I went to hand him the keys, he said, "It's your rig now, Lyle.". "Are you sure you want to give it up?", I countered, "And how are you going to get home?". They had already set up a ride and Marv had not ridden with me so he went with me as we took it over to the house.
I made my rounds with my new toy that day, showing it off to my buddy, Frank Patka, who took these pics at his office of which you might notice from the last pic, he insured that his business got in the background. Then Judy and I drove it out to see my folks. They live just south of town but the drive seemed quite long as forty MPH seemed to be a top speed. All along the way, we got smiles, waves, and thumbs ups. As we drove up to my parents house, they were both out on the front porch and we hit the horn as we approached.
After a quick visit, we drove her back on the slower roads to set better with the traffic. I then parked it in the lot along the trees to show her off at the weekly Wednesday night Cruise in. Marv and Speedy along with their wives came in for supper and I joined them at their table before driving my new old car proudly home setting off the horn as I drove out the lot.
Boxing it in with Judy and my car, I called it a night. My plans are to drive it around town, in parades, and hopefully Judy and I can join some of the short trips with the guys from the club.
I am now officially a Model A guy.
Posted by diner life at 6:27 AM

Cool ride. I'll have to keep a lookout for you.

And congrats on your wedding. I thought alot of you last week.

Lyle that's just awesome!! Your one of the boys now!!!! hope you can keep up with that bunch there pretty rowdy LOL :) I am sure Judy loves it too :)
take care,
Lana