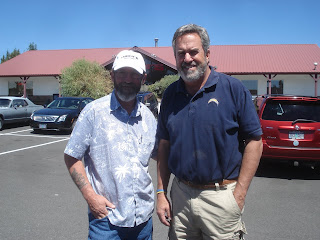 I know that I have not posted as much lately. And there is good reason for that. I have been very busy. So busy, in fact, that Judy said to me the other day, "Sweetheart, I have not seen you much at all in the last four days".
Between hot rods and Model A's, baseball games (Jake's sponsors the local 70's plus softball) and playing in two poker tourneys for the traveling wall to driving south twice to visit old schoolmates at a reunion and going to the service for a special great uncle all this tied into my normal work, I have been busy.
But yesterday something special happened that I feel the need to place in writing before I wonder off on another busy day. As we prepared for the beginning of the Band of Brothers, I was over at Bob Maxwell's table when he wrote down a name that stopped me in my tracks, Dan Fouts. I stopped to listen and Bob said that Dan was bringing in an older vet. I promptly stated that I would like to introduce Dan.
Now, I am not an excitable guy but I must admit that this did. You see, if you were to ask me if I could meet any sports figure alive today, who would it be, I would not hesitate to state his name. I followed him at Oregon and later as a San Diego Charger. I would argue that he was the one of the greatest quarterbacks ever. 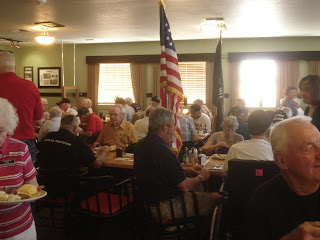 I buzzed around the room doing what I always do but in my head, I was attempting to collect my thoughts. I stopped and talked to Dan for a second filling him in on how we would introduce him and his guest, Stu Shoemaker. Stu was quite a character having worked as a radioman on many passes over the Atlantic. As we introduced Stu, he began to talk so much that we put the microphone in front of him so that all could hear.
After the meeting, I followed Dan out to his car with Stu and we talked a bit along the way, him asking me how long I had actually owned Jake's. I was surprised to see that he knew of my involvements in the community. But, I guess he must watch a little TV between being on it himself.
So, I guess you could say that made my day/week/month. I have another very busy week in front of me with the Good Guys from SoCal coming through Wednesday to being on the team for Kent Couch's next up and coming launch on Saturday. I will attempt to at least lay down some of my thoughts along the way......that is if I get the time.

Your beards could be twins. Dan Fouts is one of the good guys for sure. He not only was the star of the field but then he just tucked himself quietly away and gives back. He is awesome and so are you Lyle.

Lyle, ditto. I grew up in Central Oregon. I was a Ducks fan, I was a Chargers fan, I was/am a Dan Fouts fan. I live in Sisters now and run into him often at various school functions. Although I've met him, I can't even talk to him. I just can't explain it. He and his wife sure do good things for our schools, and more than his football playing, I admire him for that.

I totally understand your statement regarding not feeling comfortable talking with him. I am not sure the reason there also. He is not what you would call talkative in the first place.