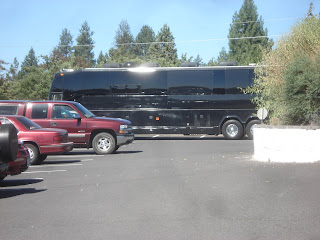 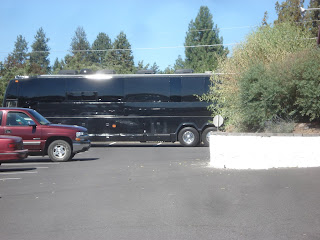 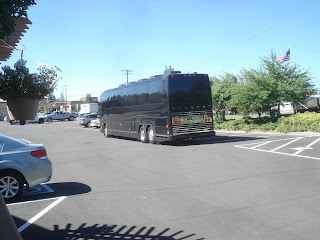 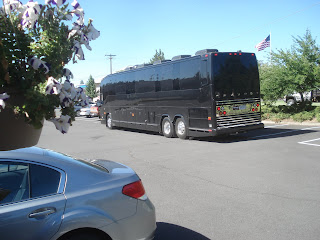 I walked out to get my mail this morning and spied the large black tour bus sitting in the lot. On my way back with my mail, I ran across a woman walking a small dog around. I stopped her and told her she could eat on the deck if she wished.
She informed me that she was ordering to go and that she was on the large bus. I asked her if she was in a touring group since I had noticed that the bus was from Nashville. She said, yes and when I asked her who, she said, "Winona Judd".
I told her that I had many celebrities up on the wall and hopefully, I could get a picture of some sort from her. She said that Winona was being interviewed by some radio person and that if the interview was over when it was time to leave, she would see what she could do.
I told some of the crew but asked them to just look through the window and tried to keep it as hush as possible so that she would not have allot of lookers hanging out in the parking lot.
Her assistant sat on the bench in front of the diner for a while and I kept checking but soon the bus was firing up, the assistant was gone, and the bus was driving away.
At first, I thought maybe the assistant had been pulling my leg so I checked up on their website and sure enough, she is singing in Central Point tonight.
It is funny, I thought I would see the end of this when I left the truck stop. I sure would be interested to know how she ended up in my parking lot that is now so far off the beaten path.
The assistant left behind a can of soup on the bench where she sat. I wonder what the story behind that is. 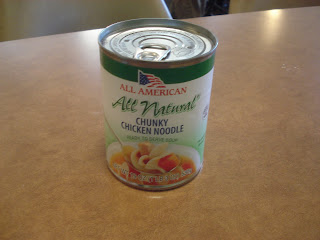 But after all is said and done, we can add one more to our list. Winona Judd has now eaten at Jake's. Cool, huh.
Posted by diner life at 11:08 AM

Wow. She is a favorite of mine for sure. How great.
Kathy