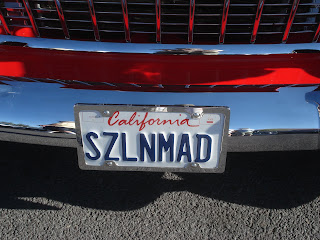 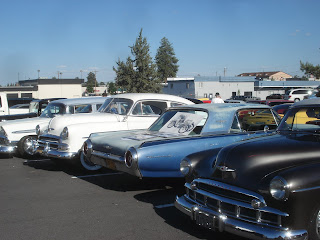 We were informed last week by one of the locals that the car club, Good Guys from Southern California were going to be through this week on their way up to a big show in Washington. I really wasn't sure what to expect but I knew that the word would get around locally and I anticipated a good response for the night. 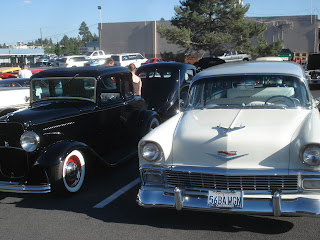 Jim and I considered a BBQ but felt that it was just to last minute to be effective. Now, after the fact, I kind of wished that I had but the crew worked famously and the evening rush was handled very well by them even though they did get a bit frazzled for a short time.
I was in talking with a few people when I was informed that a rather slobbery dog was at the door. I challenged the man bringing him in and was handed a ADA official card with the dogs picture on it. I felt I needed to think fast, knowing that the ADA will not hesitate to come after a restaurant who turns back one of their card holders. But, I knew that others in the diner would not like it at all. I first informed him that he must keep the dog under control and he said no problem. Then, an idea hit me. "Your dog looks very thirsty. If you sit out on the deck, I will be glad to get you some water for him.". This made the dog owner quite happy so I placed him there and found an old pie tin that was being thrown out and filled it with water. I informed Ricci, my swing manager that they were on the deck and I went about my business.
A half hour or so later, I was talking with the DJ, when I saw them leave the deck. I asked how their experience was and they informed me that no one came out. They were livid. One of them said they were going to eat at the truck stop in Lapine. I apologised but to no avail, offering them a free meal but they drove away.
I then walked into the diner to talk to Ricci when I noticed a birthday party being set up in the back room. I told Ricci of the party on the deck that had not been served and then asked of the group in the back room where the Line Chasers were soon to meet. Without my knowledge, Ricci had been overwhelmed as her crew had been late showing up. This hit her hard and I could see the tears starting to flow. I gave her a hug but at the same time, pushing that we needed to handle the back room situation.
What had happened was that the birthday party had wanted the deck but after seeing the slobbery dog had decided otherwise. So......although she had been very wrong for forgetting about the dog owners on the deck, the ignoring had caused the bigger problem of the birthday party to be solved. 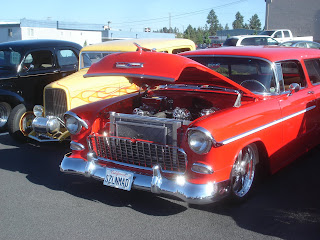 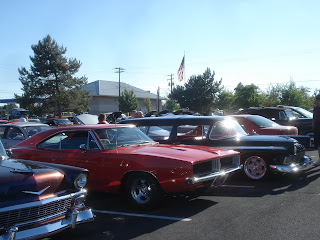 Somewhere around 5:30 or so, the Good Guys showed up and our main floor filled up quickly. Our back room filled up with members of the local group, Line Chasers, and the deck had a birthday party.

I spent the next two hours, helping out where I was needed, solving problems, talking to people, taking a few pictures along the way, and generally, supporting the crew that was busy trying to just stay afloat. I walked into the kitchen at one point to find about 8 or 9 large salads being prepared. There were so many of them that some of them had to be placed down on the waitress counter and the cooks lost count and ended up making two too many. I solved that by moving the extra salads into one of the cooks fridges to be hopefully used for later ordered salads.
Dishing up salad, pouring bowls of soup, sorting out orders, pouring drinks, wiping down counters, encouraging the cooks, busing tables, checking on orders, replacing drinks, setting tables, greeting new customers, and checking to insure that everyone was happy made those two hours fly by and just as fast as it started, it finished and the rooms began to clear out. 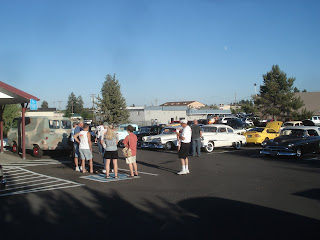 I went outside and thanked the group from SoCal for stopping in and wondered around the lot talking to many of the locals who had just come out to look. One local chided me about me rolling in the dough for the evening. I stopped and smiled at him. "Are you eating tonight?", I asked. "No", he said. "Am I charging you to walk around and look at all of the cool cars?" "No" "Do you feel obligated to come in and eat?" "No" "Are you having fun and do you feel welcome?" "Yes"
"Good, because that is the most important part of this all. It is not about the money, it is about the fun. If I do my job right, I should make some profit also but that profit is not my main focus, this is". My point hopefully made, I thanked him for coming around and told him to stay as long as he wanted to. 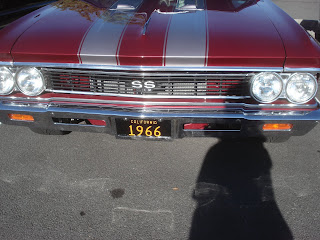 After seeing off the good guys, I went back into the diner to help the crew get cleaned up. I noticed the flowers on the deck starting to wither so I drug out the hose and watered them before bringing them down for the night and letting down the umbrellas. Chris said something about the chairs and I told him that six were missing. We both agreed that it was pretty lame and bold of someone to just come up and take them and in the back of my mind, I logged a note to put up the extra cameras that I have in the office to insure that no more disappear.
Dog tired, I locked up my office around 8:30 and headed out to my Model A. As I got in, I noticed that a few of the Mustang guys were helping out the fellow who had brought his Delorean. I laughed to myself that the most expensive car on the lot would not run. I noticed a very drunk man staggering around and I waited to insure that he did not get into a car himself to drive away. He staggered over to the guys, said something to them and walked around the building. 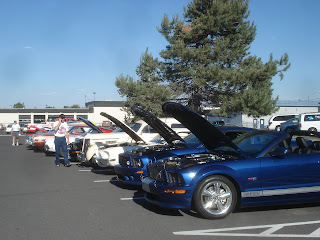 My trusty old A started up on the first go and I drove over to the Delorean and asked if they needed a push. They all laughed and we all watched as the drunk staggered to the trees behind the diner and passed out in the dirt between the trees. My heart went out to that soul but what can one do. They chose their lives and make their decisions. I wondered what had turned the man to make such tragic ones.
I drove home and Jay wanted to watch a movie with me so we turned one on and I quickly dropped off to sleep on the couch waking up just before the movie finished. Getting Jay off to bed, I too crawled into mine but the two hour sleep had my eyes open.......so, I wrote this all down. Now, hopefully, I can get some more sleep before starting up another busy day.
Posted by diner life at 12:55 AM