A day with Jay 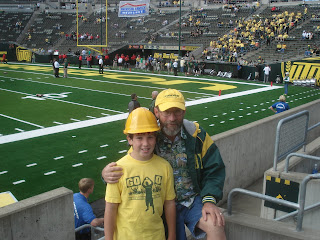 We got up early and headed into Jake's for breakfast. As we sat at the counter, Jay asked if he could see the tickets. I handed them over without comment and he looked at them. "Pretty good seats, aren't they?", I asked. "Yes", he answered. Neither one of us realized just how good they were.
We put our flags on the side windows of the car and off we went. I love being a grandpa and I love being with my grandson. He is such a good kid and so fun to be with. We listened to music and talked as we drove over the pass to our game. "I hope it is a blowout, papa.", he said, "I like going to a game where I am pretty sure we will win.".
We had hoped to try and find the blue pool along the McKensie river along the way. But as we drove closer to the spot where I thought it was, I realized that our time was fading away, so we kept on going.
We noticed that many of the cars that were headed our way were also going to the game and joked about being in the 'Duck' parade. It seemed that most of them either sported flags or stickers on their car. The closer we got, the more cars, many of them honking as they past.
We used to park at the Williams bakery which is now the site of the new basketball court, so we drove behind the new stadium and parked on the road behind. Then we set off on foot to Autzen.
Just as we did while driving in, we talked and laughed as we kept a quick pace with the others to the excitement of the first game of the year. The closer we got, the more people we encountered and the more crazies. As we came over a rise, we saw it, our goal....Autzen Stadium.
Jay spied a stack of Game Day magazines and grabbed one off of the top. We past through the turn stills and noticed that they were not letting anyone in yet so we headed over to the practice building where they sell food before the game. Jay told me that he wanted hot dogs so we walked around looking but found no food court with hot dogs. We decided instead to go inside knowing we could get a dog there. There were no lines and we grabbed our dogs and ate them as we walked down to our seats. 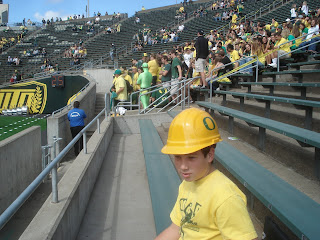 The closer that I got to the bottom, I began to realize that the third row might be closer to the front than I thought. As we passed the sixth row, I counted only three more rows and I realized just how good the seats really were. We were on the front row. As we walked down the row, we found that it was even better. Our seats were the last ones on the row, closest to the middle of the field. As we sat down, we were looking down at the 20 yrd line just to our left. We looked off to our right and saw the students section that was filling fast while we were the only ones in our section for rows behind. 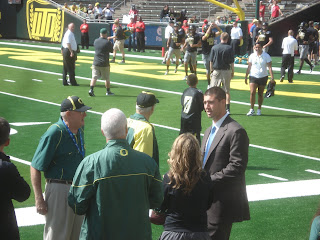 We sat and watched as the players warmed up on the field. We weren't sure who was who but we soaked in the realization of just how close to the action we were going to be. We watched as two or three of what we figured were alumni stood in a circle and talked. I wondered openly who they were. The student section started chanting "Joey.....Joey". I looked down and watched as Joey Harrington walked over to the circle and began talking with them not twenty feet from us. 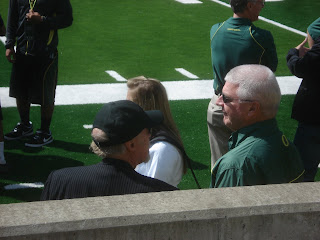 Shortly, the chant changed to "Uncle Phil" and I watched as Phil Knight walked over. He stood just past the wall in front of us. "Come on Jay", I said, "Let's go get your picture with Phil Knight". A few years ago, Jay would have just complied but I have noticed that as he has grown and is now about to go into Middle school, that he has began to have his own mind and he did nto want to. "Ok, little buddy, but I want you to let you know something. Ten years from now, you will look back at this and say, 'Man, I wish I would have done that.'". I told him that I knew that as a fact from the various decisions that I made that I regretted later. I hoped that he would let that set in and change his mind but no such luck. So, I didn't bother asking when Chip Kelly showed up. 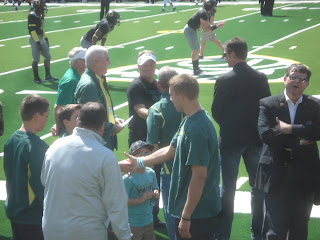 I noticed two things as I watched the team continue to warm up. First, their confidence. They walked and warmed up like they knew they were special. Not cocky but confident. And the second thing was that right in the middle of them was Chip, clapping to the beat of the music that was being broadcast while the team did the same with their warm ups and stretches. The team spread out over the field and then faced the other team as they worked out. I knew the other team must have been intimidated by it all. They then brought themselves into a smaller and smaller circle around him before breaking up and heading back off the field to come back on for their official entrance.
We called as many people as we could and asked Trinity to tape the game knowing that we would probably be able to see us a time or two on it. The excitement built as the team ran onto the field and before we knew it, the kickoff had started.
The Ducks received and the plays came so fast that the Lobos could not even set up their defense. Before we knew it, they were right in front of us and I began to snap pictures of the game. Someone behind me said, "From this great spot, those pictures should be good enough for a magazine.". Just then, one of the Lobos picked off a pass and another man behind me said, "Yea, but that one would be better for a magazine in New Mexico.". Jay and I agreed that just about every game that we have come to, the Ducks have turned it over in the first possession. 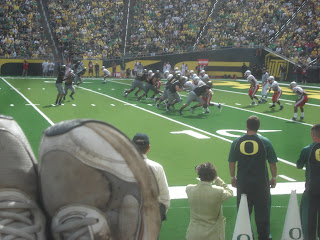 But, the Lobos fortune was short lived as the swarming Duck defense shut them down and in what seemed like seconds, the Ducks were up 21-0. Trin texted me to tell me that they could see us on tv. I looked down and noticed that a street dressed player was being interviewed right in front of us so I told Jay to wave and with both waved at the cameras wondering if the girls could see us on TV. I texted and asked them if they could and soon got the answer, "Yes!". Later, the taping of the game showed that you could see me sending that text. 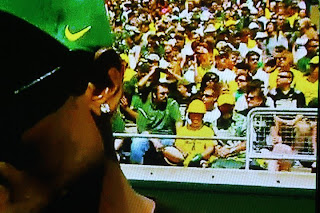 Before the end of the first quarter, I noted that the Lobo's defense had their hands on their hips and looked tired. The Ducks seemed to be running them ragged.
The first half seemed to drag in the fact that their always seemed to be lots of time left after each touchdown and on the other hand seemed to fly by as the excitement of each score made time fly. Before we knew it, it was almost half time and Jay and I decided to go back up for another dog before the rush of half time. Once again, we hit no line as we ordered our dogs and sat at the top of the stadium wall eating them. Trin called me and asked where we were as they had just scanned our seats and we were gone. I told her and she said that they figured that might be where we were.
We found our seats again and Jay asked if he could go back up and fill his water bottle. He wanted to do it on his own and as he is almost in Middle school, I decided to allow it I told him to hurry back as I didn't want him gone during the rush out for half time. He agreed to and headed up the steps. I watched as the Ducks kicked a field goal and then held the Lobos on yet another 3 and out. The time was ticking down getting closer to halftime as the Lobos set to punt back. I nervously watched up the steps and smiled as I saw the yellow hard hat of Jay's coming down the steps. A roar brought be back to the game as I watched the same player who had ran back a punt minutes before run yet another back and the score was soon 59 to 0 at the half. Jay appologized for taking so long but told me that one family wanted to take his picture in his hard hat. I had noted that many had complimented him on it. 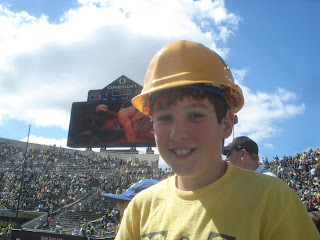 Jay and I watched the half time show and stood up leaning over the railing in front of us as we talked and waited for the second half. I asked him if he wanted to go after the third quarter and he said, "No, I want to stay for the whole game.". I asked him if he wanted to go down on the field and he again said, "No, about 2 minutes before the end, let's go up and get ready to beat the rush.".
We did just that and were up and ready to leave as the Ducks dropped on the final snap just 5 yards from another score We had no idea that the 72 points that they had score had tied some sort of record. As we walked down the steps, we noticed that the team was coming out so Jay ran ahead and positioned himself to slap hands with them as they came off the field. I watched and smiled as Jay finished off his big game with a flair, slapping hands on the last two players, the Quarterback and the Running back who had set a new team record in scoring while only playing less than a half. 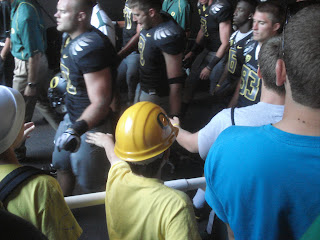 We then darted through the masses back towards the car stopping only at the other big finish for the day, Track Town Pizza. Jay found us a seat while I ordered the pizza. I forgot just how big their pizzas are and we ended up sitting across from a small family who happily took up our offer of sharing our pie with them We sat at the table watching other football games and talking with others of the game we had just seen.
Tired but happy, we made our way up to the car and headed home. For me, a great day and a great time with my grandson. For him, I hope an experience that he will not forget.
Posted by diner life at 9:16 PM

What a great day, Lyle. Days spent with Grandpa are still some of my top memories. I just love this post and thank you for sharing the true joy in life.

You, indeed, saw a terrific game.