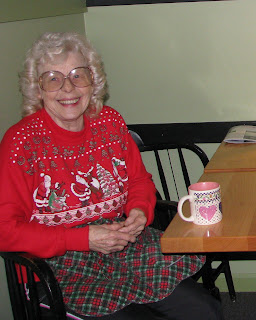 She came to me sometime in the early 90's, I believe. Her husband had passed away and she needed to go back to work. She was a pleasant pretty woman who quickly worked her way from cashier to waitress.

While she was never one of my faster waitresses, she overcame that with incredible efficiency and a trait that I hold the highest among servers and and that is simple caring. She genuinely cared for every one of her customers.

She was a strong part of our crew and we even hired many of her family members from one time or another as they grew up. I recall an employee party that she held in her back yard once after she sold her house and moved out onto some property in the woods that she owned. She lived a block away from me back then and watched our dog once when we went away on a trip.

She retired and it wasn't very long before I heard that she was back to work as a cashier for a store in the northern part of town. A cashier position came open and she applied for it and became a valuable part of the crew once more. She was one of the crew members that stuck with us when we made the move and worked hard to get the new place clean and ready. She was proud to be a member of the team.

Sometime after the move to the new location, things started to change a bit with her, however. She became moody at times and would have occasional anger problems. Since she was easily our oldest employee, I just put it off as age. But, the problems became acute and I was forced to confront her. She seemed confused by my challenges and did not seem to realize even when I showed her written remarks from customers. I eventually had to make one of my hardest decisions that I have ever made when I pushed her into retirement. Although she told me later that it was what was needed, I have always had a bit of guilt especially since she had stuck with me in those hard times.

It wasn't long before we discovered the reason for those mood swings. Fran had brain cancer. Many of the old crew stayed close to her as she progressed with the illness. Just a couple of weeks ago, Judy and one of the other crew members went to her house to visit with her. I received the call last night from one of the crew members. Fran had passed on.

So, tonight, sleep evades me as my mind races with thoughts and memories of this dear person. I can easily see her bright smile, her perfectly arranged hair, and her soft voice. One fond funny memory that I have was when a rather strong good looking cowboy truck driver came walking through the diner. All of the girls were a bit taken by his looks and I remember Fran commenting, "Even I wouldn't mind jumping his bones.". Since Fran was openly religious, we all stopped and stared as she became immediately embarrassed saying, "I can't believe that I just said that.".

She opened her house to women in need and was always seeming to be helping one of her grandchildren in one way or another. It just all went along with her caring spirit.

She is now added to the list of people that have been close to me who have succumbed to that horrible disease. It angers me when I think of how our government spends ten times the money on research for aids as it does cancer while cancer is far more prevalent and indiscriminate. Don't get me wrong, aids is a horrible disease, but it pales to the scope of cancer. I have known one person in my life that died from aids while the list from cancer is so long it would easily fill a page.

I remember watching a movie once where a doctor had found a cure for cancer in some obscure flower in South America. Some diabolical group had knocked him off since there was so much money to be made just in fighting the disease that they did not want a cure. I have always wondered if their were any truth in that story.

Although she stated that she understood and forgave me for letting her go, there still remains a small tinge of regret there. One thing is for certain. She will always be a fond memory and has garnered a solid part of the legacy of Jake's.

As I firmly believe I will see her again one day, I will not say goodbye, however, but a simple "See ya later, Fran". You are and will be missed.
Posted by diner life at 12:52 AM

Thank you Lyle for Sharing, I knew she had passed but didn't know how. I loved Fran, yes she drove me crazy sometimes lol but she was always kind to me. I have such fond memories of Fran :) i will miss her greatly...
blessings to you and your family...

PS - I don't know if this was unintentional but your line about the thing you "hold the highest regard for in servants" - Didn't you mean servers? Because I know being a waitress for many years we never ever wanted to be called that.

Take care and my best to your restaurant family.

Great post, Lyle. I remember Fran from years ago, and after just moving back to town, kind of wondered what had happened to her.

I can certainly appreciate the tough decisions you had to go through and the guilt that it brought on... However, you and Fran are certainly better for having known one another. Thanks for taking a chance on such a funky old gal.

Keep your chin up. Bend loves you guys!

If you had meant it in the biblical sense I would've never asked. :) Thank you. And I like this pic' too.

How are you feeling btw? Hope all is well.