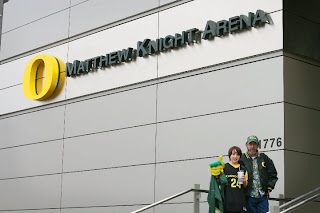 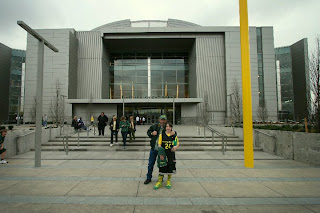 A catchy phrase of which I did not come up with. I saw it on a T Shirt at the basketball game on Saturday.

There is always one thing that you can count on.....things will change. I have many memories of the Eugene area in my youth as my grandparents lived there out on River Road. I can recall when we would visit, dad would always stop at Williams Bakery thrift store for large packs of donuts to add to our breakfast fare. I remember well the bakery smells that would waft through the store as well as the taste of dad's favorite coconut glazed donuts.

Fast forward to my early Jake's years and I had the choice of three bakeries to choose from but primarily Williams or Franz. I am certain that my memories helped but Williams had better bread, better pricing, and better service so the decision was a no brainer.

There were also added benefits to this venture and that was tickets to Ducks games. I would be given one football and one basketball game every year to take Casey to. One football game, they even took us up to the touchdown club at Autzen where we met the football and basketball coaches. On another occasion, the district manager even treated Casey and I to dinner at an Italian restaurant prior to a game at Mac court.

And Mac court itself brings back so many memories. As a youth, we drove over a few times to catch games there. One particular game, we all stopped at one of the girls uncles house in Springfield on our way home. The girls used the bathroom inside while all of us guys just went out behind the barn. The problem there was no one said the fence was electric and guess where I peed. I came back in the house quite shocked and with the front of my pants slightly wet bringing the house down as I became the brunt of many jokes especially from the uncle who immediately said, "Hey, looks like you just had a shocking experience.".

Part of the Mac court lore was the walk through the cemetery. A walk that I took for the last time last November when Trin and I took in our last game there.

The Autzen experience back then started at the Williams bakery building on Franklin Blvd. We would park at the bakery and walk into the stadium with all of the students which added to the lore of the game. I recall many a win walking back with happy students over the walking bridge and then pizza at Track Town before heading home.

In the early 90's, things began to change. Franz bakery in Portland could not compete with Williams so....they bought them out. This had good and bad. The competition declined but it added a new sport......the Portland Trailblazers. At one time, I was given my choice of games in the season. The local manager would call me up when the schedule came out. They awarded me with a full uncut page of Franz Blazer cards that hung on my wall until the old truck stop sold. When I had no room, I don't recall who I gave that too but I am sure Jay would have loved to have it now.

This brought the local manager and I together off of the business relationship and we became very close often taking in games with our sons together. One of my fond memories there was when we took in the 20 year reunion game in 1997. We would always eat in the special sponsor dining hall prior to the game and we ended up sitting right next to the 1979 world champion Blazer team and meeting such greats as Jack Ramsey and Bill Walton. I even had a very lengthy conversation with one of the Blazers as we waited for the start of the game.

Then Franz purchased their other main competition, a company out of Seattle of which I don't recall the name. Now, you might call this a monopoly but for whatever reason, it was not considered this but it did change the playing field drastically. Soon all games were gone from the local standpoint when a new 'numbers' man took over the reigns. He reduced the number of sponsor seats and gave them only to the large corporate clients thus taking both us and the local manager out of the loop. The era of free Duck and Blazer seats came to an abrupt halt.

While I have received a couple of Blazer games since then from other companies, the now cold Franz has never offered me one since then. I asked my latest manager last year if he ever gets to go and he said it was a real rarity. I still stayed close to the 90's manager up until he left the company which called a halt to our weekly lunch or coffee meetings where we would talk sports and kids. I miss those as much as the games.

So, on to more recent days and the Williams bakery on Franklin is now gone. In it's place is the new Mathew Knight Arena affectionately called the Matt. This has changed both of the Duck experiences. No longer able to park at the bakery, Jay and I have tried a few other places only to end up parking somewhere in the new arena neighborhood so that we can experience the walk part of the game and the dinner at Track Town afterwards.

Saturday, we experienced the completion of the change with our first game at the new arena. We were able to park only a short block or two from the stadium which was pretty cool and we walked around the outside of the facility before taking our place in the front of the line a short 1/2 hour before the doors opened.

The security guard looked through our bags early so that we could make a quick entrance as we had General Admission seats and we thought we would have to run to get the best ones. I asked a few of the guards at the door for the best route and was surprised to find that no one knew it. One told us to take the elevator as it was quicker but Jay and I decided it would be the stairs and whoever got up their first would save seats for the other.

The doors opened at noon and Jay and I were off. I lost my cell phone and quickly scooped it up and sprinted after him as fast as grandpa can. We headed to where we were told the stairs were only to find a room that we were told we could not enter. We quickly decided to take the elevator and found we were the only ones. The elevators are manned and we asked the operator to take us up to the General Admission seats. "They are on the other side of the stadium.", he said. I knew better and just said, "Second level please.". We dashed out the door and found the entrance to the best section and as we came in the door, thought we were first. But, Carrie who had found the stairs had beaten us. We quickly found the best seats right up front and settled down for the game.

I took a walk around prior to the game and realized that unlike the Mac, there were no bad seats. I remember a few games at Mac court where my neck hurt from the ducks and twists of finding the best vantage point to watch. All of the seats at the Matt gave great vantage points and the stadium floor loomed large from all. 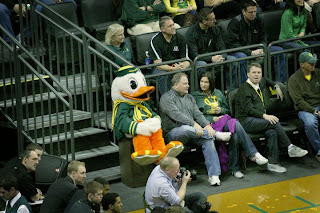 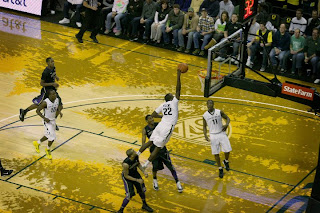 We enjoyed our game especially since the Ducks kept the Washington Huskies in line only relinquishing the lead twice. The Duck mascot kept us quite amused also as his antics actually caused Carrie to say, "I don't know what is more fun to watch, the game or the duck.". 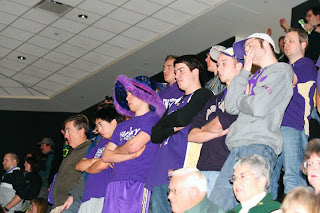 I actually felt bad for the Husky faithful who were quite vocal at the start of the game but quickly quieted and then seemed downright depressed as the game went out of reach. 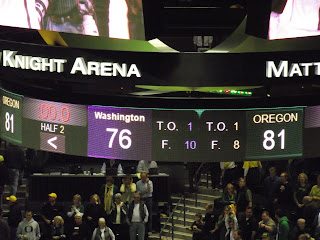 The stadium still has it's bugs, however. One of them being the sound system. They ended up turning off all of the outside speakers when they could not get them to stop screeching. And one of the elevators jammed afterwards trapping some people inside and causing a local 911 call. I cringed at the thought of that and wonder if I will ever be able to ride their elevators again. 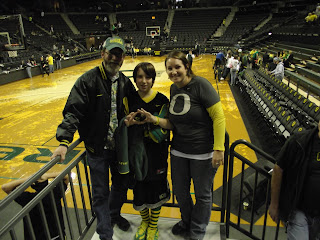 Afterwards and much to the chagrin of Jayden, we decided to finish off the new experience with a new pizza experience also as we stopped at the parents of one of Carrie's fellow employees at the bank. We stopped at the Roaring Rapids Pizza. It was quite brisk there and we shared a large pepperoni and olive pizza. The pizza tasted great but I ate too much and the pepperoni later burned into the side of my stomach. A mixture of apple cider vinegar and apple juice was needed to put out the flame and allow me rest. I remember thinking that their was no way that I was eating our normal pizza for the Super Bowl party.

All in all, the new experience was good but as you can see has brought up many old remembrances. Nothing in the future is for certain. The only thing we know for sure is that things will change. We cannot dwell on the past but must embrace those new experiences making them future fond memories.
Posted by diner life at 3:06 AM

What a lovely post. You sure can tell a story. :) The pics are great.

And now I am jealous that you got to meet Bill Walton. WOW.

Lyle, When walking on campus between classes the scent of fresh baked bread was often smelled - your words stirred some fond memories of being young. In Vancouver we have been fortunate to have an Oraweat outlet close-by - the company that holds it is Bimbo's and before that Entemanns owned it. Might have to start baking bread if it ever closes.
8-}

Orowheat no longer competes in our local market. We have two choices. Local bakeries or Franz. While I would love to use local, it adds far to much cost to the plate for a place like mine. I believe I would, however, if I had a more high end place.