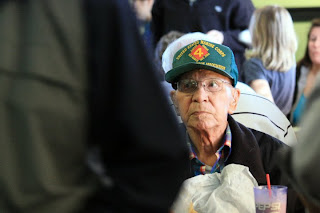 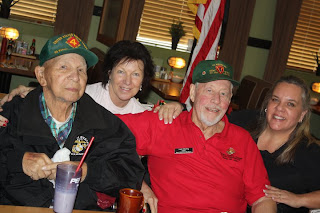 Thank you (and Judy) for all of the love that you show for our veterans, and for your sincere compassion. I don't know what else to say. I have deep respect for your respect.

[Lyle I think you meant "DON'T" stop seeing him near the end of your post.]

Your stories are wonderful but so, so heartbreaking at the same time.

I am on the other part of the US - but I wish I could stick my head in and give a hello and a heartfelt thank you.

My best to Phil. And to you.

My father-in-law was on Iwo Jima, also 4th Marine Division like Phil. I wonder if their paths crossed while fighting on the island. My father-in-law is 90, with some dimentia now and living in an assisted living place. He is a wonderful man, kind and generous, with a Marine's toughness and I am so proud of him. Many thanks to the brave men like Phil and my father-in-law who fought for our freedom then came home and contributed even more to the growth of our country. Belss them all.

We will miss him.

Thank you Lyle and Judy. The veterans of Central Oregon are truly blessed for the love and care you give. God Bless You, Mike

Lyle, The Vets of Central Oregon are so blessed by having the love and care you and Judy give. God Bless You both.