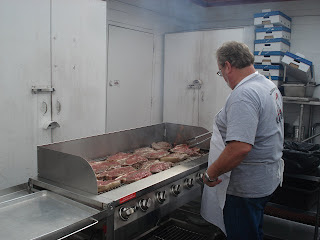 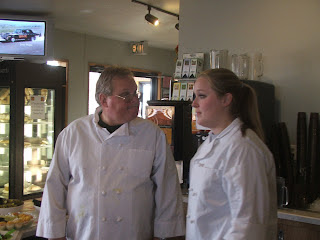 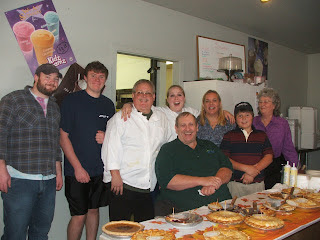 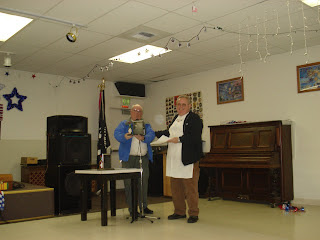 I want to tell you a little story. It is just one of the many stories of the time of the change over of Jake's. The time when I stopped being just manager and became owner.

After talking to my crew to find out who was willing to take the jump with me, I discovered that I was going to lose my kitchen manager and my baker. They both decided to take the opportunity to change their jobs and lives. It was a very hard blow in that I was flat out just trying to keep the place alive. I knew that I could not do it all. With over 40 employees, I needed competent managers in place.

I recalled a man that I had hired just recently who was doing prep in my kitchen. I had noticed his abilities and had remembered that his resume was very good and I was surprised to see him take a prep job on. I pulled up his resume and read where he had owned his own restaurant for 10 years in the Napa Valley down in California.

I pulled him to the side and talked about his helping me out in the kitchen getting the organization under control. He was interested so I informed him that we would be bringing him along slow since he was at the bottom and that it might take time for the other cooks to start taking his directions.

During one of my many meetings, I brought the cooks together and talked to them about various changes that were going to happen. As I brought up Jim, I was careful to look them all in the eye and look for hints of unhappiness or detention. I saw none. In one of those many spur of the moment decisions, I boldly pronounced that Jim would be heading up my kitchen. Again I looked and again I saw full support. Now, Jim just about fell off of his chair but he went right along with it. Afterwards, he cornered me. "I thought we were going to do things slow?", he questioned. "Are you ready?", I asked and he replied "Yes". I replied, "I am far to busy just trying to keep this boat afloat. You are now my general in the kitchen.". We shook hands and so, Jim changed from prep cook to Chef in a matter of just a few minutes.

I have never regretted that decision. Jim brought with him a new zeal and I found him to work just as hard as myself and do whatever it takes to keep the kitchen running. He also brought skills to Jake's that were not there before. One of his first changes was to begin cutting our own steaks and chops. This not only saved us money but upped our quality. He also took on all of the baking chores until he had someone trained to assist him.

He then increased efficiency in the prep and baking part of the kitchen hiring and training two great girls that are still with us. He trained them to multi task and assist other parts of the kitchen.

But perhaps the greatest new skill that he brought with him was his ability to cater large groups. He seems to thrive on the challenge of them. And I just have to ride along on his shirt tails and just follow his direction. We have catered as small a group as 20 and as large as over 250. In all cases, the entree has been handled exclusively by him. Last November, we entered in the Veterans Chili cook off where he placed first place in the green chili and second in the red.

But perhaps his biggest accomplishments is one that he brought with him from his own restaurant and that we have just continued his tradition. And that is our Thanksgiving feast for Seniors. We shut down the restaurant for Thanksgiving and then open it up that afternoon with an all volunteer staff. We target seniors who don't have family around and attempt to be their families. We sell the meal at our cost and don't charge if the person cannot pay. We also deliver to any senior who is home ridden or just doesn't want to go out. Last Thanksgiving we served over 240 seniors.

All this from a man who suffers from sleep deprivation and diabetes. Now, don't get me wrong, Jim is no saint. He is sometimes bull headed and stubborn. And tends to be forgetful at times but......there is one part of him that overrides all of that and that is his heart. I don't think that I have ever seen a person with as big of one.

Last week, we did a large cater job of which we received a sizable tip on top. I gave Jim the tip for his hard work and for him to decide what to give to the people who assisted him. I told him that I expected him to keep the larger part for himself.

Now, Jim is not that well off. He drives an old $500 Subaru and lives in a small apartment with his wife who works at Isky. But Jim came back to me later on in the day and asked for my permission to give his part of the tip to some of the crew members in the form of gifts to show his appreciation for them.

So, if you are in Jake's and you see him walking around with his white cooks apron on or sitting at the counter eating or working on schedules, please take the time to say "Hi" to Chef Jimmy.