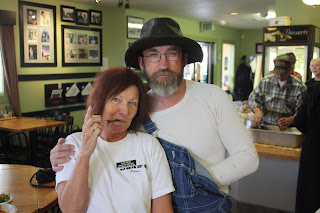 My days can often times seem to just blend together into what seems like a constant stream of events with a short period of rest at the end of them.

Today is Wednesday and my last few days have been packed with events, meetings, people, friends, and work.

A good taste of that would probably be Sunday. I awoke and headed in early to try and get some paperwork done before the busiest day of the week started. I grabbed the receipts from the day before and slipped into my office seemingly without too many people knowing that I was there.

I quickly sorted out the receipts along with bills that needed to be paid when I was called out front by a customer. The customer was an old friend and his family. I had not seen them all together since the early 90's when two of the kids (now adults) worked for me at the diner. I laughed and joked with them all and they asked me if I would take a picture of them all out in front of the diner. I agreed and it was then that I noticed that the father was quite frail looking. After taking the picture and getting hugs from all of the family, I met up with the parents at the register where they were paying for their meals. As the dad left, the mom informed me of why her husband looked so frail. He has terminal cancer. Obviously the reason that the whole family was together. The thought of it shook me to the core. Not only because I know this man but because of my own dealings. On Friday past, I had four more biopsies done and have to wait for a couple of weeks to get the results. It is imperative that I stay diligent with this and catch these small spots as early as possible. When I saw my friend, I was sad and yet thankful that my own is able to be caught in such early stages that it does not impair me nor cause me need for anything other than small surgeries.

As I walked around the room, pouring coffee and greeting guests, one of them stopped me as he was going up to pay his bill. I recognized his face but could go no further. He ended up being a near and dear friend from quite a few years back. My mind raced for memories of our last encounter and I remembered a funeral that I had seen him at and went over and sat next to him. He has always been a kind and sensitive man and the next day, I was surprised with a phone call from him thanking me for sitting next to him at the event. He said something like "It meant more to me than you can imagine". Such kindnesses and conversations like that burn into your memory as a cataloged event of sorts that I will never forget. I told him that we needed to stay in touch this time and he told me to look him up on facebook. I did that evening and am now linked up with him there. It is my hope that we will see each other in shorter breaks than 10 years or so.

The day kicked into gear and the paperwork stayed on my desk as I made my rounds around the diner, pouring coffee, busing tables, sorting food, picking up spills, moving tables, assisting the greeter, and talking with customers and staff. I had found a few day old cinnamon rolls and had taken them into the kitchen to be transformed into cinnamon roll french toast for one of the specials. The older cinnamon rolls make especially good and rich french toast and to me are quite the treat. I pampered myself the other day with one as a sort of trial or lets say 'quality control'.

The day seemed to fly by and I took the first break to go back to the office to finish off the work. Soon a knock came to the door and Casey handed me a phone. A very rough voice on the other end chastised me.
"You are the fourth person that I have talked to. Doesn't anyone down there no what the hell is going on?".
"How can I help you sir?"
"Who do I write my check out to?"
"You check for what, sir?"
"For the damned spaghetti feed, what else?"
I smiled to myself and said, "Well, sir, I am not really sure either but I will look it up for you."
"Don't any of you down there no what is going on?"
"Sir, we are merely producing the event for a needy and worthy cause. This is their event and I will be assisting them. Wait a second and I can look up the actual name of the organization as it was just recently formed."
I looked up a recent email from Dick Tobiason and gave him the name of the foundation, "Bend Heroes Foundation".
He had me say the words slowly one at a time.
"Bend, as in Bend, Oregon"
"Ok"
"Heroes as in they are heroes that we are trying to honor. In this case, the WWII vets"
"I am one of those heroes"
"Good, then we can honor you will you join us at the spaghetti feed today and then also in two weeks when we honor you all in Sunriver"
That confused him and so I explained to him that the money that was raised that afternoon would help pay for the cost of the signs along the highway and the kick off event in Sunriver in two weeks. I went into detail but the more detail, the more confused he seemed to be. I left him with the hope that I would see him that afternoon. I then went searching for the reason that it took four people to finally get to me. The cashier had taken the initial call. The man had yelled at him when he got his directions mixed up. "Don't you know north from south?". So, the busy cashier had passed it on to the greeter. The greeter thinking that he wanted a to go order then passed it on to one of the waitresses. This particular waitress does not hear as well and with the ringing of the diner in her other ear ends up passing it on to Casey. Just as soon as Casey hears the mean voice on the other end of the line, he knows that it is best for me to take the call. Sigh.
I informed the cashier that the next time, just transfer to phone to me immediately.

That small distraction behind me (took up nearly an hour), I sat down for a quick bite to eat before heading home to get change and get my Model A. I changed into my overalls, long underwear shirt, and old hat. I sprayed out my beard and put my corn cob pipe in my mouth to check on the look in the mirror before heading out. As I came down the stairs a startled Mia (toy pom) barked at the stranger who had invaded her space. After hearing my voice, she calmed down and I soon had the A fired up and was heading back to work.

I arrived back right at three to find quite a few eaters still in the diner. A couple stepped in the door who had just gotten back from San Antonio where they took their picture outside a Jake's there who's logo was very similar to ours. I checked to see that the grill was still on and told them to leave it on for a second longer while the waitress took the last order.

While the last diners were finishing up, we cleared off both of the counters and made ready for the buffet style feed.

With that, I will close off this post as Chapter one. I fear that the whole thing might end up looking like a book and besides, I need to get back to sleep for my busy day ahead. I will attempt to finish this off either later on today or tomorrow night when I wake up in the middle of the night and need to write simply to rest my head so I can continue to rest.
Posted by diner life at 4:52 AM