We have good days and we have bad 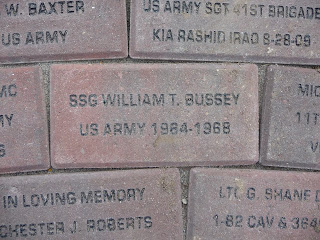 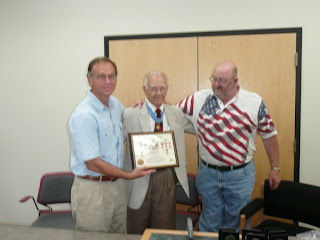 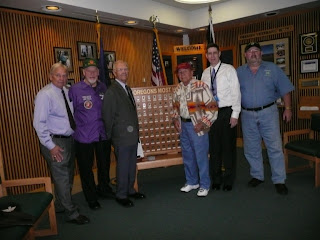 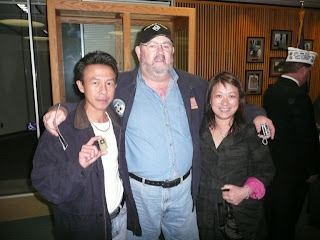 And I have had both in the last two days. I will start with the bad.

I drove up to the hospital Friday morning to visit two of my Band of Brother buddies there. Bill and Loren. These are the two guys in the group that give the group more of their time and resources than most. Loren takes pictures, prepares the book of the brothers, and purchases name tags for all new members. I am sure that he does not always enjoy this task but he took it on and has been very diligent at it. Bill has been the one who tries to acknowledge the vets for the things and places that they have been. He buys coins, patches, and hats and gives them out. He has bought me one of all. The group gave him money to help and he just bought more items with it. Bill has gone all over the state with members of the group to help acknowledge veterans.

As I stood in the lobby of the hospital, joking with Jack Mangin (my friend, my mentor, and the man who created Pilot Butte Drive Inn), a woman came to the counter asking for William Bussey. "Hey, I am going that way, let me walk you", I said. I walked to the elevators and out onto the floor with Bill's next door neighbor who is retired military along with her husband. As we walked into the waiting area outside his room, I could see something was wrong. Bill's wife was sitting with two people around her. You could see a shocked expression on her face. Bob Maxwell and Dick Tobiason were standing close by with gloom looks on their face.

We soon learned that Bill had just had his second cardiac arrest and the doctor was telling her that he would not survive. He took her to the other room and when she returned we were told that the decision was made to take him off of his machine. I was shocked. I had just talked with Bill the day before and his voice sounded strong as he explained that the doctors did not know what was causing him problems.

We all voiced our concern with Linda, Bill's wife and the three of us walked up to see Loren. We ran into the doctor there and asked him how long he felt Bill had. He informed us that Bill died immediately. My feelings were shock and sad at he same time. Bill was more my age. He was not suppose to leave us yet.

I walked out of the hospital in a sort of funk. I remember seeing Jack and mentioning it to him. Jack consoled me, telling me how sorry he was. I wonder how many that he deals with like that working at the hospital as he does. He and his wife have volunteered there since their retirement and sale of the business.

I drove back to the diner and walked into the office where Judy was sitting at my desk. "How did it go, sweetheart?", she asked. "Not good", I said, and explained what had just happened. I got on my computer to see if I could find a way to let as many of the brothers know as possible but found instead an email from Bill the day before he went to the hospital.

On Monday, I had gave announcements in Zin's place and had called Bill over to give out his awards. Bill struggled with the microphone and eventually gave up, handed it to me, and yelled out to the room. His email apologized for the incident (not needed) and then went on in typical Bill fashion to inform me that when Zin returns, we need to figure out that mic thing. For he was not going to use the mic and he was not going to yell. I could hear him speak as I read his words.

I had just witnessed my good buddies death and was now reading his last email to me. My heart was crushed by both of those thoughts as they collided in my brain. I have no good pictures of Bill on this computer but will put a couple that Dick Tobiason sent to me along with a sort of eulogy that Dick wrote from my work computer.

I loved Bill. And will always remember his crooked smile, his desire to acknowledge others before himself, and his unselfish willingness to give. And am stunned to now have lost three brothers in less than a month.

There is one positive, however, in that Bill had shared his faith with me. And there is no doubt in my mind that I will see him again one day. I wonder if he will be wearing his overalls and a Band of Brothers hat.
Posted by diner life at 12:19 AM