A night with Charlie 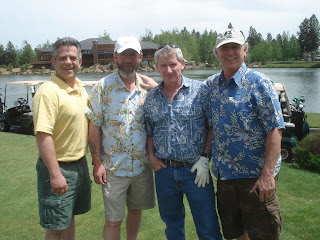 Tuesday, I had a great time at the annual Combined Communications golf tourney. My team composed of my buddies Frank, Mark, and Dave started off with a bang getting birdies on our first two holes. Then, as things go, we didn't do so well and ended up 1 over par for the game and a couple of strokes out of the prizes but.....we had a great time.

I was pretty tired when I got home and Trin had baked some Zucchini bread that she asked me to sample. I gladly downed one of her small tasty loaves, soaked in the bath, and went off to bed.

Around midnight, I awoke in a sweat. I opened up the window and let the cool air blow on me but the heat from within continued. I washed my face with cold water and went downstairs to not disturb the girls. Nothing I could do seemed to cool me down and I soon began to feel sick. I now wondered if I had somehow eaten something wrong but all that I had eaten was a sack lunch and a pretty nice buffet dinner. If either was the case, many others would be sick also.

I began to throw up and usually after that happens, you feel just a bit better, but I did not. I began to shake from within. I could feel it down to my toes. Something was wrong. My first thought was that I remember others saying they had those symptoms and found they were having a heart attack. Knowing Trin was probably still up, I knocked on her door and asked her to take me in.

I arrived at the hospital and had Trin drop me off at the door. By now, I was very out of it and I admit most of the rest of the night being somewhat of a blur but I will piece my thoughts together as I remember them.

I walked into the reception area finding no one else around and the lady told me to sit down, not even looking up. I could hear her either chewing or popping her gum (whatever it was was annoying me). Trin joined me and the lady said she was busy but would be with us shortly. I kind of lost it then and know a couple of seedy words came from my mouth like the ones my dad got mad at me for saying way back in sixth grade at school. I then turned to Trin and said, "These guys just don't give a damn.". The next thing I remember was waking up in a bed with wires and tubes attached to me and people all around. Trin later informed me that I had passed out. Then the non-caring attendant looked up at me and said, "Is this normal for him?". Wow, what a statement.

They gave me something that made me feel a bit better but I started shaking and could not stop. Someone gave me a warm blanket and that did feel better but did not curtail the shaking. Trin told me from her perspective that I mumbled a whole lot and the doctors and nurses asked her if she understood me. Then she said, once more from her perspective, that as I became more lucent, I told them what I was feeling but they seemed to ignore my statements which frustrated her.

I recall an alarm going off quite often and Trin said that my heart rate and blood pressure seemed to vary quite a bit. She said the alarm would go off as I shook and she would go get a nurse. She said the nurse usually came into the room and just left. Finally, she asked him if anything was wrong and why the alarm was going off. He said, "Oh, we have been having problems with that machine.". Now, after the fact, does that make any sense? If you are in a emergency room and a machine is not operating right, would it not be best to not use it and replace it with one that does....just my thoughts from the man laying down on the bed.

I seemed to stabilize then it all seemed to hit again. They increased my meds but I thought I was going to get sick again. They gave me a bag but I asked to go to the bathroom. The nurse refused to unhook me or allow me access to the bathroom. I will not go into detail my thoughts nor my embarrassment of that part. Trin said she felt so bad for me and tried to persuade the unmoving nurse.

I know they ran some tests on me. How many, I don't know. I do remember being wheeled to a cat scan. The lady there told me that I needed to stop shaking. I told her I had no control there so she had me hold my breath. It seemed to work and she got her pictures.

So, now, I am feeling better. Pretty drugged up, I guess and drifting in and out of sleep when a doctor walks in and looks down at me. "So", he smiles, "What brings you in tonight?". I know he was just doing his job and I know he was trying to be friendly. But, my mood just did not set well with his words. "I don't know, Doc, I just woke up and decided, oh what the heck, why don't I just go to the ER, let them run some tests on me, and spend allot of money.". He ignored my sarcastic response and began looking at my charts and test results.

He began talking to others around him that he felt it was a basal vagal response. Now, I heard that once before many years ago, when an allergic reaction landed me in the hospital for a few days. My doctor back then told me that it was more like the doctor didn't know for sure. So, I wondered if this one did.

So, around sun up, they just sent me home and I slept for a few hours and took the rest of the day off.

Yesterday, I laughed about it with the guys at the counter relating my experience as I have here trying to make light of my plight. John looked up from his ice tea and said, "Do you have hypoglycemia?". "Yes", I responded. "Well, it sounds to me like a major hypoglycemic attack. Something triggered your pancreas to over react and that threw your body into confusion." John went on to explain that something similar had happened to him once and was discovered to be just that.

So, looking back at it all. I spent a night in the hospital on my back in an uncomfortable bed, had a gum chewing receptionist annoy me, a nurse ignore me, and a doctor try to be cute with me and nothing that they said seemed to make any sense. But John, who paid for his ice tea, seemed to make perfect sense and laid it out in a way that I understood.

Maybe I should just call John the next time. It might save me a bit of money.
Posted by diner life at 4:02 AM