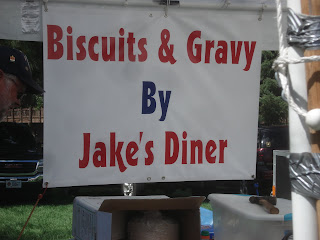 The first year at our new location, Joan from the Central Oregon Chevy Club stopped in and asked me if we would be willing to assist the Salvation Army with their burger sales at the local large cruz in that her organization put on every year. It turned out to be the start of a good friendship with Capt John of the Salvation Army but I would have no idea just what this small turn of events would lead to. I was merely heeding a call for help. No one knew Jimmy's capabilities at catering and this allowed him to show off some of his strengths also. That year, the Salvation Army earned more than they ever had in previous years.

The next year, we set ourselves to assist them again if they desired but as of a couple of weeks before, nothing happened. Then one day, Joan came in somewhat of a panic. She explained that the Salvation Army had pulled out at the last minute and she needed our help. She wanted to keep it in the same realm of someone other than a local business and she didn't know who to turn to on such notice. She pleaded with me to assist her and I agreed to do the best that I could.

Now, I had already struck a relationship with a couple of the local veteran's clubs through my friend, Ron, who helped me ready the building and through that, I talked to a retired officer, Dave and asked his advice. He looked at me and said, "I bet that is something that the VVA might be interested in heading up.". He gave me contact numbers and we quickly rose to assist the local chapter to run the BBQ that year. Thus began the great relationship with the VVA which has lead to many others including some close friendships. It has become the club's largest fund raising event of the year and has lead to them awarding me a lifetime membership and, just recently, Jimmy was awarded a sponsorship membership.

That first year brought some pretty interesting challenges including the discovery that our new grill that we had purchased from Costco had a fail safe device that when you took off one of the tanks, it would not allow it to turn back on until that side of the grill was sufficiently cool. This caused us a delay in the serving while I worked on it. My old buddy, Ron, was minding the till and a couple in the crowd began to complain that they felt they were waiting too long. One openly bitter lady complained to Ron, so he reached over took her drink and her chips, threw them in the trash, gave her back her money, and said "Now, does anyone else want a refund?". Befuddled, the lady left the line and all complaining stopped abruptly. 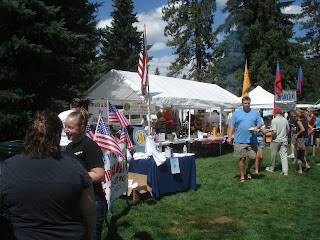 Over the years, the local chapter has honed their abilities and this year, they began preparing months before the event started. Assisting them has actually given me some pretty good perks including the ability to park right in the middle of it all so this year, I drove my own classic car in and out, ferrying goods needed to keep the BBQ rolling. It even afforded me a nice shaddy spot to park it.

The drive in and out was fun on it's own, like running a gauntlet through the various store booths on the path to their spot. Trinity went with me and likened it to the final scene in Grease as we slowly cruised through the massive crowd. 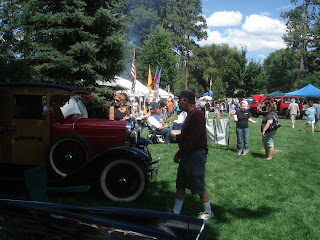 Now, many entrants had signs on their car that said "Please do not touch". If I would have been more alert, I would have made one that says, "Please touch". My little Model A Huckster got as many looks as any of the classy flashy cars around it. And I invited people to climb inside and get the real feel. I stopped this quickly when two little inquisitive children began playing with all of the knobs inside the cab. 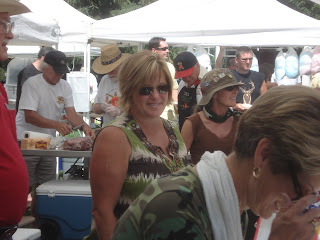 The VVA was well organized with the wives and girlfriends manning the counter area while the guys did the 'grunt' work. Since many of them were Marines, I wonder if that is where that phrase originated from?
As a manager, one of my tasks is to assess my strengths. I need to know who is better at what and who I can rely on. So, I often find myself studying things like this with those same glasses on and this was not any different. 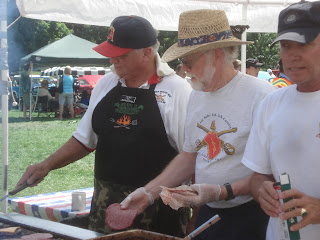 The two main anchors of the event were easy to pick out. They were the coordinators and the officers of the club, President Terry and VP LB. But, the one who stood out head and shoulders over all was LB. LB manned the grill. When I say manned, I mean that in the truest sense. He controlled all aspects of it and like a good sergeant in the field, he took the reigns and lead by example. In this case, I think he grilled just about every burger that hit the top of the BBQ. He has been aptly named and has on the front of his apron his title, "Grill Sergeant". Terry's strengths were in supply, taking charge of making sure that any backup was in place and that needed supplies were always available. 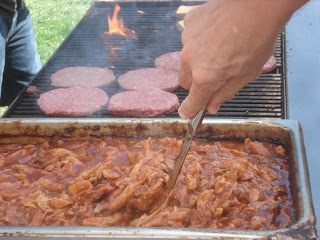 But, as I found on the 4th of July, LB was the man. The MVP you might say. With the Grill Sergeant running the grill, the line was never that long and the burgers were kept fresh and tasty contributing to what I believe was a very successful event for them.
Posted by diner life at 12:05 AM