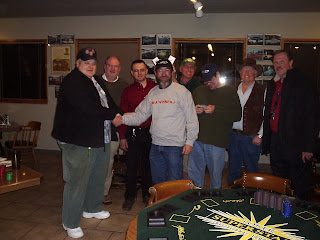 A couple of years ago, Frank Patka, Richard Smith, and I came up with an idea to have some fun and help out a good local cause, Habitat for Humanity. At the time, Richard was working for them and still does alot of volunteer work for them to this day.

Last night, we had 28 players. Frank and I made announcements and we were off and running. Richard who has taken the title of chip boss was very busy in the first fifteen minutes with rebuys (I even went all twice losing both hands). In all, over $100 was raised in rebuys alone. I was at the table with my blogger friend, Monkeyinabox, and was eliminated much quicker than I expected or wanted to be. I had the right pocket hands but not what was needed to go with them. So, I spent the rest of the night cashing out chips and talking with Richard. I asked him if he was enjoying himself even though he wasnt playing. He said, "Just seeing the smile on your face as you play is enough enjoyment for me.". I took a mental note, "You need to smile more.". I know that often times, there is so much on my mind that I can come off as a little stoic.

Frank was the target after winning the week before and Ryan Steeley took him out and earned the free meal. As the blinds raised more and more people dropped out and before we knew it, we had a final table. Four on the final table had not won yet this year but they were quickly eliminated and it became apparant to me that the winner would probably want a food coupon and I had ran out so I went back to my office to retrieve one. By the time that I returned, Karina had polished off the table and was, once again, the winner. I think that is about her third or fourth win this year and I yet to have one.....grrr.

I cleaned up and reset the backroom for the next day. We were coming up on closing time so I said my goodnights to the crew and some of our regulars that were still around. As I began to drive out of the lot, I noticed a long hauler driving in the driveway so I pulled over and waited. He parked his rig across the street from the front of the lot and began to walk in. I drove over to the door as he arrived to find it locked. Rolling down my window, I yelled out, "Hungry?". He turned and said, " I have been busting my butt to get here in time and thinking of a Jake's meal the whole way. Now, I guess I will have to wait for the morning.". "No, you won't.", I countered and jumped out and unlocked the door. "Hey, I recognize you, your Jake", he said. "Actually, the name is Lyle. Come on it and lets get you fed.". I appologized to the cook who was cleaning off his grill and sent Casey out to take his order. After saying goodnight to my new trucker friend, I relocked the door and headed home.

Judy had just left taken herself a nice hot bath and had left the water for me so after a soothing soak in the tub, I retired for the night thankful for many things. Good friends, good times, a successful venture that had now raised over $11,000 for Habitat, a nice hot bath, and the knowledge that there are still truckers out there who drive many miles just for a meal at Jake's.

I just topped it off with reading from my daughters blog. Life is good.
Posted by diner life at 4:03 AM