Jayden is always trying to set up competitions here at the diner. A couple of years ago, when his school had cup stacking competitions, he tried setting up one in our back room. I felt so bad for him that evening just sitting back there at a table with his cups in front of him waiting. But, it has never deterred him.


His most recent venture was to set up a PlayStation game competition in the same back room. He asked if he could use the big screen TV and I agreed. He came to me last week and asked how I got people to come to my events. I told him that the best way was by making up posters for them. He asked how and I said on the computer. 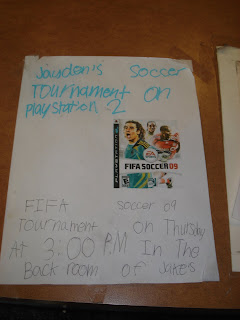 So, off he went to my office and the next thing I notice is signs all around the diner advertising his first PlayStation Soccer Tourney. They were on the doors coming in, on the counter, by the employee sign in sheets, in the waitress station, cook line, and dish room. He then followed up the signs by asking all of the employees that he could if they would come. 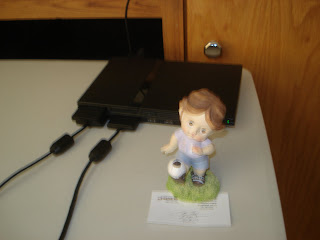 He asked about a trophy so we went down to the dollar store and looked around. He was looking for an actual trophy when I challenged him to think outside the box. What he came up with was a small glass ornament of a young boy playing soccer. I applauded him on his choice. The day of the tourney, Jay texted me asking me for a free meal for the winner. I agreed and he texted again that second place should get a chocolate bar. I agreed again and we were set. 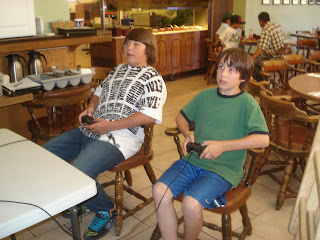 He had 6 people for his first competition. I was working in the office but agreed to compete and did quite well, winning my first two games. I was then called back out to be in the finals against the youngest kid there, Dominique (One of our cooks son). He beat me in a shootout for the win and championship of Jayden's first tourney. 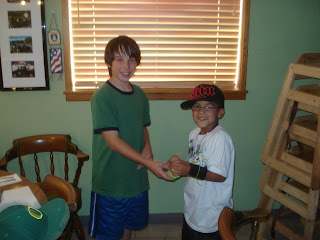 Afterwards, we had an official awards ceremony with the commissioner giving the trophy to our proud winner.


I wonder what he will be when he grows up?
Posted by diner life at 6:22 PM