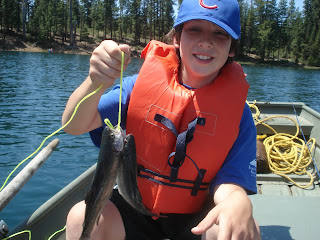 I am not much of a fisherman. I never have been. There are probably quite a few reasons but I will give you some thoughts of my own as for the reason why.

When I was young, I went out fishing with my brother and his friend. They were fishing up stream while I was swimming in the local swimming hole. I recall them coming around the corner and my brothers friend telling me to get out of his fishing hole. "You are swimming in my fishing hole.", he said. "You are fishing in my swimming hole.", I returned. "If you don't get out, I am going to just cast away.". "I don't care.", I said. Then, he did the unthinkable and cast catching me in the side of my head with a red and white wobbleright. My mom told me that it was quite a funny thing to see me walking up to the house with that lure swinging back and forth from my head. I did not see the humor at the time....I did later.
A few years later, I was fishing down at the pond in Gilchrist and I cast out over my head. The only problem was that I caught myself in the back of my head with the hook. Once again, I had to get a doctor to extract my miss cast. Dr. Goldsmith, who had done surgery on me a while before joked with me as he walked into the office. Something about being happy to see me but lets meet on different terms or something like that. I am sure my mom remembers the exact words. What is even more funny is that Dr. Goldsmith often comes into the diner now with all of the other retired docs from the area.
I did not fish for quite some time after that but towards the end of my high school years, I was asked by a fellow who worked with my brother at the mill if I wanted to join him and my brother fishing after church on Sunday. Little Joe McVey was the man that I looked up to there. I agreed and we all went out in Marvin's pickup to the river just below the dam at Wickiup. There were big signs back then saying 'No Fishing' but who reads signs. Little Joe said lets fish here. I was game but Marvin wanted to do the right thing and go down below the signs. Little Joe and I began catching fish right and left. I limited out in no time and went downstream to where Marv was not doing well at all. I left my catch close to him and returned for more. Little Joe was no where to be seen. I heard a horn honk behind me but thought nothing of it. I began casting out and was reeling in a whopper when a man standing next to me said "Hi, how is the fishing.". "Great", I said as I fought with my prey. The friendly man then said, "Did you know that it is illegal to fish here.". I looked down at his blue shirt and saw the symbol for a Fish and Wildlife officer. I was standing right next to one of the signs so what could I say. 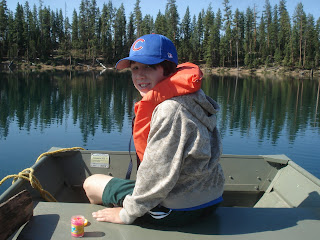 We rowed out into the middle, baited out hooks, and cast out. I took a couple of pics for the record and we began fishing and talking. We sat there in the middle of the boat both thinking of how easy the one on the dock had gone over for the big guy. We sat and just talked....about anything, sports mainly. He opened his tackle box and asked me about the various lures that were there. He picked up a red and white wobble right and so I had to tell him that story at which he got a pretty good laugh. 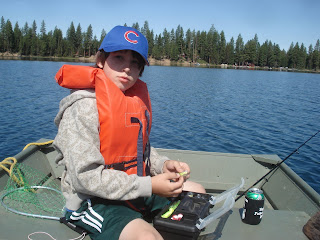 We were not even getting a nibble and I noticed that we were drifting towards another boat with three people in it who seemed to be doing pretty well. I yelled over and asked them what they were using and they said power bait. "So are we, but we are not doing well.". "That is because you are using the wrong type.", he said, "Row over here, we got plenty and will share with you.". I rowed to the boat and he handed Jay a bottle of yellow maze power bait. We thanked him and rowed away as Jay baited his hook and threw it in. Almost instantaneously, Jay had one of the hook. I grabbed the net as he reeled the fish in. I scooped up his treasure and showed Jay how to string up the fish and put it back into the water.

I had not noticed our drift and with a bump, we came to the side of the lake. I rowed us back out and just over from our new friends and we began fishing some more watching the time so that we would keep it in the four hour limit that we had set up. We set anchor to keep us there and Jay soon had another on. We netted his catch, reset the hook and cast off again. Both of us had nibbles but nothing of substance. I soon had one on but lost it in the reel in. Jay also soon had a very large one on the line, his biggest so far but we lost it just before I was able to scoop it up. 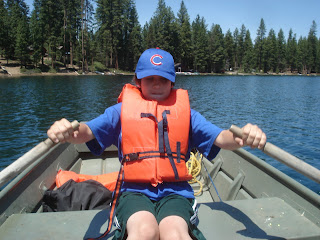 We ate our lunches without any more bites and it was soon time to head back in. Jay asked if he could row so I let him row and guided him into the dock. He did a great job and I was sure that he enjoyed himself. We took a second to take a picture and then headed home with his prize. "Mom is going to cook these for supper.", he announced. 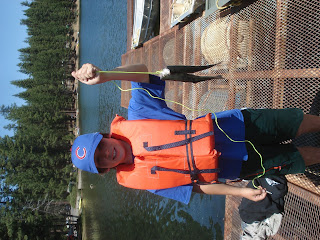 We got to the house and with Judy's help we cleaned the fish and placed them in the fridge. I called Carrie up and told her to get ready to cook some fish. "I can't do that.", she announced, "I hate the smell of them. I might even throw up.". I told her that I would talk to Jay about it before she arrived.
Jay and I went down to Jake's and began setting up for the evening poker tourney. I told him not to expect his mom to cook the fish for him as it kind of turned her stomach to think of it. "Boy, am I relieved.", he said, "I hate fish except shrimp." With a good laugh, we finished our chores and waited for his mom to arrive.
A good day of fishing....another experience with my grandson.....and I can only hope it to be a good bonding for him.
Posted by diner life at 8:21 PM