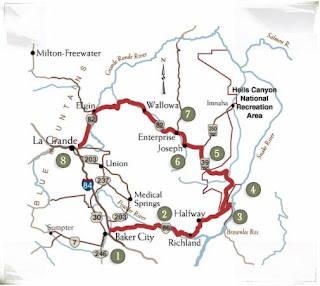 We got up in the morning and went down to the lobby for a taste of their advertised "Deluxe Continental Breakfast". That consisted of a choice of cheap white bread or sliced up "Debbies" Cinnamon Rolls. A pot of coffee was close by to help wash it down. We decided we were not that hungry and went back to the room to pack. I had my best breakfast of the trip with my leftover Stromboli from the night before. Even after being in the fridge all night and not being heated back up, it still tasted very yummy. So....when in Baker City, heed these words: You have to stop at Piazano's, paisan.

We figured that the Budget Inn must have been sold to this Indian couple and that they had made changes to cut costs which lead us even more to have wished that we would have stopped by and seen Kina first. After all, we stayed here: 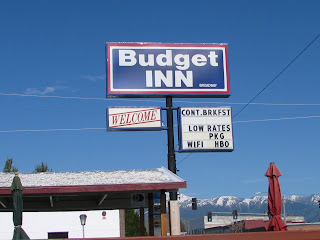 But could have stayed here: 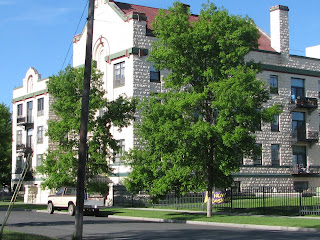 We gassed up in Baker before leaving and found the people at the gas station to be just as friendly as all of the others that we had met in Baker. As I drove up with our top down, I asked if they accepted credit cards. "You bet and we will even swipe them.", came the answer. As one of the guys started the pump, the other tackled the front window. "I'll get the back window, Bill!", joked the one attendant to the other. They even wiped the dust off of my trunk.

We started up the hill to the Oregon Trail interpretative center. It was due to open at Nine so we walked around the grounds a bit taking pictures of the great view back towards Baker City. 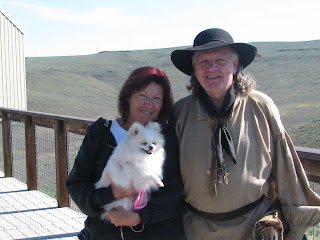 We ran into a man wearing authentic old gear that some of the old travelers may have worn and Judy talked with him for a bit before heading to the door that stated clearly, "No Pets". We knew that taking Mia with us might have some certain drawbacks and we had just met our first. So, we walked around the grounds some more taking pictures as we went. We could see down the hill where the actual ruts from the old wagons were but did not want to take the extra hour or so both ways to get to them so I just took a picture from a far.

We then headed towards Hells Canyon driving through along a very pretty section of the Powder river. The music playing on the car stereo seemed to highlight the beauty that we were seeing as we drove up through the small canyon with the river meandering through it. We stopped at a small town called Halfway. It was a very beautiful setting with the snowy Wallowa mountains in the back ground. We noticed that most of the town must have been at the baseball field watching the youngsters from the town play. It seemed so fitting and added to the lure of the place. We both commented just how down home the small village seemed to be.
From there we drove to Copperfield but noticed that the road to the dam was some forty miles longer on a windy road and since we did not intend to ride the jet boats, we turned back and then up the small road that takes you to the top of Hells Canyon and to the overlook. 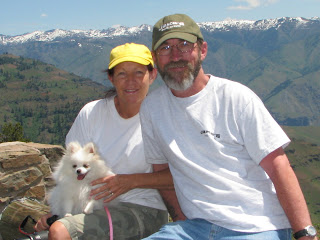 We enjoyed the overlook but even though the canyon is deeper than the Grand Canyon, it still wanes in it's splendor. We kept on the road until we came to the small town of Joseph. We loved this town that sits just below Wallowa lake. Once again, the snowy mountains accentuated the town and made it very picturesque. We stopped at the store to pick up some sandwiches and when I came out, Judy was standing in the shade of a tree talking to one of the locals. She was British and owned a bed and breakfast up the street.

We then drove up to Wallowa lake and had a nice picnic lunch before heading to the tram. I left Judy and Mia in the car to see if the tram would allow for pets. A family was standing at the ticket booth trying to decide if they wanted to all go up or not. They took no notice to me standing there and continued to argue asking the ticket person question after question. Finally, they decided to go up and had to purchase the tickets, each couple buying their own. Finally, I got up to the window to ask my question. They would not allow for any type of pets, even those in small bags so we went back to Joseph to try and find the British lady hoping that she would watch Mia. We could not find her but noticed a small white rabbit going across the road. 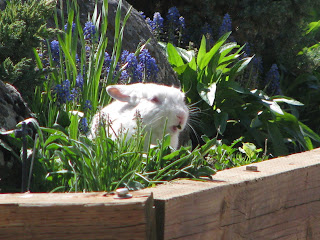 We followed the rabbit and watched as it jumped into one of the many flower gardens and munched on the flowers there. It was obviously not a wild rabbit and was very much enjoying it's lunch.

Disappointed from not being able to ride the tram,we hit the road again and drove all the way to LaGrande. We had heard good things of this town but when we got there, was very disappointed. There seemed to be nothing there for us to see. So after a pee break for Mia, Judy asked if I would mind driving back to Joseph. I already had that in my mind so we turned and drove the seventy five miles or so back to Joseph. We stopped in the only motel that we had seen there and asked if they would allow Mia. We were told quite frankly that only if we kept her in a kennel. I said that she had a bag that she stayed in and was told, "No, only a hard sided kennel and she must stay in it at all times.". We thanked her and left. I called up the British lady at the Bed and Breakfast and she said that she would gladly take us so we drove up to her place and were put in a small cabin out back. 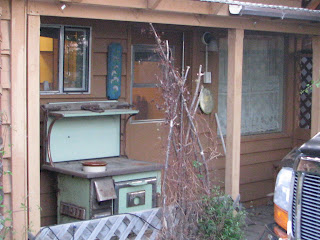 Judy loved this quaint little cabin and Our new friends, Lisa and Syd promised to watch Mia the next morning so we could take our ride up the tram. She also told us the story of the towns domestic rabbit population. Evidently, some one had let out their rabbits and as you well know, rabbits breed. Now Joseph seems to have a pretty but pesty problem. Not only do the deer eat the flowers, but so do the rabbits.

We thought that we might eat out that night on the deck above the cabin but the mosquitoes were so thick that we chose to eat in the little kitchen instead. We had Internet access and read Kina's blog of our visit before going off to bed to make ready for day three.
Posted by diner life at 8:18 AM

So glad you turned around and came back to Joseph! Chandlers Inn is a great B&B and Syd and Lisa are wonderful hosts. Too bad Mia didn't get to enjoy the tram ride, but I'll bet she had fun with the Yorkies.

Thanks for sharing your adventures.