I got up early to see my brother one more time before he was off to work. Judy showed up right after he left and we talked as Roxanne brought out yet more cat toys for Mia to destroy. 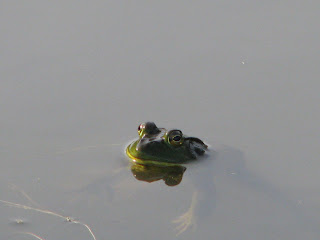 We then got our cameras out and walked over to the frog pond to get some close ups and then took a walk down the road to a small stream that fed into the little river below their house. Gypsy and Mia came with us 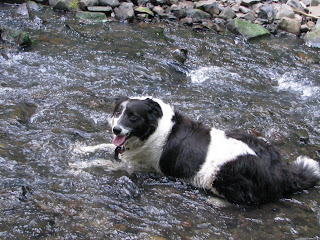 and Gypsy promptly plopped into the stream while dainty Mia wanted no part of the cold flowing mass. We teased her as being the city dog who would not get her feet wet.

We met their next door neighbors who were out trying to retrieve a horse that had gotten out. They both seemed to fit right in to their sleepy little community. He was wearing suspenders and leather chaps while she was fitted in shorts with what looked like pink and blue cowboy boots on her somewhat chubby legs. They seemed to be a happy couple with animals all around including many dogs who came out to greet us. We thanked them for the lettuce that we had eaten the night before in our scrumptious salad that went along with our BBQ.

After our walk, Roxanne drove us to Selway Falls. The drive was about thirty miles most of which was on a small gravel road. When we turned into the Selway river, we noticed something in the middle of the raging river that was swelled by the spring run off. A small deers head was bobbing up and down in the middle of the river. Helpless to do anything, we could only watch as the small deer was swept down the river. It must have been grazing too close to the river and fell in. We all openly agreed that this river was not one to be living by with small children. 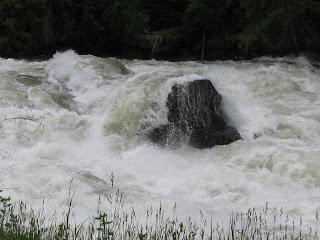 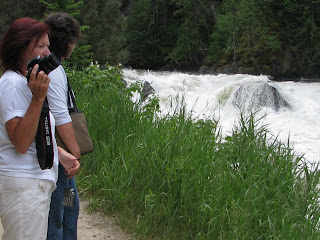 Selway falls was very beautiful and reminded me of Benham falls here in Bend. The water was very high from the run off and in most cases ran over the tops of the rocks that it usually swirled around. We took many pictures of the beautiful site before heading back to their house to continue on our journey. We stopped along the way and a small diner to have a bite. Once again, Judy and I had a great appreciation for our crew as we watched our order taker (you could not call her a server) wait while leaning against the counter for us to finish eating so that she could get her tip before she left. As I paid, she openly told me how tired she was and the manager in me wanted to agree and tell her that I was sure that counter was a pretty hard thing to keep in place. She had only been at our table twice. Once to take the order and once to deliver it. With no one else in her section, the rest of her time seemed to be spent leaning on the counter and talking there. 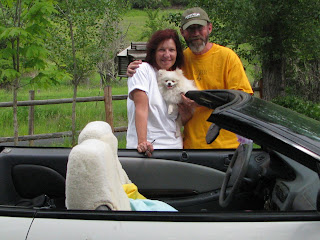 We said our goodbyes and off we went back to Lewiston and over to Walla Walla to turn south headed towards Pendleton and the underground city tour. It rained almost all the way to Lewiston which lead us to the only time on the trip that we actually drove very far with the top up. With the top up, the trip seemed to go by much slower than when we were out in the air with the sun on our heads.

We fueled up in Lewiston, put the top back down and headed into Washington. The rolling hills were a deep green and they contrasted beautifully with the blue sky and white puffy clouds. We threatened to stop and take pictures but for some reason, we never did. I can still see the sight of it, however, and mere words cannot begin to describe the beauty.

As we neared Walla Walla, I saw a billboard for a business in Pendleton. I told Judy to watch close for the Pendleton sign so that we would not miss the road. We drove and drove but saw no sign. Around 20 miles or so down the road, we came upon a small gas station store. I stopped and enquired about the where abouts of the road. The lady laughed and told me that I best head back to Walla Walla. She said that when they put in the new road, someone had taken out the sign. It seems that I was not the first person to be duped by that. One would wonder if someone might have done it on purpose and gotten quite a laugh off of others like my demise. We could only head back and follow the ladies instructions. We found that the road going east was very well marked, however, and we had no problems finding the right turn.

We pulled into Milton Freewater and called my friend, Steve, who had a small ranch there. He had told me that we were welcome to stay there if we were in the area. As Judy went in and purchased some sandwiches, I took down the page and a half worth of directions into his cabin. It was about 20 miles out of town. But what he did not say was that it was 20 miles up a mountain on some steep, dusty, and rocky roads to the top of the mountain. And that their were no other houses anywhere around it. We followed his directions and eventually came to the cabin up on top of Steve's mountain.

It was very beautiful there. A small white cabin with green shutters that sat up against some trees at the top of the mountain. Rolling hills spread out below for as far as one could see. Judy thought that it looked like something that you would find up in the Alps. We had not seen anyone for the last 10 miles or so but as we drove in the gate another truck drove by going the other way. We went in the cabin and fired up the generator. The lights glowed but were somewhat dim. The light in the bedroom blew out as I turned it on and I quickly found another bulb and fixed it. I could tell that Judy was a little uneasy and quite frankly so was I. I called Steve and talked to him on the phone and told him that we might not stay. He laughed and told me that he had stayed up there many times and had not died yet. 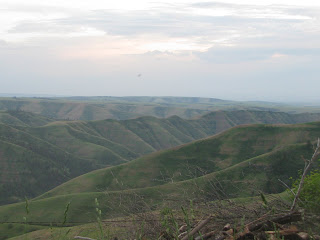 The sun was going down, there were no flashlights, the generator had to be turned off when we went to bed, and we had a decision to make. I asked Judy if she wanted to stay and she said not really. I told her that we needed to get things closed up and off the mountain then before the sun went down and we would have a hard time finding the turns that we needed to make coming back down. I came down much faster than I went up and pulled into Pendleton shortly after 9:30. We stopped at the first motel on the road into town.

After securing the room and bringing in the bags, Judy asked me to get some ice. I walked back to the office to find it locked up and dark. I came back to the room and by the instructions on the phone pushed 0. A lady answered the phone and I asked about where the ice was. "It is in the kitchen.", she said, "and it is after 10 and the office is now closed. There is no ice after 10." I told her that was well and good if we had been told when we first got there and that we had only checked in minutes before. She reluctantly agreed to bring us out some ice. I met her outside. She came out in her nightdress with a bag of ice that she placed in my bucket. I thanked her but she said nothing as she turned and went back inside. I brought Judy her ice and told her that I thought that I had made the lady mad.

With a nice hot shower and a very soft bed, we both settled down from another very long and yet fulfilling day. We laughed and talked of the things and experiences we had gone through for the day before both of us drifted off to sleep and to another day.