When we first started, we only had two places on our agenda. Baker City and Hells Canyon. But many people who we had talked with told us that if we were anywhere near Pendleton, we needed to see the underground city. So, here we were in Pendleton.

We woke up that morning and went down to our continental breakfast. This motel had a large sign outside that labeled it a bed and breakfast motel. The breakfast was considerably better than the Budget in Baker but I am not sure that I would call it breakfast. While I was there, I looked for the ice machine that the lady on the phone had told me about the night before. After not finding one, Judy and I went to the office to ask. The lady on the phone who I assumed was the owner was there. This time fully dressed and smiling, at least until I asked her for the where abouts of the ice machine. With a little scowl, she said, "The ice machine is in the kitchen. We get the ice for you.". So, I asked her to get me some ice. I wanted to ask her why she hid the ice machine and if there were vicious ice thieves around but she didn't seem like the type who would get that sort of humor so I let it go.

We checked out knowing that we had an hour or so before the office for the underground tour opened up. We decided to take a walk along the river path that ran the length of the town. The people in Pendleton were almost as different as night and day from the ones that we had met in Baker. As we met them on our walk, very few drew eye contact and most did not answer an hello. The path itself didn't seem that inviting either. The hill down to the river was littered with a variety of trash including an old discarded diaper that was beginning to crust. We saw a man with a bag of cans cross over the cement fence that guarded the path from the river with his dog. He actually drug his dog across the fence and then went down the small hill to a patch of trees that I figured held his camp. Before we got back to our car, we ran across a group of gang banger wanna be kids on their bikes. It was really not very inviting so we got back in our car and drove to the office for the underground tour.

The office opened and I took Mia in for them to see hoping that I could talk them into letting her come while in her bag. The very friendly lady at the desk said no but that she would gladly watch Mia while we took the tour. Judy came in to meet her and felt comfortable with that so we booked the first open tour an hour later. We found a nice shady spot across the street in front of a small bakery and sat out on one of their outdoor tables with a cup of coffee while we waited.

I really enjoyed the tour which took us through some very interesting parts of old Pendleton including a Chinese laundry, an ice cream parlor, and a full meat market ran by four brothers where they took in the beef in a yard across the street, One brother slaughtered, one butchered, one sold, and one did the books. 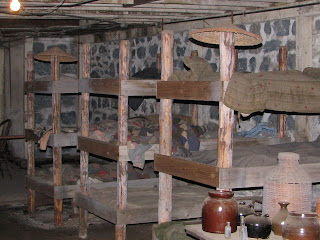 The main part of the series of tunnels that was under the town were dug by the Chinese people who lived there who feared coming up into the town for fear of losing their lives. I was saddened by how we treated these peoples and wondered how a society could be so cruel as to allow that but if we go to many other countries today we will see very much the same thing. We were taken to where they slept, ate, and to one of their opium dens where they deadened their minds to what they were going through.

We were also taken to some of the underground clubs that were in the town during the prohibition days. The designed ceilings showed that at one time, these speak easy clubs were highly decorated plush establishments. We were shown the bells system that were used to warn the clubs of impending police and the escape routes taken from the raids. But the most interesting part of the tour was through a old brothel that was uncovered years later after it was boarded up. The brothel was very much in place and we were taken through it's rooms while given the story of the lady who ran it. Many women who found themselves single back in those days had to take this type of route to just survive but this lady did something that you would not expect. Back in those days for a woman to survive, she needed a man to protect her. This madam taught these prostitutes to be ladies and to help them out of the business. She taught them how to cook, sew, and dress. She also brought a preacher in on Sunday mornings to have a service. She worked in the community helping people in need and it was said that she rarely turned down anyone who came to her for support.

A pastor of a local church got a hold of two lists. One being the women that were working in the brothel and the other being the men in town who frequented the establishment. He threatened to read that list from his pulpit on Sunday unless the city fathers did something. The city fathers, some of whom were on the list, shut down the brothel and made the madam move to a less noticeable part of the town.

As I listened to the story of this woman who when she died had the second largest funeral in the town's history. I contrasted her story to the one of the pastor of the church and wondered just which one of these people truly had the mind of Christ. Now I am sure that there are more to both of them but if their works are a sign of their mind, then one would truly have to wonder.

After leaving this enjoyable interlude on our trip, we jumped back in the car and headed towards the Columbia. We had decided to take the Washington side as we felt that it might be more scenic. We crossed over and hit Highway 14 and drove it all the way to Biggs Junction where we stopped at the rebuild of Stonehenge. 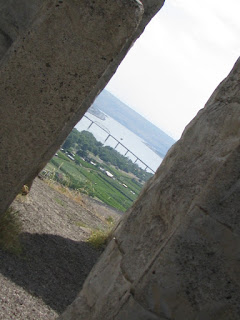 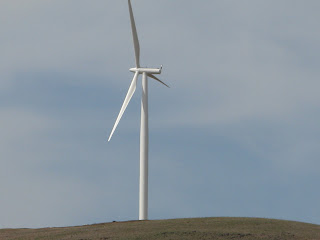 As we drove we noticed miles and miles of wind generators that are in place and being built along the windy area of the Columbia. The looked like something from outer space and we both wondered how effiecient the electricity that they provide is. We then drove back over to the Oregon side and down to Hood River where we intended to stay for the night. Hood River seemed to be over flowing with people so we turned back to the Dalles hoping to stay in a small motel up on the hill that I had stayed in years back. We found the motel and drove up to it. All of the signs were in place but as we drove around to the back of the motel, we noticed things that seemed out of place and when we arrived at the parking lot found no cars and a closed up office. The motel had either closed down or was being renovated. Judy really liked the view there however so we checked in at the Shilo Inn that was right down the hill. Our room over looked the dam and the bridge going over the river and also had some very old buildings just below the motel that were very photographic. 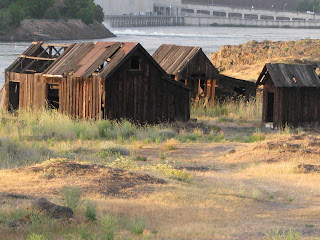 It was by far the most expensive room that we had along the way but it was to be the last night and the view was very nice so we settled down for our last night on the road besides they also offered us breakfast in their restaurant before we were to leave.
Posted by diner life at 8:14 AM

Hi Lyle it sounds like you, Judy and Mia had a great trip!! when you were at Stonehenge you were only about 12 miles from me, you could have came up to Goldendale and stayed with us!! I'm glad you both got away for a few days :) take good care...
Lana

Wow, I thought you were in Yakima. The couple that we met in Joseph at the bed and breakfast were from Goldendale.